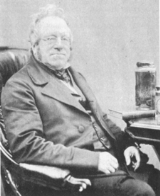 Encyclopedia
John Edward Gray, FRS  (12 February 1800 – 7 March 1875) was a British
United Kingdom
The United Kingdom of Great Britain and Northern IrelandIn the United Kingdom and Dependencies, other languages have been officially recognised as legitimate autochthonous languages under the European Charter for Regional or Minority Languages...
zoologist
Zoology
Zoology |zoölogy]]), is the branch of biology that relates to the animal kingdom, including the structure, embryology, evolution, classification, habits, and distribution of all animals, both living and extinct...
. He was the elder brother of George Robert Gray
George Robert Gray
George Robert Gray FRS was an English zoologist and author, and head of the ornithological section of the British Museum, now the Natural History Museum, in London for forty-one years...
and son of the pharmacologist and botanist Samuel Frederick Gray
Samuel Frederick Gray
Samuel Frederick Gray was a British botanist, mycologist, and pharmacologist. He was the father of the zoologists John Edward Gray and George Robert Gray.-Background:...
(1766–1828).

Gray was Keeper of Zoology at the British Museum
British Museum
The British Museum is a museum of human history and culture in London. Its collections, which number more than seven million objects, are amongst the largest and most comprehensive in the world and originate from all continents, illustrating and documenting the story of human culture from its...
in London
London
London is the capital city of :England and the :United Kingdom, the largest metropolitan area in the United Kingdom, and the largest urban zone in the European Union by most measures. Located on the River Thames, London has been a major settlement for two millennia, its history going back to its...
from 1840 until Christmas 1874, before the Natural History
Natural History
Natural history is the scientific study of plants or animals.Natural History may also refer to:In science and medicine:* Natural History , Naturalis Historia, a 1st-century work by Pliny the Elder...
holdings were split off to the Natural History Museum
Natural History Museum
The Natural History Museum is one of three large museums on Exhibition Road, South Kensington, London, England . Its main frontage is on Cromwell Road...
. He published several catalogues of the museum collections that included comprehensive discussions of animal
Animal
Animals are a major group of multicellular, eukaryotic organisms of the kingdom Animalia or Metazoa. Their body plan eventually becomes fixed as they develop, although some undergo a process of metamorphosis later on in their life. Most animals are motile, meaning they can move spontaneously and...
groups as well as descriptions of new species
Species
In biology, a species is one of the basic units of biological classification and a taxonomic rank. A species is often defined as a group of organisms capable of interbreeding and producing fertile offspring. While in many cases this definition is adequate, more precise or differing measures are...
. He improved the zoological collections to make them amongst the best in the world.

Gray was born in Walsall
Walsall
Walsall is a large industrial town in the West Midlands of England. It is located northwest of Birmingham and east of Wolverhampton. Historically a part of Staffordshire, Walsall is a component area of the West Midlands conurbation and part of the Black Country.Walsall is the administrative...
, but his family soon moved to London
London
London is the capital city of :England and the :United Kingdom, the largest metropolitan area in the United Kingdom, and the largest urban zone in the European Union by most measures. Located on the River Thames, London has been a major settlement for two millennia, its history going back to its...
, where Gray studied medicine
Medicine
Medicine is the science and art of healing. It encompasses a variety of health care practices evolved to maintain and restore health by the prevention and treatment of illness....
. He assisted his father in writing The Natural Arrangement of British Plants (1821). After being blackballed by the Linnean Society he turned his interest from botany
Botany
Botany, plant science, or plant biology is a branch of biology that involves the scientific study of plant life. Traditionally, botany also included the study of fungi, algae and viruses...
to zoology
Zoology
Zoology |zoölogy]]), is the branch of biology that relates to the animal kingdom, including the structure, embryology, evolution, classification, habits, and distribution of all animals, both living and extinct...
. He began his zoological career by volunteering to collect insect
Insect
Insects are a class of living creatures within the arthropods that have a chitinous exoskeleton, a three-part body , three pairs of jointed legs, compound eyes, and two antennae...
s for the British Museum at age 15. He officially joined the Zoological Department in 1824 to help John George Children
John George Children
John George Children was a British chemist, mineralogist and zoologist.Children studied at Queens' College, Cambridge. In 1822 he was working as a librarian in the Department of Antiquities at the British Museum when he was appointed assistant keeper of the Natural History Department in succession...
catalog the reptile
Reptile
Reptiles are members of a class of air-breathing, ectothermic vertebrates which are characterized by laying shelled eggs , and having skin covered in scales and/or scutes. They are tetrapods, either having four limbs or being descended from four-limbed ancestors...
collection. In 1840 he took over from Children as Keeper of Zoology, which he continued for 35 years, publishing well over 1000 papers. He named many cetacea
Cetacea
The order Cetacea includes the marine mammals commonly known as whales, dolphins, and porpoises. Cetus is Latin and is used in biological names to mean "whale"; its original meaning, "large sea animal", was more general. It comes from Ancient Greek , meaning "whale" or "any huge fish or sea...
n species, genera, subfamilies, and families.

Gray was also interested in postage stamp
Postage stamp
A postage stamp is a small piece of paper that is purchased and displayed on an item of mail as evidence of payment of postage. Typically, stamps are made from special paper, with a national designation and denomination on the face, and a gum adhesive on the reverse side...
s; on 1 May 1840, the day the Penny Black
Penny Black
The Penny Black was the world's first adhesive postage stamp used in a public postal system. It was issued in Britain on 1 May 1840, for official use from 6 May of that year....
first went on sale, he purchased several with the intent to save them, thus making him the world's first known stamp collector.

During his fifty years employed at the British Museum Gray wrote nearly 500 papers, including many descriptions of species new to science. These had been presented to the Museum by collectors from around the world, and included all branches of zoology, although Gray usually left the descriptions of new birds to his younger brother and colleague George. He was also active in malacology
Malacology
Malacology is the branch of invertebrate zoology which deals with the study of the Mollusca , the second-largest phylum of animals in terms of described species after the arthropods. Mollusks include snails and slugs, clams, octopus and squid, and numerous other kinds, many of which have shells...
, the study of molluscs.
On his death he was buried at St Mary's Church, Lewisham.


Taxa named by him and in his honor

Gray described and named numerous marine snail
Snail
Snail is a common name applied to most of the members of the molluscan class Gastropoda that have coiled shells in the adult stage. When the word is used in its most general sense, it includes sea snails, land snails and freshwater snails. The word snail without any qualifier is however more often...
s including:

Species named in his honour include: