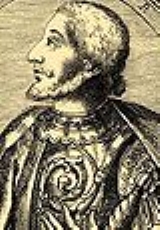 Charles the Short or Charles of Durazzo (1345 – 24 February 1386) was King of Naples and titular King of Jerusalem from 1382 to 1386 as Charles III, and King of Hungary
King of Hungary
The King of Hungary was the head of state of the Kingdom of Hungary from 1000 to 1918.The style of title "Apostolic King" was confirmed by Pope Clement XIII in 1758 and used afterwards by all the Kings of Hungary, so after this date the kings are referred to as "Apostolic King of...
from 1385 to 1386 as Charles II. In 1382 Charles created the order of Argonauts of Saint Nicholas. In 1383 he succeeded to the Principality of Achaea
Principality of Achaea
The Principality of Achaea or of the Morea was one of the three vassal states of the Latin Empire which replaced the Byzantine Empire after the capture of Constantinople during the Fourth Crusade. It became a vassal of the Kingdom of Thessalonica, along with the Duchy of Athens, until Thessalonica...
on the death of James of Baux
James of Baux
James of Baux , Duke of Andria, was the last titular Latin Emperor of Constantinople from 1374 to 1383 and Prince of Achaea from 1382 to 1383....
.


Charles in Hungary and the Succession in Naples

He was the son of Louis of Durazzo
Louis of Durazzo
Louis of Durazzo was Count of Gravina and Morrone. He was the son of John of Gravina and Agnes of Périgord.In 1337, he was named Vicar- and Captain-General of the Kingdom of Albania. During the ascension of the Durazzeschi at the court of Naples during the reign of Joan I, he was one of the royal...
and Margaret of Sanseverino. As the great-grandchild of King Charles II of Naples
Charles II of Naples
Charles II, known as "the Lame" was King of Naples, King of Albania, Prince of Salerno, Prince of Achaea and Count of Anjou.-Biography:...
, he was a second cousin to Queen Joan I
Joan I of Naples
Joan I , born Joanna of Anjou, was Queen of Naples from 1343 until her death. She was also Countess of Provence and Forcalquier, Queen consort of Majorca and titular Queen of Jerusalem and Sicily 1343–82, and Princess of Achaea 1373/5–81....
(both agnatically
Agnatic seniority
Agnatic seniority is a patrilineal principle of inheritance where the order of succession to the throne prefers the monarch's younger brother over the monarch's own sons. A monarch's children succeed only after the males of the elder generation have all been exhausted...
) and also adopted by her as a child, since he was the only male of the senior Angevin line of Sicily after the death of Charles' father Louis of Durazzó (he died imprisoned by orders of Queen Joan). Joan I was infatuated with him throughout her life. However, much to her displeasure, her romantic interest in him was never requited (In 1369 he married Margaret of Durazzo, the daughter of Joan's younger sister Marie, and his own first cousin).

Decades earlier, Joan ordered the murder of her husband Prince Andrew of Calabria
Andrew, Duke of Calabria
Andrew, Duke of Calabria was the second surviving son of Charles I of Hungary and Elizabeth of Poland...
, brother of King Louis I of Hungary in 1345. After this the King led two campaigns against Naples, until he finally succeeded and Joan was forced to capitulate and during these negotiations Charles's future was settled. In 1365 the Pope requested the King Louis I of Hungary the caring and education of Charles, so he left Naples moving to the Hungarian court being 11 years old. Charles soon gained the trust and sympathy of the Hungarian King and his people and was entrusted with the government of the regions of Croatia and Dalmatia (which were part of the Hungarian Kingdom by that time). Charles held the title of Duke of Croatia and Dalmatia between 1371 and 1376, gaining many devotees between the Hungarian lords of the south. When the war between Hungary and Venice was declared, Charles acted as ambassador in 1379, negotiating in the conflict.

The conflict between Joan and Pope Urban VI caused the Pope (as feudal overlord of the kingdom) to declare her dethroned in 1381 and give the kingdom to Charles. He marched on the Kingdom of Naples
Kingdom of Naples
The Kingdom of Naples, comprising the southern part of the Italian peninsula, was the remainder of the old Kingdom of Sicily after secession of the island of Sicily as a result of the Sicilian Vespers rebellion of 1282. Known to contemporaries as the Kingdom of Sicily, it is dubbed Kingdom of...
with a Hungarian army, defeated the King Consort Otto, Duke of Brunswick-Grubenhagen
Otto, Duke of Brunswick-Grubenhagen
Otto, Duke of Brunswick and Lunenburg was the fourth and last husband of Joan I of Naples. He also held the title of Prince of Taranto nicknamed as Otto the Tarantine.-Biography:...
at San Germano, seized the city and besieged her in the Castel dell'Ovo
Castel dell'Ovo
Castel dell'Ovo is a castle located on the former island of Megaride, now a peninsula, on the gulf of Naples...
. After Otto's failed attempt to relieve her, Charles captured her and had her imprisoned at San Fele
San Fele
San Felè is a town and comune in the province of Potenza in the Basilicata region of Italy.-Geography:It is bounded by the comuni of Atella, Bella, Castelgrande, Filiano, Muro Lucano, Rapone and Ruvo del Monte.-History:...
. Soon afterwards, when reached by news that her adopted heir, Louis I of Anjou, was setting an expedition to conquer back Naples, Charles had the Queen strangled in prison in 1382. Then he succeeded to the crown.

Louis's expedition counted to some 40,000 troops, including those of Amadeus VI of Savoy, and had the financial support of Antipope Clement VII
Antipope Clement VII
Robert of Geneva was elected to the papacy as Pope Clement VII by the French cardinals who opposed Urban VI, and was the first Avignon antipope of the Western Schism.-Biography:...
and Bernabò Visconti
Bernabo Visconti
Bernabò Visconti was an Italian soldier and statesman, who was Lord of Milan.-Life:He was born in Milan, the son of Stefano Visconti and Valentina Doria. From 1346 to 1349 he lived in exile, until he was called back by his uncle Giovanni Visconti...
of Milan. Charles, who counted on the mercenary companies under John Hawkwood and Bartolomeo d'Alviano, for a total of some 14,000 men, was able to divert the French from Naples to other regions of the kingdom and to harass them with guerrilla tactics. Amadeus fell ill and died in Molise on 1 March 1383, and his troops abandoned the field. Louis asked for help to his king in France, who sent him an army under Enguerrand VII, Lord of Coucy. The latter was able to conquer Arezzo
Arezzo
Arezzo is a city and comune in Central Italy, capital of the province of the same name, located in Tuscany. Arezzo is about 80 km southeast of Florence, at an elevation of 296 m above sea level. In 2011 the population was about 100,000....
and then invade the Kingdom of Naples, but midway was reached by the news that Louis had suddenly died at Bisceglie on 20 September 1384.

In the meantime relationships with Urban VI became strained, as he suspected that Charles was plotting against him. In January 1385 he had six cardinals arrested, and one, under torture, revealed Charles' conjure. He thus excommunicated Charles, his wife and raised an interdict over the Kingdom of Naples. The King replied sending Alberico da Barbiano
Alberico da Barbiano
Alberico da Barbiano was the first of the Italian condottieri. His master in military matters was the English mercenary John Hawkwood, known in Italy as Giovanni Acuto...
to besiege the pope in Nocera
Nocera Inferiore
Nocera Inferiore, formerly Nocera dei Pagani, is a town and comune in Campania, Italy, in the province of Salerno, at the foot of Monte Albino, 20 km east-south-east of Naples by rail.-History:...
. After six months of siege, Urban was freed by two Neapolitan barons who had sided with Louis of Anjou, Raimondello Orsini and Tommaso di Sanseverino.

While Urban took refuge in Genoa, Charles left the Kingdom to move to Hungary. Here, on the death of Louis I of Hungary, he had claimed the Hungarian throne as the senior Angevin
Capetian House of Anjou
The Capetian House of Anjou, also known as the House of Anjou-Sicily and House of Anjou-Naples, was a royal house and cadet branch of the direct House of Capet. Founded by Charles I of Sicily, a son of Louis VIII of France, the Capetian king first ruled the Kingdom of Sicily during the 13th century...
male, and ousted Louis' daughter Mary of Hungary
Mary of Hungary
Mary of Anjou was queen regnant of Hungary from 1382 until her death in 1395.-Childhood:...
in December, 1385. It wasn't difficult for him to reach the power, as he counted with the support of several Hungarian lords of the south, and many contacts which he made during his period as Duke of Croatia and Dalmatia. However, Elisabeth of Bosnia
Elisabeth of Bosnia
Elizabeth of Bosnia was Queen of Hungary from 1353 until 1382 and Queen of Poland from 1370 until 1382 as the second wife of King Louis the Great. After her tenure as queen consort, Elizabeth served as regent for her daughter Mary.As queen consort, Elizabeth was overshadowed by her domineering...
, widow of Louis and mother of Mary, arranged to have Charles assassinated on 7 February 1386. He died of wounds at Visegrád
Visegrád
Visegrád is a small castle town in Pest County, Hungary.Situated north of Budapest on the right bank of the Danube in the Danube Bend, Visegrád has a population 1,654 as of 2001...
on 24 February.

He was buried in Belgrade
Belgrade
Belgrade is the capital and largest city of Serbia. It is located at the confluence of the Sava and Danube rivers, where the Pannonian Plain meets the Balkans. According to official results of Census 2011, the city has a population of 1,639,121. It is one of the 15 largest cities in Europe...
. His son Ladislaus (named in honor of the King-Knight Saint Ladislaus I of Hungary) succeeded him in Naples, while the regents of Mary of Hungary reinstated her as Queen of Hungary. However Ladislaus will try to obtain the crown of Hungary in the future.

Charles III and Margaret of Durazzo had three children: