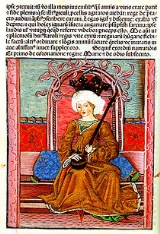 For the Habsburg consort of Louis II of Hungary, later Regent of the Netherlands, see Mary of Austria (1505–1558)

She was the eldest surviving daughter of King Louis the Great of Hungary and his second wife Elizabeth of Bosnia.

After the death of her older sister Catherine
Catherine of Hungary (1370-1378)
Catherine of Hungary was the eldest child of King Louis I of Hungary and his second queen, Elizabeth of Bosnia.-Heiress presumptive:Catherine's birth was long expected, as her parents' marriage was childless for the first seventeen years...
, Mary was intended to inherit both of her father's kingdoms, Hungary and Poland
Poland
Poland , officially the Republic of Poland , is a country in Central Europe bordered by Germany to the west; the Czech Republic and Slovakia to the south; Ukraine, Belarus and Lithuania to the east; and the Baltic Sea and Kaliningrad Oblast, a Russian exclave, to the north...
, or at least the hereditary kingdom of Poland. When her father died, however, she inherited only Hungary, and Poland was awarded to her younger sister Hedwig
Jadwiga of Poland
Jadwiga was monarch of Poland from 1384 to her death. Her official title was 'king' rather than 'queen', reflecting that she was a sovereign in her own right and not merely a royal consort. She was a member of the Capetian House of Anjou, the daughter of King Louis I of Hungary and Elizabeth of...
by its nobility, which objected to the personal union of Hungary and Poland that prevailed under Louis the Great.

Mary's father had arranged marriages for her and her younger sister Hedwig
Jadwiga of Poland
Jadwiga was monarch of Poland from 1384 to her death. Her official title was 'king' rather than 'queen', reflecting that she was a sovereign in her own right and not merely a royal consort. She was a member of the Capetian House of Anjou, the daughter of King Louis I of Hungary and Elizabeth of...
. Ultimately Sigismund of Luxemburg, an heir of the Polish Kujavian dynasty and a member of Bohemia
Bohemia
Bohemia is a historical region in central Europe, occupying the western two-thirds of the traditional Czech Lands. It is located in the contemporary Czech Republic with its capital in Prague...
n royal family, married Mary in 1385 at Zvolen Castle
Zvolen Castle
Zvolen Castle is a medieval castle located on a hill near the center of Zvolen, in central Slovakia.The original seat of the region was above the confluence of Slatina and Hron rivers on a steep cliff in a castle from the 12th century, known today as Pustý hrad...
. William of Austria was to marry her younger sister, but when she unexpectedly became Queen of Poland in 1384, William married her cousin, the future Queen Joan II of Naples
Joan II of Naples
Joan II was Queen of Naples from 1414 to her death, upon which the senior Angevin line of Naples became extinct. As a mere formality, she used the title of Queen of Jerusalem, Sicily, and Hungary....
, and Hedwig was married to Jogaila
Jogaila
Jogaila, later 'He is known under a number of names: ; ; . See also: Jogaila : names and titles. was Grand Duke of Lithuania , king consort of Kingdom of Poland , and sole King of Poland . He ruled in Lithuania from 1377, at first with his uncle Kęstutis...
of Lithuania.

Mary became Queen regnant
Queen regnant
A queen regnant is a female monarch who reigns in her own right, in contrast to a queen consort, who is the wife of a reigning king. An empress regnant is a female monarch who reigns in her own right over an empire....
of Hungary as a ten-year-old child after her father's death in 1382 (her elder sister Catherine having died four years earlier). Until she reached adulthood, the country was ruled by Mary's mother, the Dowager Queen Elizabeth and by Palatine Nicholas I Garay
Nicholas I Garay
Nicholas I Garay , Croatia of Gorjani/Gara, form city Đakovo, the chief governor of Bratislava, was a palatine to the King of Hungary . He was Palatine of Pozsony and he was Count of Pozsony ; Count of Baranya ; and Duke of Mаčva...
. Sigismund, his brother Emperor Wenceslaus
Wenceslaus, King of the Romans
Wenceslaus ) was, by election, German King from 1376 and, by inheritance, King of Bohemia from 1378. He was the third Bohemian and second German monarch of the Luxembourg dynasty...
and many noblemen of Hungary were opposed to them; some noblemen helped Mary's relative Charles of Durazzo, King of Naples
Kingdom of Naples
The Kingdom of Naples, comprising the southern part of the Italian peninsula, was the remainder of the old Kingdom of Sicily after secession of the island of Sicily as a result of the Sicilian Vespers rebellion of 1282. Known to contemporaries as the Kingdom of Sicily, it is dubbed Kingdom of...
, to become the King of Hungary briefly in 1385. Queen Elizabeth and Garai had Charles assassinated in 1386. Charles's heir was his underage son Ladislaus of Naples (d. 1414), who attempted all his life to conquer Hungary
Hungary
Hungary , officially the Republic of Hungary , is a landlocked country in Central Europe. It is situated in the Carpathian Basin and is bordered by Slovakia to the north, Ukraine and Romania to the east, Serbia and Croatia to the south, Slovenia to the southwest and Austria to the west. The...
, but despite some support in the country, did not succeed.

The magnates of Lesser Poland had been deeply dissatisfied with the personal union
Personal union
A personal union is the combination by which two or more different states have the same monarch while their boundaries, their laws and their interests remain distinct. It should not be confused with a federation which is internationally considered a single state...
with Hungary under Louis the Great that lasted between 1370 and 1382, and despite of a decreed order of succession, they chose the nine-year-old Hedwig as Queen of Poland in 1384. After a couple of years, Hedwig was compelled to leave Hungary for Poland. Mary and her guardians never succeeded in establishing control over Poland. Halych
Halych
Halych is a historic city on the Dniester River in western Ukraine. The town gave its name to the historic province and kingdom of Kingdom of Galicia–Volhynia, of which it was the capital until the early 14th century, when the seat of the local princes was moved to Lviv...
, the Ruthenia
Ruthenia
Ruthenia is the Latin word used onwards from the 13th century, describing lands of the Ancient Rus in European manuscripts. Its geographic and culturo-ethnic name at that time was applied to the parts of Eastern Europe. Essentially, the word is a false Latin rendering of the ancient place name Rus...
n province recently annexed by Poland, however, was taken over by Hungary, however, although Poland recovered it again after only a few years.

Although Sigismund, his brother Wenceslaus and many noblemen of Hungary were opposed to the rule of the Dowager Queen Elizabeth, they were not enthuasiastic about Sigismund reigning together with Mary, either. Both Sigismund and Mary's cousin Charles of Durazzo
Charles III of Naples
Charles the Short or Charles of Durazzo was King of Naples and titular King of Jerusalem from 1382 to 1386 as Charles III, and King of Hungary from 1385 to 1386 as Charles II. In 1382 Charles created the order of Argonauts of Saint Nicholas...
, who had gained the Crown of Naples by having his aunt Joan
Joan I of Naples
Joan I , born Joanna of Anjou, was Queen of Naples from 1343 until her death. She was also Countess of Provence and Forcalquier, Queen consort of Majorca and titular Queen of Jerusalem and Sicily 1343–82, and Princess of Achaea 1373/5–81....
murdered, threatened to invade Hungary; Sigismund intended to marry Mary and reign together with her, whereas Charles intended to depose Mary. Either way, Dowager Queen Elizabeth would have lost her power. Thus, in 1384, Elizabeth started negotiating with King Charles V of France
Charles V of France
Charles V , called the Wise, was King of France from 1364 to his death in 1380 and a member of the House of Valois...
about the possibility of his son Louis marrying Mary, notwithstanding Mary's engagement to Sigismund. Louis had already been engaged to Mary's older sister Catherine
Catherine of Hungary (1370-1378)
Catherine of Hungary was the eldest child of King Louis I of Hungary and his second queen, Elizabeth of Bosnia.-Heiress presumptive:Catherine's birth was long expected, as her parents' marriage was childless for the first seventeen years...
and was expected to succeed to the throne of Hungary. If Elizabeth had made this proposal in 1378, after Catherine's death, the fact that the French king and the Hungarian king did not recognize the same pope would have represented a problem. However, Elizabeth was desperate in 1384 and was not willing to let the schism stand in the way of the negotiations. Antipope Clement VII
Antipope Clement VII
Robert of Geneva was elected to the papacy as Pope Clement VII by the French cardinals who opposed Urban VI, and was the first Avignon antipope of the Western Schism.-Biography:...
issued a dispensation that annulled Mary's betrothal to Sigismund and a proxy marriage
Proxy marriage
A proxy wedding or is a wedding in which the bride or groom is not physically present, usually being represented instead by another person...
to Louis was celebrated in April 1385. However, the marriage was not recognized by the Hungarian noblemen who adhered to Pope Urban VI
Pope Urban VI
Pope Urban VI , born Bartolomeo Prignano, was Pope from 1378 to 1389.-Biography:Born in Itri, he was a devout monk and learned casuist, trained at Avignon. On March 21, 1364, he was consecrated Archbishop of Acerenza in the Kingdom of Naples...
.

Elizabeth and Mary were captured in 1386 by the powerful Horvat brothers, Paul, Bishop of Machva, and Ladislaus, but probably on the orders of Mary's seventeen-year-old husband and co-ruler Sigismund.

On the first anniversary of the death of Charles II, January 1387, Elizabeth was strangled before Mary's eyes.

From 1387, Mary and Sigismund were officially joint rulers of Hungary, but in fact the estranged husband Sigismund ruled alone. Mary died on 17 May 1395, the same day as the Battle of Rovine
Battle of Rovine
The Battle of Rovine took place on 17 May 1395 between the Wallachian army led by Voivod Mircea cel Bătrân against the Ottoman invasion led by sultan Bayezid I. The Ottoman army, numbering approximately 40,000 men, faced the much smaller Wallachian army, which was about 10,000 men...
, under suspicious circumstances, while heavily pregnant, but leaving no surviving children. In 1405, probably on Christmas Day, somewhat secretly, Sigismund remarried, or was compelled to marry, Barbara of Cilli, Mary's kinswoman. In 1410, Sigismund was elected Holy Roman Emperor.