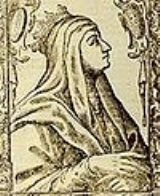 Encyclopedia
Joan II was Queen of Naples
Kingdom of Naples
The Kingdom of Naples, comprising the southern part of the Italian peninsula, was the remainder of the old Kingdom of Sicily after secession of the island of Sicily as a result of the Sicilian Vespers rebellion of 1282. Known to contemporaries as the Kingdom of Sicily, it is dubbed Kingdom of...
from 1414 to her death, upon which the senior Angevin
Capetian House of Anjou
The Capetian House of Anjou, also known as the House of Anjou-Sicily and House of Anjou-Naples, was a royal house and cadet branch of the direct House of Capet. Founded by Charles I of Sicily, a son of Louis VIII of France, the Capetian king first ruled the Kingdom of Sicily during the 13th century...
line of Naples became extinct. As a mere formality, she used the title of Queen of Jerusalem, Sicily, and Hungary
King of Hungary
The King of Hungary was the head of state of the Kingdom of Hungary from 1000 to 1918.The style of title "Apostolic King" was confirmed by Pope Clement XIII in 1758 and used afterwards by all the Kings of Hungary, so after this date the kings are referred to as "Apostolic King of...
.

Joan was born at Zadar
Zadar
Zadar is a city in Croatia on the Adriatic Sea. It is the centre of Zadar county and the wider northern Dalmatian region. Population of the city is 75,082 citizens...
, Dalmatia
Dalmatia
Dalmatia is a historical region on the eastern coast of the Adriatic Sea. It stretches from the island of Rab in the northwest to the Bay of Kotor in the southeast. The hinterland, the Dalmatian Zagora, ranges from fifty kilometers in width in the north to just a few kilometers in the south....
on 25 June 1373, as the daughter of Charles III of Naples
Charles III of Naples
Charles the Short or Charles of Durazzo was King of Naples and titular King of Jerusalem from 1382 to 1386 as Charles III, and King of Hungary from 1385 to 1386 as Charles II. In 1382 Charles created the order of Argonauts of Saint Nicholas...
and Margherita of Durazzo
Margherita of Durazzo
Margaret of Durazzo was Queen of Naples and Hungary and Princess of Achaea as the spouse of Charles III of Naples, and later regent of Naples during the minority of her son....
. In 1414, she succeeded her brother Ladislaus to the throne of Naples; at that date she was 41 years old and was already the widow of her cousin Hedwig
Jadwiga of Poland
Jadwiga was monarch of Poland from 1384 to her death. Her official title was 'king' rather than 'queen', reflecting that she was a sovereign in her own right and not merely a royal consort. She was a member of the Capetian House of Anjou, the daughter of King Louis I of Hungary and Elizabeth of...
's rejected fiancé, William, Duke of Austria
William, Duke of Austria
William the Courteous was a member and head of the Leopoldinian Line, ruler of Carinthia, Styria and Carniola.Born in Vienna, he was the oldest son of Duke Leopold the Just and his wife, Viridis Visconti, and ruled in Carinthia, Styria and Carniola.His engagement with Hedwig of Hungary, youngest...
. Her reign was marked by her quarrel with Pope Martin V
Pope Martin V
Pope Martin V , born Odo Colonna, was Pope from 1417 to 1431. His election effectively ended the Western Schism .-Biography:...
and the power in the court of her numerous favourites and lovers, the first being Pandolfello Alopo. Although Joan married twice, she did not have any children.

Joan married her first husband, William, Duke of Austria in Vienna
Vienna
Vienna is the capital and largest city of the Republic of Austria and one of the nine states of Austria. Vienna is Austria's primary city, with a population of about 1.723 million , and is by far the largest city in Austria, as well as its cultural, economic, and political centre...
in the autumn of 1401 when she was 28 years of age. He had been rejected as a husband by her cousin, Hedwig of Poland. Joan did not have any children by William, who died in 1406 after five years of marriage. It was sometime after his death, that she acquired a lover by the name of Pandolfello Alopo, whom she appointed Grand Chamberlain. Alopo was the first in what would become a series of lovers and male favourites. He later caused the downfall of the influential condottiero Muzio Sforza
Muzio Sforza
Muzio Attendolo Sforza was an Italian condottiero. Founder of the Sforza dynasty, he led a Bolognese-Florentine army at the Battle of Casalecchio.He was the father of Francesco Sforza, who ruled Milan for 16 years....
, who held the important office of Gran Connestabile which had provoked the jealousy of Joan's favourite. In early 1415, she became affianced to John of Aragon
John II of Aragon
John II the Faithless, also known as the Great was the King of Aragon from 1458 until 1479, and jure uxoris King of Navarre from 1425 until his death. He was the son of Ferdinand I and his wife Eleanor of Alburquerque...
, a son of King Ferdinand I of Aragon
Ferdinand I of Aragon
Ferdinand I called of Antequera and also the Just or the Honest) was king of Aragon, Valencia, Majorca, Sardinia and Corsica and king of Sicily, duke of Athens and Neopatria, and count of Barcelona, Roussillon and Cerdanya...
, and 25 years her junior. The betrothal was shortly afterwards annulled, which left Joan free to choose another husband.

On 10 August 1415, she married a second time, to James of Bourbon, Count of La Marche
James II, Count of La Marche
James II of Bourbon-La Marche was the son of John I, Count of La Marche and Catherine of Vendôme.-Early life:...
, in order to gain the support of the French monarchy. The marriage contract stipulated that upon his marriage to Joan he would be granted the title of Prince of Taranto. Not having received the promised title, James had Alopo killed and forced Joan to name him King of Naples. In an attempt to assume complete power, he imprisoned Joan in her own apartments in the royal palace; however, she was later released by the nobles. His behaviour earned him the hate of the Neapolitan barons and the populace. In 1416, a riot exploded in Naples against James, and he was compelled to send back his French administrators and to renounce his title. In this period, Joan began her relationship with Giovanni Caracciolo
Giovanni Caracciolo
Giovanni Caracciolo, often called Sergianni was an Italian nobleman of the Kingdom of Naples, prime minister and favorite of queen Joan II of Naples....
, better known as Sergianni, who later acquired an almost total power over the court. On 28 August 1417, she reconquered Rome, and the following year in 1418, James left Naples for France.


Rupture with the papacy

With James now powerless, Joan could finally celebrate her coronation on 28 October 1419, when she was crowned Queen of Sicily and Naples. However, her relationship with Naples' nominal feudal suzerain, Pope Martin V
Pope Martin V
Pope Martin V , born Odo Colonna, was Pope from 1417 to 1431. His election effectively ended the Western Schism .-Biography:...
, soon worsened. On advice from Caracciolo, she denied Martin economic aid to rebuild the papal army. In response, the Pope called in Louis III of Anjou, son of the rival of King Ladislaus and himself still a pretender to the Neapolitan throne.

In 1420, Louis invaded Campania
Campania
Campania is a region in southern Italy. The region has a population of around 5.8 million people, making it the second-most-populous region of Italy; its total area of 13,590 km² makes it the most densely populated region in the country...
, but the Pope, trying to gain personal advantage from the menace posed to Joan, called the ambassadors of the two parties to Florence
Florence
Florence is the capital city of the Italian region of Tuscany and of the province of Florence. It is the most populous city in Tuscany, with approximately 370,000 inhabitants, expanding to over 1.5 million in the metropolitan area....
. However, Joan rejected the ambiguous papal proposal and called on the help of the brother of her erstwhile betrothed, the powerful King Alfonso V of Aragon
Alfonso V of Aragon
Alfonso the Magnanimous KG was the King of Aragon , Valencia , Majorca, Sardinia and Corsica , and Sicily and Count of Barcelona from 1416 and King of Naples from 1442 until his death...
, whom she promised the hereditary title to Naples. Alfonso entered Naples in July 1421.

Louis lost the support of the Pope, but at the same time the relationship between Joan and Alfonso suddenly worsened. In May 1423, Alfonso had Caracciolo arrested and besieged Joan's residence, the Castel Capuano
Castel Capuano
Castel Capuano is a castle in Naples, southern Italy. It takes its name from the fact that it was at that point in the city walls where the road led out to the city of Capua...
. An agreement was obtained; Sergianni was freed and fled to Aversa
Aversa
Aversa is a town and comune in the Province of Caserta in Campania southern Italy, about 15 kilometres north of Naples. It is the centre of an agricultural district, the agro aversano, producing wine and cheese...
with Joan. Here she met again with Louis, declared her adoption of Alfonso to be null and void, and named Louis as her new heir. Alfonso had to return in Spain, and she could easily return to Naples in April 1424.

The remaining years of Joan's reign were peaceful. Louis dwelled in his fief, the Duchy of Calabria, waiting for the call to the throne. He died in 1434. The aging Joan named René
René I of Naples
René of Anjou , also known as René I of Naples and Good King René , was Duke of Anjou, Count of Provence , Count of Piedmont, Duke of Bar , Duke of Lorraine , King of Naples , titular King of Jerusalem...
, Louis' brother, her heir.

Joan died in Naples on 2 February 1435 at the age of 61, and was buried in the Church of Santa Annunziata. With her death the line of Anjou-Durazzo, and the whole senior Angevin
Capetian House of Anjou
The Capetian House of Anjou, also known as the House of Anjou-Sicily and House of Anjou-Naples, was a royal house and cadet branch of the direct House of Capet. Founded by Charles I of Sicily, a son of Louis VIII of France, the Capetian king first ruled the Kingdom of Sicily during the 13th century...
line of Naples itself became extinct.