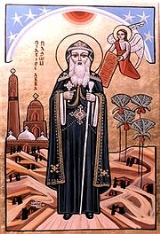 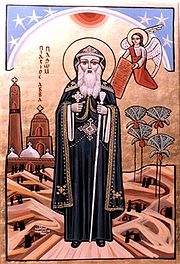 Cenobitic monasticism is a monastic
Monastery
Monastery denotes the building, or complex of buildings, that houses a room reserved for prayer as well as the domestic quarters and workplace of monastics, whether monks or nuns, and whether living in community or alone .Monasteries may vary greatly in size – a small dwelling accommodating only...
tradition that stresses community life. Often in the West, the community belongs to a religious order
Religious order
A religious order is a lineage of communities and organizations of people who live in some way set apart from society in accordance with their specific religious devotion, usually characterized by the principles of its founder's religious practice. The order is composed of initiates and, in some...
and the life of the cenobitic monk is regulated by a religious rule
Rule
Rule, ruler, ruling usually refers to standards for activities. They may refer to:- Human activity :* Business rule, a rule pertaining to the structure or behavior internal to an organization* Game rules, rules that define how a game is played...
, a collection of precepts. The older style of monasticism, to live as a hermit, is called eremitic; and a third form of monasticism, found primarily in the East, is the skete
Skete
A Skete is a monastic style community that allows relative isolation for monks, but alsoallows for communal services and the safety of shared resources and protection...
.

The English words "cenobite" and "cenobitic" are derived, via Latin
Latin
Latin is an Italic language originally spoken in Latium and Ancient Rome. It, along with most European languages, is a descendant of the ancient Proto-Indo-European language. Although it is considered a dead language, a number of scholars and members of the Christian clergy speak it fluently, and...
, from the Greek
Greek language
Greek is an independent branch of the Indo-European family of languages. Native to the southern Balkans, it has the longest documented history of any Indo-European language, spanning 34 centuries of written records. Its writing system has been the Greek alphabet for the majority of its history;...
words koinos (κοινός), "common", and bios (βίος), "life". The adjective can also be cenobiac (κοινοβιακός, koinobiakos). A group of monks living in community is often referred to as a "cenobium".

Cenobitic monasticism exists in various religions, though Buddhist and Christian
Christian
A Christian is a person who adheres to Christianity, an Abrahamic, monotheistic religion based on the life and teachings of Jesus of Nazareth as recorded in the Canonical gospels and the letters of the New Testament...
cenobitic monasticism are the most prominent.

The organized version of Christian cenobitic monasticism is commonly thought to have started in Egypt
Egypt
Egypt , officially the Arab Republic of Egypt, Arabic: , is a country mainly in North Africa, with the Sinai Peninsula forming a land bridge in Southwest Asia. Egypt is thus a transcontinental country, and a major power in Africa, the Mediterranean Basin, the Middle East and the Muslim world...
in the 4th century AD. Christian monks of previous centuries were usually hermit
Hermit
A hermit is a person who lives, to some degree, in seclusion from society.In Christianity, the term was originally applied to a Christian who lives the eremitic life out of a religious conviction, namely the Desert Theology of the Old Testament .In the...
s, especially in the Middle East
Middle East
The Middle East is a region that encompasses Western Asia and Northern Africa. It is often used as a synonym for Near East, in opposition to Far East...
; this continued to be very common until the decline of Aramean Christianity in the Late Middle Ages
Late Middle Ages
The Late Middle Ages was the period of European history generally comprising the 14th to the 16th century . The Late Middle Ages followed the High Middle Ages and preceded the onset of the early modern era ....
. This form of solitary living, however, did not suit everyone. Some monks found the eremitic style to be too lonely and difficult; and if one was not spiritually prepared, the life could lead to mental breakdowns.

For this reason, organized monastic communities started to be created, so that monks could have more support in their spiritual struggle. While eremitic monks did have an element of socializing, since they would meet once a week to pray together, cenobitic monks came together for common prayer on a more regular basis. The cenobitic monks also practised more socializing because the monasteries where they lived were often located in or near inhabited villages. For example, the Bohairic version of the Life of Pachomius states that the monks of the monastery of Tabenna
Tabenna
Tabenna is considered the first cenobitic monastery. It was a community founded by Pachomius on an island of the Nile in Upper Egypt....
built a church for the villagers of the nearby town of the same name even "before they constructed one for themselves." This means that cenobitic monks did find themselves in contact with other people, including lay people, whereas the eremitic monks tried their best to keep to themselves, only meeting for prayer occasionally.

Cenobitic monks were also different from their eremitic predecessors and counterparts in their actual living arrangements. Whereas the eremitic monks ("hermits") lived alone in a monastery
Monastery
Monastery denotes the building, or complex of buildings, that houses a room reserved for prayer as well as the domestic quarters and workplace of monastics, whether monks or nuns, and whether living in community or alone .Monasteries may vary greatly in size – a small dwelling accommodating only...
consisting of merely a hut or cave ("cell"), the cenobitic monks ("cenobites") lived together in monasteries comprising one or a complex of several buildings. In the case of the latter, each dwelling would house about twenty monks and within the house there were separate rooms or "cells" that would be inhabited by two or three monks. This structure of living for the cenobitic monks has been attributed to the same man that is usually hailed as the "father of cenobitic monasticism," St. Pachomius
Pachomius
Saint Pakhom , also known as Pachome and Pakhomius , is generally recognized as the founder of Christian cenobitic monasticism. In the Coptic churches his feast day is celebrated on May 9...
. Pachomius is thought to have got the idea for living quarters like these from the time he spent in the Roman army, because the style is very "reminiscent of army barracks."

Though he was not the first to implement communal monasticism, Pachomius is still an important part of cenobitic monastic history, since he was the first to bring separate monasteries together into a more organized structure. This is the reason why (as well as the fact that much hagiography and literature has been written about him) he has continued to be recognized as the father of the tradition. 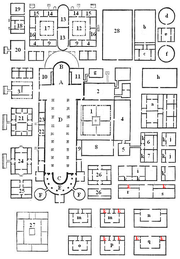 Aside from the monasteries that joined Pachomius' federation of cenobitic monasteries, there were also other cenobitic Christian groups who decided not to join him. The Melitians and the Manichaeans are examples of these cenobitic groups.

Even before Pachomius had started on his path toward monastic communities, the Melitians were a group already recruiting members.
The Melitians were a heretical Christian sect founded by Meletius of Lycopolis
Meletius of Lycopolis
Meletius was bishop of Lycopolis in Egypt. He is known to us mainly as the founder and namesake of the Melitians , one of several scismatic sects in early church history which were concerned about the ease with which lapsed Christians reentered the Church. See also DonatismThe details of his life...
They actually had "heard of Pachomius' monastic aspirations and tried to recruit him" to join their community.

As for Manichaeans, members of a religion founded by a man named Mani
Mani (prophet)
Mani , of Iranian origin was the prophet and the founder of Manichaeism, a gnostic religion of Late Antiquity which was once widespread but is now extinct...
, some scholars believe they were the "pioneers of communal asceticism in Egypt," and not Pachomius and the Pachomians as has become the common thought. Mani, himself, was actually influenced to begin cenobitic monasticism from other groups, including Buddhists and Jewish-Christian Elkasites who were practising this tradition already.

The overall idea of cenobitic monasticism cannot be traced to a single source, however, as many have tried to do in calling Pachomius the "founder" of the tradition, but rather is thanks to the ideas and work of numerous groups, including the aforementioned Melitians, Manichaeans, Elkasites, Buddhists and, of course, the Pachomians.

The cenobitic monastic idea did not end with these early groups, though, but rather inspired future groups and individuals:

In both the East and the West, cenobiticism established itself as the primary form of monasticism, with many foundations being richly endowed by rulers and nobles. The excessive acquisition of wealth and property led to several attempts at reform, such as Bernard of Clairvaux
Bernard of Clairvaux
Bernard of Clairvaux, O.Cist was a French abbot and the primary builder of the reforming Cistercian order.After the death of his mother, Bernard sought admission into the Cistercian order. Three years later, he was sent to found a new abbey at an isolated clearing in a glen known as the Val...
in the West and Nilus of Sora
Nil Sorsky
Nil Sorsky was a leader of the Russian medieval movement opposing ecclesiastic landownership . Nil Sorsky is venerated as a saint in the Russian Orthodox Church. His feast day is on the anniversary of his repose on May 7.-Early life:Before becoming a monk, Nil Sorsky worked as a scribe and was...
in the East.