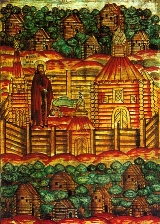 Encyclopedia
Nil Sorsky (c.
Circa
Circa , usually abbreviated c. or ca. , means "approximately" in the English language, usually referring to a date...
1433–1508) was a leader of the Russia
Russia
Russia or , officially known as both Russia and the Russian Federation , is a country in northern Eurasia. It is a federal semi-presidential republic, comprising 83 federal subjects...
n medieval movement opposing ecclesiastic landownership (known as the "Non-possessors
Non-possessors
Non-possessors belonged to a 16th-century movement in the Russian Orthodox Church in opposition to ecclesiastical land-ownership...
"). Nil Sorsky is venerated as a saint in the Russian Orthodox Church
Russian Orthodox Church
The Russian Orthodox Church or, alternatively, the Moscow Patriarchate The ROC is often said to be the largest of the Eastern Orthodox churches in the world; including all the autocephalous churches under its umbrella, its adherents number over 150 million worldwide—about half of the 300 million...
. His feast day is on the anniversary of his repose on May 7.

Before becoming a monk
Monk
A monk is a person who practices religious asceticism, living either alone or with any number of monks, while always maintaining some degree of physical separation from those not sharing the same purpose...
, Nil Sorsky worked as a scribe
Scribe
A scribe is a person who writes books or documents by hand as a profession and helps the city keep track of its records. The profession, previously found in all literate cultures in some form, lost most of its importance and status with the advent of printing...
and was engaged in book copying. Later in his life, he took monastic vows at the Kirillo-Belozersky Monastery
Kirillo-Belozersky Monastery
Kirillo-Belozersky Monastery , loosely translated in English as the St. Cyril-Belozersk Monastery, used to be the largest monastery of Northern Russia. The monastery was dedicated to the Feast of the Dormition of the Theotokos, for which cause it was sometimes referred to as the Dormition Monastery...
, which had been known for its hostile stance towards monastic landownership. The founder of the monastery
Monastery
Monastery denotes the building, or complex of buildings, that houses a room reserved for prayer as well as the domestic quarters and workplace of monastics, whether monks or nuns, and whether living in community or alone .Monasteries may vary greatly in size – a small dwelling accommodating only...
– Saint Kirill of Beloozero
Kirill of Beloozero
Cyril of White Lake was a monk and saint of the Russian Orthodox Church who lived in the 15th century. Saint Cyril was a disciple of Saint Sergius of Radonezh...
– was himself known for rejecting villages that had been offered to him by devout nobles.

Kirill’s followers adopted his ways and would later become known as the startsy
Starets
A starets is an elder of a Russian Orthodox monastery who functions as venerated adviser and teacher. Elders or spiritual fathers are charismatic spiritual leaders whose wisdom stems from God as obtained from ascetic experience...
from out the Volga with Nil Sorsky as their leader. Soon, he went on a journey to the Holy Land
Holy Land
The Holy Land is a term which in Judaism refers to the Kingdom of Israel as defined in the Tanakh. For Jews, the Land's identifiction of being Holy is defined in Judaism by its differentiation from other lands by virtue of the practice of Judaism often possible only in the Land of Israel...
and visited Palestine
Palestine
Palestine is a conventional name, among others, used to describe the geographic region between the Mediterranean Sea and the Jordan River, and various adjoining lands....
, Constantinople
Constantinople
Constantinople was the capital of the Roman, Eastern Roman, Byzantine, Latin, and Ottoman Empires. Throughout most of the Middle Ages, Constantinople was Europe's largest and wealthiest city.-Names:...
, and Mount Athos
Mount Athos
Mount Athos is a mountain and peninsula in Macedonia, Greece. A World Heritage Site, it is home to 20 Eastern Orthodox monasteries and forms a self-governed monastic state within the sovereignty of the Hellenic Republic. Spiritually, Mount Athos comes under the direct jurisdiction of the...
, acquainting himself with a mystical doctrine of Hesychasm
Hesychasm
Hesychasm is an eremitic tradition of prayer in the Eastern Orthodox Church, and some of the Eastern Catholic Churches, such as the Byzantine Rite, practised by the Hesychast Hesychasm is an eremitic tradition of prayer in the Eastern Orthodox Church, and some of the Eastern Catholic Churches,...
and reading patristic literature
Patristics
Patristics or Patrology is the study of Early Christian writers, known as the Church Fathers. The names derive from the Latin pater . The period is generally considered to run from the end of New Testament times or end of the Apostolic Age Patristics or Patrology is the study of Early Christian...
. Upon his return to Russia
Russia
Russia or , officially known as both Russia and the Russian Federation , is a country in northern Eurasia. It is a federal semi-presidential republic, comprising 83 federal subjects...
(between 1473 and 1489), Nil Sorsky founded a cloister
Cloister
A cloister is a rectangular open space surrounded by covered walks or open galleries, with open arcades on the inner side, running along the walls of buildings and forming a quadrangle or garth...
on the Sora River (hence, Nil Sorsky, or Nil of Sora) not far from the Kirillo-Belozersky Monastery, where he would settle down with his followers. He wrote extensively.

Nil Sorsky was involved in the Novgorod heresy
Heresy
Heresy is a controversial or novel change to a system of beliefs, especially a religion, that conflicts with established dogma. It is distinct from apostasy, which is the formal denunciation of one's religion, principles or cause, and blasphemy, which is irreverence toward religion...
affair (see Sect of Skhariya the Jew
Sect of Skhariya the Jew
The Sect of Skhariya the Jew, much more commonly known as the Heresy of the Judaizers or Zhidovstvuyushchiye, was a sect that appeared in Novgorod the Great and Grand Duchy of Moscow in the second half of the 15th century and marked the beginning of a new era of heresy in Russia...
for details), which had stirred a lot of minds in Russia at that time. It appears that Sorsky and his closest associate Paisiy Yaroslavov
Paisiy Yaroslavov
Paisiy Yaroslavov was the most famous monk of the Kamenny Monastery, located on the Lake Kubenskoye in Vologda Oblast, Russia.Historians do not know much about Paisiy Yaroslavov. He appears to have been a prominent figure during the reign of Ivan III. In 1478-1482, he was an hegumen at the...
were much more tolerant towards the heretics than most of the Russian clergy
Clergy
Clergy is the generic term used to describe the formal religious leadership within a given religion. A clergyman, churchman or cleric is a member of the clergy, especially one who is a priest, preacher, pastor, or other religious professional....
, led by Gennady (Archbishop of Novgorod)
Gennady (Archbishop of Novgorod)
Gennady was Archbishop of Novgorod the Great and Pskov from 1484 to 1504. He was most instrumental in fighting the Heresy of the Judaizers and is famous for compiling the first complete codex of the Bible in Slavic in 1499, known as the Gennady Bible. Gennady is a saint of the Russian Orthodox...
and Joseph Volotsky
Joseph Volotsky
Joseph Volotsky — also known as Joseph of Volotsk or Joseph of Volokolamsk ; secular name Ivan Sanin — was a prominent caesaropapist ideologist of the Russian Orthodox Church who led the party defending monastic landownership.He is a saint ; his memory is celebrated on 9 September and 18...
.

In 1489, Archbishop Gennady embarked on the path of fighting the heretics and asked Archbishop of Rostov
Rostov
Rostov is a town in Yaroslavl Oblast, Russia, one of the oldest in the country and a tourist center of the Golden Ring. It is located on the shores of Lake Nero, northeast of Moscow. Population:...
to consult with the elders Nil Sorsky and Paisiy Yaroslavov (who had been living in his eparchy
Eparchy
Eparchy is an anglicized Greek word , authentically Latinized as eparchia and loosely translating as 'rule over something,' like province, prefecture, or territory, to have the jurisdiction over, it has specific meanings both in politics, history and in the hierarchy of the Eastern Christian...
) and seek their assistance in this matter. Historical accounts of that period do not shed any light on the outcome of these "negotiations", but from that time on there seems to have been no interaction between Sorsky and Yaroslavov on one side and Gennady and Joseph Volotsky on the other.

The two elders, however, did not treat heresy with indifference. They were both present at the Synod of 1490, which dealt with heresy, and exerted their influence upon its final decision. Initially, the clergy unanimously spoke in support of burning all the heretics at the stake. At the conclusion of the synod, however, only a few priests were condemned and then defrocked without being executed. Later in the decade, however, several heretics were burned in both Novgorod and Moscow.

Nil Sorsky’s teachings differed from standard Russian Orthodoxy
Russian Orthodox Church
The Russian Orthodox Church or, alternatively, the Moscow Patriarchate The ROC is often said to be the largest of the Eastern Orthodox churches in the world; including all the autocephalous churches under its umbrella, its adherents number over 150 million worldwide—about half of the 300 million...
. In his teachings, he developed mystical and ascetical ideas along the lines of Gregory Sinaite
Gregory of Sinai
Saint Gregory of Sinai was instrumental in the emergence of "technical" Hesychasm on Athos in the early 14th century....
's hesychasm, asking the believers to concentrate on their inner world and personal emotional experiences of faith as means for achieving unity with God
God
God is the English name given to a singular being in theistic and deistic religions who is either the sole deity in monotheism, or a single deity in polytheism....
. Nil Sorsky demanded that monks participate in productive labor and spoke in support of monastic reforms on a basis of a secluded and modest lifestyle.

Nil Sorsky dedicated his efforts towards fighting against monastic landownership rights at the Synod of 1503 in Moscow
Moscow
Moscow is the capital, the most populous city, and the most populous federal subject of Russia. The city is a major political, economic, cultural, scientific, religious, financial, educational, and transportation centre of Russia and the continent...
. There, he raised a question about monastic estates, which comprised about one third of the territory of the whole Russian state at that time and which, in his view, had been responsible for demoralization of the Russian monastic communities. Nil Sorsky was supported by the elders of the Kirillo-Belozersky Monastery and his disciple Vassian Patrikeyev
Vassian Patrikeyev
Vassian Patrikeyev, also known as Vassian Kosoy was a Russian ecclesiastic and political figure and writer...
. Although he spoke in favor of Ivan III
Ivan III of Russia
Ivan III Vasilyevich , also known as Ivan the Great, was a Grand Prince of Moscow and "Grand Prince of all Rus"...
’s policy of secularization
Secularization
Secularization is the transformation of a society from close identification with religious values and institutions toward non-religious values and secular institutions...
of monastic lands, Sorsky did not live long enough to see the end of this struggle. Patrikeyev and Artemius of the Trinity
Troitse-Sergiyeva Lavra
The Trinity Lavra of St. Sergius is the most important Russian monastery and the spiritual centre of the Russian Orthodox Church. The monastery is situated in the town of Sergiyev Posad, about 70 km to the north-east from Moscow by the road leading to Yaroslavl, and currently is home to...
were Nil Sorsky’s successors.