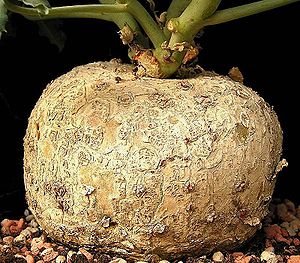 A caudex is a form of stem
Plant stem
A stem is one of two main structural axes of a vascular plant. The stem is normally divided into nodes and internodes, the nodes hold buds which grow into one or more leaves, inflorescence , conifer cones, roots, other stems etc. The internodes distance one node from another...
morphology
Morphology (biology)
In biology, morphology is a branch of bioscience dealing with the study of the form and structure of organisms and their specific structural features....
appearing as a thickened, short, perennial stem that is either underground or near ground level (frequently wood
Wood
Wood is a hard, fibrous tissue found in many trees. It has been used for hundreds of thousands of years for both fuel and as a construction material. It is an organic material, a natural composite of cellulose fibers embedded in a matrix of lignin which resists compression...
y, and non-photosynthetic
Photosynthesis
Photosynthesis is a chemical process that converts carbon dioxide into organic compounds, especially sugars, using the energy from sunlight. Photosynthesis occurs in plants, algae, and many species of bacteria, but not in archaea. Photosynthetic organisms are called photoautotrophs, since they can...
). It may be swollen for the purpose of water storage, especially in xerophyte
Xerophyte
A xerophyte or xerophytic organism is a plant which has adapted to survive in an environment that lacks water, such as a desert. Xerophytic plants may have adapted shapes and forms or internal functions that reduce their water loss or store water during long periods of dryness...
s. Elongate branches may arise from the caudex, or the leaves may be more or less sessile to the caudex.

Caudiciform
Caudiciform
Caudiciform plants, or fat plants, are water-retaining plants adapted to arid climate or soil conditions. Caudiciform plants store water in their stem bases, stems and/or roots. Many species of plant from different plant families have developed this form of storing water rather than in foliage or...
describes plants having a caudex. Some notable caudiciformic genera: Adenia
Adenia
Adenia is a genus in the passionflower family Passifloraceae. It is named after Aden, a city in Yemen.The genus includes a number of tropical and subtropical xerophytes; many of which form substantially thickened bases or lianas. It is also a Caudiciform. Many species are characterised by the...
(family Passifloraceae
Passifloraceae
Passifloraceae is a family of flowering plants, containing about 530 species classified in around 18 genera. They include trees, shrubs, lianas and climbing plants, and are mostly found in tropical regions....
), Beaucarnea
Beaucarnea
Beaucarnea is a genus of four species of flowering plant native to Mexico, Belize, and Guatemala. In the APG III classification system, it is placed in the family Asparagaceae, subfamily Nolinoideae...
(family Ruscaceae
Ruscaceae
Nolinoideae is a monocot subfamily of the family Asparagaceae in the APG III system of 2009. It was previously treated as a separate family, Ruscaceae s.l...
), Hydnophytum
Hydnophytum
Hydnophytum is a genus of epiphytic myrmecophytes native to Southeast Asia, the Pacific region and also extending into Queensland in northern Australia. The name is derived from the Ancient Greek hydnon "tuber", and phyton "plant", after their appearance with their swollen succulent stems. The...
(family Rubiaceae
Rubiaceae
The Rubiaceae is a family of flowering plants, variously called the coffee family, madder family, or bedstraw family. The group contains many commonly known plants, including the economically important coffee , quinine , and gambier , and the horticulturally valuable madder , west indian jasmine ,...
), Jatropha
Jatropha
Jatropha is a genus of approximately 175 succulent plants, shrubs and trees , from the family Euphorbiaceae. The name is derived from the Greek words ἰατρός , meaning "physician," and τροφή , meaning "nutrition," hence the common name physic nut. Mature plants produce separate male and female...
(family Euphorbiaceae
Euphorbiaceae
Euphorbiaceae, the Spurge family are a large family of flowering plants with 300 genera and around 7,500 species. Most are herbs, but some, especially in the tropics, are also shrubs or trees. Some are succulent and resemble cacti....
), Pachyrhizus
Pachyrhizus
Pachyrhizus is a small genus of five or six species of tropical and subtropical plants growing from large, often edible taproots.- Jícama :...
(family Fabaceae
Fabaceae
The Fabaceae or Leguminosae, commonly known as the legume, pea, or bean family, is a large and economically important family of flowering plants. The group is the third largest land plant family, behind only the Orchidaceae and Asteraceae, with 730 genera and over 19,400 species...
), and Adenium
Adenium
Adenium is a genus of flowering plants in the dogbane family, Apocynaceae.-Cultivation and uses:Adenium obesum is grown as a houseplant in temperate regions. Numerous hybrids have been developed. Adeniums are appreciated for their colorful flowers, but also for their unusual, thick caudexes...
(family Apocynaceae
Apocynaceae
The Apocynaceae or dogbane family is a family of flowering plants that includes trees, shrubs, herbs, and lianas.Many species are tall trees found in tropical rainforests, and most are from the tropics and subtropics, but some grow in tropical dry, xeric environments. There are also perennial herbs...
).