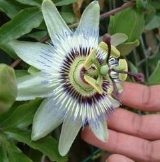 Overview
Passifloraceae is a family
Family (biology)
In biological classification, family is* a taxonomic rank. Other well-known ranks are life, domain, kingdom, phylum, class, order, genus, and species, with family fitting between order and genus. As for the other well-known ranks, there is the option of an immediately lower rank, indicated by the...
of flowering plants, containing about 530 species classified in around 18 genera. They include tree
Tree
A tree is a perennial woody plant. It is most often defined as a woody plant that has many secondary branches supported clear of the ground on a single main stem or trunk with clear apical dominance. A minimum height specification at maturity is cited by some authors, varying from 3 m to...
s, shrub
Shrub
A shrub or bush is distinguished from a tree by its multiple stems and shorter height, usually under 5–6 m tall. A large number of plants may become either shrubs or trees, depending on the growing conditions they experience...
s, liana
Liana
A liana is any of various long-stemmed, woody vines that are rooted in the soil at ground level and use trees, as well as other means of vertical support, to climb up to the canopy to get access to well-lit areas of the forest. Lianas are especially characteristic of tropical moist deciduous...
s and climbing plants, and are mostly found in tropical regions.

The former Cronquist system
Cronquist system
The Cronquist system is a taxonomic classification system of flowering plants. It was developed by Arthur Cronquist in his texts An Integrated System of Classification of Flowering Plants and The Evolution and Classification of Flowering Plants .Cronquist's system places flowering plants into two...
of classification placed this family in the order Violales
Violales
Violales is a botanical name of an order of flowering plants and takes its name from the included family Violaceae. The name has been used in several systems, although some systems used the name Parietales for similar groupings...
, but under more modern classifications systems such as that proposed by the Angiosperm Phylogeny Group
Angiosperm Phylogeny Group
The Angiosperm Phylogeny Group, or APG, refers to an informal international group of systematic botanists who came together to try to establish a consensus on the taxonomy of flowering plants that would reflect new knowledge about plant relationships discovered through phylogenetic studies., three...
, this is absorbed into the Malpighiales
Malpighiales
Malpighiales is one of the largest orders of flowering plants, containing about 16000 species, approximately 7.8% of the eudicots. The order is very diverse and hard to recognize except with molecular phylogenetic evidence. It is not part of any of the classification systems that are based only on...
.

Can you please tell me something about charactersitics ,genera, spieces, habitat, discription and its mode of nutrition
More
x