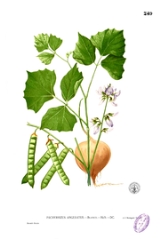 Encyclopedia
Pachyrhizus is a small genus of five or six species of tropical and subtropical plants growing from large, often edible taproot
Taproot
A taproot is an enlarged, somewhat straight to tapering plant root that grows vertically downward. It forms a center from which other roots sprout laterally.Plants with taproots are difficult to transplant...
s.

The jícama (ˈhɪkəmə) or yam bean (P. erosus) is a vine widely grown for its large (10-15 cm diameter and up to 20 kg weight), spherical or elongated taproot. After removal of the thick, fibrous brown skin, the white flesh of the root can be eaten cooked or raw. Crisp, moist, and slightly sweet, the flesh draws comparison with that of the apple
Apple
The apple is the pomaceous fruit of the apple tree, species Malus domestica in the rose family . It is one of the most widely cultivated tree fruits, and the most widely known of the many members of genus Malus that are used by humans. Apple grow on small, deciduous trees that blossom in the spring...
. The plant produces seeds that are comparable to lima bean
Lima bean
Phaseolus lunatus is a legume. It is grown for its seed, which is eaten as a vegetable. It is commonly known as the lima bean or butter bean.-Origin and uses:...
s, and that are sometimes eaten when young in places where the jicama is native. The mature seeds contain high levels of The remainder of the jícama plant is very poison
Poison
In the context of biology, poisons are substances that can cause disturbances to organisms, usually by chemical reaction or other activity on the molecular scale, when a sufficient quantity is absorbed by an organism....
ous.

Goiteño, nupe, jacatupe or Amazonian yam bean (Pachyrhizus tuberosus) is an annual vine that is characterized by a wrapped and herbaceous stem and a ligneous base. It has white and lilac flowers, pods from 10 to 20 cm in length and beans with a high protein content (32%). Each plant has two or more tubercles from 15 to 25 cm in length that are succulent, sweet and rich in starch and protein (9%). They are consumed both raw and cooked. The leaves (20 to 24% protein) and pods are also edible. This plant prospers in acid soils in South America
South America
South America is a continent situated in the Western Hemisphere, mostly in the Southern Hemisphere, with a relatively small portion in the Northern Hemisphere. The continent is also considered a subcontinent of the Americas. It is bordered on the west by the Pacific Ocean and on the north and east...
's tropical rainforests. It is cultivated by the native peoples of the Amazonia
Amazon Rainforest
The Amazon Rainforest , also known in English as Amazonia or the Amazon Jungle, is a moist broadleaf forest that covers most of the Amazon Basin of South America...
, who practice shifting horticulture.

The ahipa or ajipa or Andean yam bean (Pachyrhizus ahipa) is very similar to the jicama and goitenyo in characteristics and uses. Unlike the jícama, it is not a vine and it grows up 2000 meters in the highest Bolivia
Bolivia
Bolivia officially known as Plurinational State of Bolivia , is a landlocked country in central South America. It is the poorest country in South America...
n mountains. The root is smaller and more elongated. It is little known outside of the Andes
Andes
The Andes is the world's longest continental mountain range. It is a continual range of highlands along the western coast of South America. This range is about long, about to wide , and of an average height of about .Along its length, the Andes is split into several ranges, which are separated...
, where it is mostly grown for personal or local consumption. In the nineteenth century, British scientists introduced ahipa to the West Indies, where it is also enjoyed by the residents of those islands (Vietmeyer 1992).
The source of this article is wikipedia, the free encyclopedia.  The text of this article is licensed under the GFDL.