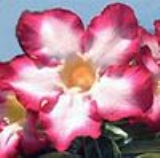 Overview
Adenium is a genus
Genus
In biology, a genus is a low-level taxonomic rank used in the biological classification of living and fossil organisms, which is an example of definition by genus and differentia...
of flowering plant
Flowering plant
The flowering plants , also known as Angiospermae or Magnoliophyta, are the most diverse group of land plants. Angiosperms are seed-producing plants like the gymnosperms and can be distinguished from the gymnosperms by a series of synapomorphies...
s in the dogbane
Apocynum
Apocynum, commonly known as Dogbane and Indian Hemp, is a genus of the plant family of the Apocynaceae with seven species. From the Greek: apo, away; cyno, dog, attributed to its toxicity...
family, Apocynaceae
Apocynaceae
The Apocynaceae or dogbane family is a family of flowering plants that includes trees, shrubs, herbs, and lianas.Many species are tall trees found in tropical rainforests, and most are from the tropics and subtropics, but some grow in tropical dry, xeric environments. There are also perennial herbs...
.
Adenium obesum
Adenium obesum
Adenium obesum is a species of flowering plant in the dogbane family, Apocynaceae, that is native to the Sahel regions, south of the Sahara , and tropical and subtropical eastern and southern Africa and Arabia...
is grown as a houseplant
Houseplant
A houseplant is a plant that is grown indoors in places such as residences and offices. Houseplants are commonly grown for decorative purposes, positive psychological effects, or health reasons such as indoor air purification...
in temperate regions. Numerous hybrids have been developed. Adeniums are appreciated for their colorful flowers, but also for their unusual, thick caudexes
Caudex
A caudex is a form of stem morphology appearing as a thickened, short, perennial stem that is either underground or near ground level . It may be swollen for the purpose of water storage, especially in xerophytes...
. They can be grown for many years in a pot and are commonly used for bonsai
Bonsai
is a Japanese art form using miniature trees grown in containers. Similar practices exist in other cultures, including the Chinese tradition of penjing from which the art originated, and the miniature living landscapes of Vietnamese hòn non bộ...
.

Because seed-grown plants are not genetically identical to the mother plant, desirable varieties are commonly propagated by grafting
Grafting
Grafting is a horticultural technique whereby tissues from one plant are inserted into those of another so that the two sets of vascular tissues may join together. This vascular joining is called inosculation...
.

Does adenium cultivation has a great market in future?