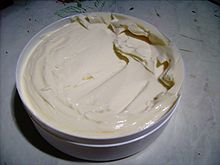 Catupiry is one of the most popular "requeijão
Requeijão
Requeijão is a milk-derived product, produced in Portugal and Brazil. It is sometimes called Requesón .It is a loose, ricotta-like cheese used to make cheese spreads. A mild, unsalty ricotta can be substituted. This variety is most often sold in the markets wrapped in fresh corn husks...
" (creamy cheese) brands in Brazil
Brazil
Brazil , officially the Federative Republic of Brazil , is the largest country in South America. It is the world's fifth largest country, both by geographical area and by population with over 192 million people...
. It was developed by the Italian
Italy
Italy , officially the Italian Republic languages]] under the European Charter for Regional or Minority Languages. In each of these, Italy's official name is as follows:;;;;;;;;), is a unitary parliamentary republic in South-Central Europe. To the north it borders France, Switzerland, Austria and...
immigrant Mario Silvestrini in the state of Minas Gerais
Minas Gerais
Minas Gerais is one of the 26 states of Brazil, of which it is the second most populous, the third richest, and the fourth largest in area. Minas Gerais is the Brazilian state with the largest number of Presidents of Brazil, the current one, Dilma Rousseff, being one of them. The capital is the...
in 1911. The name derives from the native Tupi word meaning "excellent".

Catupiry is a soft, mild-tasting cheese that can be spread over toast and crackers or used in cooking. Because of its low level of acidity, Catupiry has become an ingredient in various dishes.

The expression "com Catupiry" (with Catupiry) refers to foods where catupiry is an ingredient, or a filling, such as pizza, coxinha
Coxinha
The Coxinha is a popular Brazilian snack, also popular in Portugal. It is made from shredded chicken and spices , enclosed in wheat flour—variants made from potato or manioc are also common--batter, and deep fried...
s or Pão de queijo
Cheese bun
Cheese buns, or cheese breads are a variety of small, baked, cheese-flavored rolls, a popular typical snack and breakfast food in Brazil, and also in nearby regions of Bolivia, Paraguay and northern Argentina...
. It is also eaten as a dessert combined with guava
Guava
Guavas are plants in the myrtle family genus Psidium , which contains about 100 species of tropical shrubs and small trees. They are native to Mexico, Central America, and northern South America...
jam.

In the United States, catupiry can be found in Brazilian stores and restaurants in the states of New Jersey
New Jersey
New Jersey is a state in the Northeastern and Middle Atlantic regions of the United States. , its population was 8,791,894. It is bordered on the north and east by the state of New York, on the southeast and south by the Atlantic Ocean, on the west by Pennsylvania and on the southwest by Delaware...
, Florida
Florida
Florida is a state in the southeastern United States, located on the nation's Atlantic and Gulf coasts. It is bordered to the west by the Gulf of Mexico, to the north by Alabama and Georgia and to the east by the Atlantic Ocean. With a population of 18,801,310 as measured by the 2010 census, it...
, Georgia
Georgia (U.S. state)
Georgia is a state located in the southeastern United States. It was established in 1732, the last of the original Thirteen Colonies. The state is named after King George II of Great Britain. Georgia was the fourth state to ratify the United States Constitution, on January 2, 1788...
, California
California
California is a state located on the West Coast of the United States. It is by far the most populous U.S. state, and the third-largest by land area...
, New York
New York
New York is a state in the Northeastern region of the United States. It is the nation's third most populous state. New York is bordered by New Jersey and Pennsylvania to the south, and by Connecticut, Massachusetts and Vermont to the east...
, Illinois
Illinois
Illinois is the fifth-most populous state of the United States of America, and is often noted for being a microcosm of the entire country. With Chicago in the northeast, small industrial cities and great agricultural productivity in central and northern Illinois, and natural resources like coal,...
and Massachusetts
Massachusetts
The Commonwealth of Massachusetts is a state in the New England region of the northeastern United States of America. It is bordered by Rhode Island and Connecticut to the south, New York to the west, and Vermont and New Hampshire to the north; at its east lies the Atlantic Ocean. As of the 2010...
.
The source of this article is wikipedia, the free encyclopedia.  The text of this article is licensed under the GFDL.