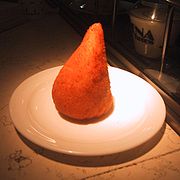 The Coxinha is a popular Brazilian snack
Cuisine of Brazil
Brazilian cuisine, like Brazil itself, varies greatly by region. The natural crops available in each region add to their singularity.Brazilian cooking, while it has many similarities with that of its South American neighbors, is distinct...
, also popular in Portugal
Portugal
Portugal , officially the Portuguese Republic is a country situated in southwestern Europe on the Iberian Peninsula. Portugal is the westernmost country of Europe, and is bordered by the Atlantic Ocean to the West and South and by Spain to the North and East. The Atlantic archipelagos of the...
. It is made from shredded chicken
Chicken (food)
Chicken is the most common type of poultry in the world, and is prepared as food in a wide variety of ways, varying by region and culture.- History :...
and spices (occasionally including Catupiry
Catupiry
Catupiry is one of the most popular "requeijão" brands in Brazil. It was developed by the Italian immigrant Mario Silvestrini in the state of Minas Gerais in 1911. The name derives from the native Tupi word meaning "excellent"....
-style cheese), enclosed in wheat flour—variants made from potato
Potato
The potato is a starchy, tuberous crop from the perennial Solanum tuberosum of the Solanaceae family . The word potato may refer to the plant itself as well as the edible tuber. In the region of the Andes, there are some other closely related cultivated potato species...
or manioc are also common--batter
Batter (cooking)
Batter is a semi-liquid mixture of one or more flours combined with liquids such as water, milk or eggs used to prepare various foods. Often a leavening agent such as baking powder is included to aerate and fluff up the batter as it cooks, or the mixture may be naturally fermented for this purpose...
, and deep fried
Deep frying
Deep frying is a cooking method in which food is submerged in hot oil or fat. This is normally performed with a deep fryer or chip pan; industrially, a pressure fryer or vacuum fryer may be used....
. It is shaped to roughly resemble a chicken drumstick, and sometimes a toothpick is inserted where the bone would be.

Coxinhas were originally made with a chicken thigh, thus the origin of its traditional shape. The batter used to make the dough is often prepared with the broth of the chicken, enhancing the flavor of the dough.

Coxinha literally means "little thigh", and it is how chicken drumsticks are known in Brazil.

Different variations of the original are becoming more prevalent today - for example the Coxinha Mineira, filled with corn and seasoning, named so because corn is more commonly eaten in the state of Minas Gerais.

The Coxa Creme is the originator of the coxinha. It is an actual chicken drumstick, enclosed in batter and deep fried.