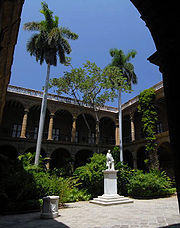 The Palacio de los Capitanes Generales is the former official residence of the governors
Colonial heads of Cuba
List of Colonial Heads of CubaDates in italics indicate de facto continuation of office.For continuation after independence see List of Presidents of Cuba...
(Captains General) of Havana
Havana
Havana is the capital city, province, major port, and leading commercial centre of Cuba. The city proper has a population of 2.1 million inhabitants, and it spans a total of — making it the largest city in the Caribbean region, and the most populous...
, Cuba
Cuba
The Republic of Cuba is an island nation in the Caribbean. The nation of Cuba consists of the main island of Cuba, the Isla de la Juventud, and several archipelagos. Havana is the largest city in Cuba and the country's capital. Santiago de Cuba is the second largest city...
. Located on the eastern side of the Plaza de Armas
Plaza de Armas
The Plaza de Armas is the name for the main square in many Latin American cities. In Mexico this space is known as El Zócalo, and in Central America as Parque Central...
in Old Havana
Old Havana
Old Havana contains the core of the original city of Havana. The positions of the original Havana city walls are the modern boundaries of Old Havana....
it is home to the Museum of the City of Havana (Museo de la Ciudad). It houses exhibitions of art and historical artefacts and many of the rooms are preserved with their original Colonial decoration.

The plan for the building was put forward to the city council on 28 January 1773 by the governor Felipe de Fondesviela y Ondeano, marqués de la Torre. He proposed that the Parroquial Mayor church be demolished, the square be redesigned in keeping with the grandeur of the developing city and the Palacio de los Capitanes Generales constructed on the eastern side of the square in imitation of Royal Post Office (which would later become the Palacio del Segundo Cabo, the residence of the vice-governors) which had been constructed on the northern side of the square alongside the Castillo de la Real Fuerza
Castillo de la Real Fuerza
The Castillo de la Real Fuerza is a fortress on the western side of the harbour in Havana, Cuba, set back from the entrance, and bordering the Plaza de Armas. Originally built to defend against attack by pirates, it suffered from a poor strategic position too far inside the bay...
. Construction from the designs of the Cuban engineer and architect, Antonio Fernández de Trebejos y Zaldívar, who had already been responsible for the much-admired post office, commenced in 1776. Much of the material used in the construction was imported to ensure it was of the finest quality: the bricks from Málaga
Málaga
Málaga is a city and a municipality in the Autonomous Community of Andalusia, Spain. With a population of 568,507 in 2010, it is the second most populous city of Andalusia and the sixth largest in Spain. This is the southernmost large city in Europe...
, wrought-iron grilles from Bilbao
Bilbao
Bilbao ) is a Spanish municipality, capital of the province of Biscay, in the autonomous community of the Basque Country. With a population of 353,187 , it is the largest city of its autonomous community and the tenth largest in Spain...
and marble from Genoa
Genoa
Genoa |Ligurian]] Zena ; Latin and, archaically, English Genua) is a city and an important seaport in northern Italy, the capital of the Province of Genoa and of the region of Liguria....
, but the building work was carried out by slaves and progressed so slowly that the new governor (the sixth since de Fondesviela), Luís de las Casas y Arragorri, was not able to occupy the building until 1791, and work was not completed until 1792. The building originally housed the governor's residence and a prison, as well as being used as the meeting place for the city council, as the original council offices in Plaza San Francisco had been badly damaged by a hurricane in 1768. The prison, located in the west wing, was closed in 1834.

The last of the Colonial governors vacated the palace in 1898 when Cuba gained independence
History of Cuba
The known history of Cuba, the largest of the Caribbean islands, predates Christopher Columbus' sighting of the island during his first voyage of discovery on 27 October 1492...
under the terms of the Treaty of Paris
Treaty of Paris (1898)
The Treaty of Paris of 1898 was signed on December 10, 1898, at the end of the Spanish-American War, and came into effect on April 11, 1899, when the ratifications were exchanged....
, and it was used by the US military governors from 1899 until 1902. It was used as the presidential palace of the Cuban Republic from 1902 until 1920, when the president relocated to the building which now houses the Museum of the Revolution
Museum of the Revolution
The Museum of the Revolution is a museum located in the Old Havana section of Havana, Cuba. The museum is housed in what was the Presidential Palace of all Cuban presidents from Mario García Menocal to Fulgencio Batista...
and the Palacio de los Capitanes Generales became once again the offices of the city council. The municipal authorities moved elsewhere in 1967 and in 1968 the palace became the City Museum.

The building is in the Cuban Baroque
Baroque
The Baroque is a period and the style that used exaggerated motion and clear, easily interpreted detail to produce drama, tension, exuberance, and grandeur in sculpture, painting, literature, dance, and music...
style. It is a thick-walled square building, little altered from the time of its original construction. The front of the building has an arcade
Arcade (architecture)
An arcade is a succession of arches, each counterthrusting the next, supported by columns or piers or a covered walk enclosed by a line of such arches on one or both sides. In warmer or wet climates, exterior arcades provide shelter for pedestrians....
with arches supported by columns and a pavement made from china pelona. Above the arcade the first storey has a limestone
Limestone
Limestone is a sedimentary rock composed largely of the minerals calcite and aragonite, which are different crystal forms of calcium carbonate . Many limestones are composed from skeletal fragments of marine organisms such as coral or foraminifera....
façade
Facade
A facade or façade is generally one exterior side of a building, usually, but not always, the front. The word comes from the French language, literally meaning "frontage" or "face"....
created from local limestone, notable for the numerous marine fossil
Fossil
Fossils are the preserved remains or traces of animals , plants, and other organisms from the remote past...
s embedded in the stone. Small balconies extend out from the full length stained-glass windows, level with the top of the columns below. In the centre of the building is an open leafy courtyard overlooked by a gallery on all four sides.

The ground floor and mezzanine contain artwork and artefacts from Havana's past. "La Giradilla", a statue that became symbol of the city, and was originally located on the tower of the nearby Castillo de la Real Fuerza, stands at the foot of the stairs leading to the mezzanine. The Cenotaph, the oldest colonial monument in Cuba, taken from the original Parroquial Mayor church, is on display in one of the rooms on the lower floor, and another room houses relics from the Espada Cemetery
Espada Cemetery
The Espada Cemetery is a disused cemetery located approximately a mile west of the city of Havana, Cuba, near to the coast and close to the San Lázaro Leper Hospital...
, including the tomb of the French artist Jean Baptiste Vermay. The Espada Cemetery was the first cemetery in the city, founded by Juan José Diaz de Espada in 1806. Also on display are some of the original stone baths in the shape of a nautilus
Nautilus
Nautilus is the common name of marine creatures of cephalopod family Nautilidae, the sole extant family of the superfamily Nautilaceae and of its smaller but near equal suborder, Nautilina. It comprises six living species in two genera, the type of which is the genus Nautilus...
shell and a 19th-century fire engine manufactured in London.

On the top floor the rooms of the governor's residence are preserved with much of the original furniture and decoration. The Hall of Heroic Cuba contains important objects from the wars of independence and many flags of national significance including the flag of Carlos Manuel de Céspedes
Carlos Manuel de Céspedes
Carlos Manuel de Céspedes del Castillo was a Cuban planter who freed his slaves and made the declaration of Cuban independence in 1868 which started the Ten Years' War...
, the "Father of the Homeland" (Padre de la Patria). The building also houses the Office of the City Historian, headed by Eusebio Leal
Eusebio Leal
Eusebio Leal Spengler, , is the Havana City Historian, director of the restoration program of Old Havana and its historical center, UNESCO World Heritage Site, Deputy to the National Assembly of the Popular Power in the IV, V and I SAW Legislature, Ambassador of Good Will of the United Nations,...
, which is responsible for the renovation work in Old Havana.
The source of this article is wikipedia, the free encyclopedia.  The text of this article is licensed under the GFDL.