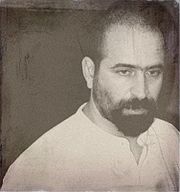 Turovsky was born in Kiev
Kiev
Kiev or Kyiv is the capital and the largest city of Ukraine, located in the north central part of the country on the Dnieper River. The population as of the 2001 census was 2,611,300. However, higher numbers have been cited in the press....
, Ukraine in 1961, when it was part of the Soviet Union
Soviet Union
The Soviet Union , officially the Union of Soviet Socialist Republics , was a constitutionally socialist state that existed in Eurasia between 1922 and 1991....
. He studied art from an early age under his father, the painter Mikhail Turovsky
Mikhail Turovsky
Mikhail Turovsky is an American artist-painter, and writer-aphorist, resident in New York since 1979.-Early life and education:Mikhail Turovsky was born in 1933 in Kiev. During the Second World War, he was evacuated to Samarkand with his mother and an older brother...
and at the Shevchenko State Art School
Shevchenko State Art School
Taras Shevshenko State Art School is a high school specializing in arts , in Kiev, Ukraine. There are many notable personalities among its graduates.It was incorporated on August 12, 1937....
in Kiev. He also began to be interested in music in his teens. The family emigrated to New York City in 1979. They first lived in the Bronx. Turovsky continued his art studies in New York at the Parsons School of Design, studying concurrently Historical Performance (Baroque Lute
Lute
Lute can refer generally to any plucked string instrument with a neck and a deep round back, or more specifically to an instrument from the family of European lutes....
) and Composition, under Patrick O'Brien, Pier Luigi Cimma
Pier Luigi Cimma
Pierluigi Cimma or Pier Luigi Cimma , was an Italian composer, lutenist, guitarist and teacher.Cimma was born in Turin. He was the longtime chairman of the guitar department at the Conservatorio G.Verdi in Turin, and the founder of the Bardonecchia Guitar Festival...
, Leonid Hrabovsky and Davide Zannoni
Davide Zannoni
Davide Zannoni is a composer of contemporary Classical music. He began his career playing drums in jazz clubs and later symphonic percussion with the Maggio Musicale Fiorentino Orchestra in Florence, Italy. He also pursued academic studies and earned a doctoral degree in Humanities from the...
.

During the early 1990s, he worked at NYANA, a refugee resettlement agency in New York City (his co-workers there included people now prominent in the arts: theatre director Alexander Gelman
Alexander Gelman
For the writer Alexander Gelman, see Alexander Isaakovich Gelman. Alexander Gelman , born: Aleksandr Simonovich Gelman is an American theater director and the current Producing Artistic Director of Organic Theater Company in Chicago, Illinois.-Early life:Alexander Gelman was born in Leningrad,...
, writer and director Todd Solondz
Todd Solondz
Todd Solondz is an American independent film screenwriter and director known for his style of dark, thought-provoking, socially conscious satire. Solondz has been critically acclaimed for his examination of the "dark underbelly of middle class American suburbia", a reflection of his own background...
, and writers Alex Halberstadt
Alex Halberstadt
Alex Halberstadt is an American writer, noted in particular for his biography of Doc Pomus.He came to the United States as a child in 1980....
and Gary Shteyngart
Gary Shteyngart
Gary Shteyngart is an American writer born in Leningrad, USSR. Much of his work is satirical and relies on the invention of elaborately fictitious yet somehow familiar places and times.-Life:...
).

Turovsky began composing seriously in the early 1990s, simultaneously embarking on a career as a prolific figurative/representational artist-painter. He participated in many exhibitions. His first one-man show was held in June 2006 in New York. Eight of his paintings are in the permanent collection of the International Marian Institute at the University of Dayton
University of Dayton
The University of Dayton is a private Roman Catholic university operated by the Society of Mary located in Dayton, Ohio...
.

Turovsky worked as a scenic artist in the production of Jim Jarmusch
Jim Jarmusch
James R. "Jim" Jarmusch is an American independent film director, screenwriter, actor, producer, editor and composer. Jarmusch has been a major proponent of independent cinema, particularly during the 1980s and 1990s.-Early life:...
's film "Ghost Dog"., as well as in Tom DiCillo
Tom DiCillo
Thomas A. "Tom" DiCillo is an American film director, screenwriter and cinematographer.-Early life:He was born in Camp Le Jeune, North Carolina. His father was Italian and his mother was from New England...
's "Double Whammy" and other films.

As a performer, Turovsky-Savchuk appeared as a lute
Lute
Lute can refer generally to any plucked string instrument with a neck and a deep round back, or more specifically to an instrument from the family of European lutes....
soloist and continuo
Figured bass
Figured bass, or thoroughbass, is a kind of integer musical notation used to indicate intervals, chords, and non-chord tones, in relation to a bass note...
player in the Early Music
Early music
Early music is generally understood as comprising all music from the earliest times up to the Renaissance. However, today this term has come to include "any music for which a historically appropriate style of performance must be reconstructed on the basis of surviving scores, treatises,...
line-up of Julian Kytasty
Julian Kytasty
Julian Kytasty is a Ukrainian-American composer, singer, kobzar, bandurist, flute player and conductor. He was born January 23 1958 in Detroit, Michigan, in the family of refugees....
's "New York Bandura Ensemble
New York Bandura Ensemble
The New York Bandura Ensemble is a New York based music ensemble currently led by singer and bandurist Julian Kytasty. The ensemble is devoted to various forms and styles of Ukrainian music, from Renaissance and Baroque, through authentic folk, to contemporary and avantgarde music, presenting...
" and "Radio Banduristan". Roman Turovsky is a recipient of the 2008 NYSCA grant for the purpose of study of kobzar
Kobzar
A Kobzar was an itinerant Ukrainian bard who sang to his own accompaniment.-Tradition:Kobzars were often blind, and became predominantly so by the 1800s...
art with Julian Kytasty.

Roman Turovsky-Savchuk is a founding member of Vox Saeculorum
Vox Saeculorum
Vox Sæculorum is an international society of contemporary composers writing in the Baroque style established in 2006. Vox Sæculorum was the primary focus of a feature length article on period baroque composition written by Grant Colburn and published in the Summer issue of Early Music America...
and The Delian Society
Delian Society
The Delian Society, conceived by American composer Joseph Dillon Ford, was founded on 23 January 2004 as an international community of composers, performers, scholars, recording engineers, music publishers, and amateurs dedicated to the revitalization of the great tonal traditions in art music...
, two international groups devoted to preservation and perpetuation of tonal music. He was described as composer-extraordinaire by the British author Suhayl Saadi
Suhayl Saadi
Suhayl Saadi is a physician, author and dramatist based in Glasgow, Scotland. His varied literary output includes novels, short stories, anthologies of fiction, song lyrics, plays for stage and radio theatre, and wisdom pieces for The Dawn Patrol, the Sarah Kennedy show on BBC Radio...
.

In 2011 Turovsky-Savchuk contributed the soundtrack to the Iryna Korpan documentary
Documentary
A documentary is a creative work of non-fiction, including:* Documentary film, including television* Radio documentary* Documentary photographyRelated terms include:...
"She Paid The Ultimate Price".

Since 1996 Turovsky has signed his musical works as Sautscheck, a German transliteration
Transliteration
Transliteration is a subset of the science of hermeneutics. It is a form of translation, and is the practice of converting a text from one script into another...
of the second part of his surname as an allonym. Turovsky used a variety of constructions, such as Joachim Peter, Johann Joachim, and Konradin Aemilius, for first names attached to Sautscheck. He represented the works as newly discovered manuscripts by supposed 17th-, 18th- and 19th-century composers from several generations of the same family.

His works for lute achieved wide circulation under the allonym of Sautscheck and the pseudonyms "Ioannes Leopolita" and "Jacobus Olevsiensis". Some musicologists perceived these works as a malicious hoax
Hoax
A hoax is a deliberately fabricated falsehood made to masquerade as truth. It is distinguishable from errors in observation or judgment, or rumors, urban legends, pseudosciences or April Fools' Day events that are passed along in good faith by believers or as jokes.-Definition:The British...
and forgeries due to ostensibly baroque
Baroque
The Baroque is a period and the style that used exaggerated motion and clear, easily interpreted detail to produce drama, tension, exuberance, and grandeur in sculpture, painting, literature, dance, and music...
or earlier styles. The controversy by 2000 over what some considered an outright hoax led to coinage of a new German word, Sautscheckerei, which denoted a musical or literary hoax.

Turovsky published Cantiones sarmaticae et ruthenicae, a collection of nearly 300 Renaissance
Renaissance
The Renaissance was a cultural movement that spanned roughly the 14th to the 17th century, beginning in Italy in the Late Middle Ages and later spreading to the rest of Europe. The term is also used more loosely to refer to the historical era, but since the changes of the Renaissance were not...
-styled pieces based on Ukrainian folk melodies under the pseudonyms "Ioannes Leopolita" and "Jacobus Olevsiensis".

Turovsky's poetry translations (from Russian, Ukrainian
Ukrainian language
Ukrainian is a language of the East Slavic subgroup of the Slavic languages. It is the official state language of Ukraine. Written Ukrainian uses a variant of the Cyrillic alphabet....
, Polish
Polish language
Polish is a language of the Lechitic subgroup of West Slavic languages, used throughout Poland and by Polish minorities in other countries...
and other languages) have appeared in the literary almanac The Germ, and various web publications.

His sister is the poet Genya Turovskaya
Genya Turovskaya
Genya Turovskaya is an American poet, born in Ukraine. Her work has been published in many journals and literary reviews. She received various awards and fellowships, such as a MacDowell Colony Fellowship, a Montana Artist Refuge Fellowship, the Witter Bynner Translation Residency at Santa Fe Art...
. His brother-in-law is the sculptor and stage designer George Tsypin
George Tsypin
George Tsypin is an American sculptor, architect and stage designer .-Early life and education:...
.