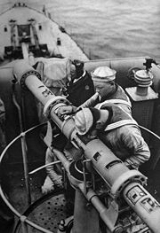 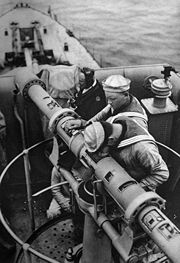 A rangefinder is a device that measures distance from the observer to a target, for the purposes of surveying
Surveying
See Also: Public Land Survey SystemSurveying or land surveying is the technique, profession, and science of accurately determining the terrestrial or three-dimensional position of points and the distances and angles between them...
, determining focus in photography
Photography
Photography is the art, science and practice of creating durable images by recording light or other electromagnetic radiation, either electronically by means of an image sensor or chemically by means of a light-sensitive material such as photographic film...
, or accurately aiming a weapon
Weapon
A weapon, arm, or armament is a tool or instrument used with the aim of causing damage or harm to living beings or artificial structures or systems...
. Some devices use active methods to measure (such as sonar
Sonar
Sonar is a technique that uses sound propagation to navigate, communicate with or detect other vessels...
, laser
Laser
A laser is a device that emits light through a process of optical amplification based on the stimulated emission of photons. The term "laser" originated as an acronym for Light Amplification by Stimulated Emission of Radiation...
, or radar
Radar
Radar is an object-detection system which uses radio waves to determine the range, altitude, direction, or speed of objects. It can be used to detect aircraft, ships, spacecraft, guided missiles, motor vehicles, weather formations, and terrain. The radar dish or antenna transmits pulses of radio...
); others measure distance using trigonometry
Trigonometry
Trigonometry is a branch of mathematics that studies triangles and the relationships between their sides and the angles between these sides. Trigonometry defines the trigonometric functions, which describe those relationships and have applicability to cyclical phenomena, such as waves...
(stadiametric rangefinders and parallax, or coincidence rangefinders
Coincidence rangefinder
A coincidence rangefinder is a type of rangefinder that uses mechanical and optical principles to allow an operator to determine the distance to a visible object....
). These methodologies use a set of known information, usually distances or target sizes, to make the measurement, and have been in regular use since the 18th century.

Rangefinders may be used by military or law enforcement snipers as a means of calculating the distance to the target in order to set up a "perfect shot". The laser rangefinder is not always the best option though, as it sends out a light source that may give away the snipers' position.

A rangefinder camera is a camera fitted with a rangefinder which allows the photographer to measure the distance to the subject and thus take photographs that are in sharp focus.

Rangefinders are also used for surveying in forestry. Special devices with anti-leaf filters are used.