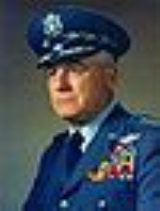 Encyclopedia
A cap badge, also known as head badge or hat badge, is a badge worn on uniform
Uniform
A uniform is a set of standard clothing worn by members of an organization while participating in that organization's activity. Modern uniforms are worn by armed forces and paramilitary organizations such as police, emergency services, security guards, in some workplaces and schools and by inmates...
headgear and distinguishes the wearer's nationality and/or organisation. The wearing of cap badges is a convention commonly found among military and police forces, as well as uniformed civilian groups such as the Boy Scouts
Scouting
Scouting, also known as the Scout Movement, is a worldwide youth movement with the stated aim of supporting young people in their physical, mental and spiritual development, that they may play constructive roles in society....
, civil defence organizations, paramedical units (e.g. the St. John Ambulance
St. John Ambulance
St John Ambulance, branded as St John in some territories, is a common name used by a number of affiliated organisations in different countries dedicated to the teaching and practice of medical first aid and the provision of ambulance services, all of which derive their origins from the St John...
Brigade), customs services, fire services etc.

Cap badges are a modern form of heraldry
Heraldry
Heraldry is the profession, study, or art of creating, granting, and blazoning arms and ruling on questions of rank or protocol, as exercised by an officer of arms. Heraldry comes from Anglo-Norman herald, from the Germanic compound harja-waldaz, "army commander"...
and their design generally incorporates highly symbolic devices. 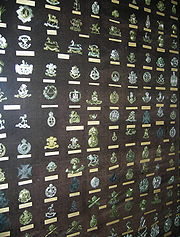 In the British Army
British Army
The British Army is the land warfare branch of Her Majesty's Armed Forces in the United Kingdom. It came into being with the unification of the Kingdom of England and Scotland into the Kingdom of Great Britain in 1707. The new British Army incorporated Regiments that had already existed in England...
(as well as Commonwealth
Commonwealth of Nations
The Commonwealth of Nations, normally referred to as the Commonwealth and formerly known as the British Commonwealth, is an intergovernmental organisation of fifty-four independent member states...
armies) each regiment
Regiment
A regiment is a major tactical military unit, composed of variable numbers of batteries, squadrons or battalions, commanded by a colonel or lieutenant colonel...
and corps
Corps
A corps is either a large formation, or an administrative grouping of troops within an armed force with a common function such as Artillery or Signals representing an arm of service...
has its own cap badge. The cap badge of the QRL is called a motto by those within the regiment that of the Royal Horse Artillery
Royal Horse Artillery
The regiments of the Royal Horse Artillery , dating from 1793, are part of the Royal Regiment of Artillery of the British Army...
is known as a cypher and that of the Coldstream Guards
Coldstream Guards
Her Majesty's Coldstream Regiment of Foot Guards, also known officially as the Coldstream Guards , is a regiment of the British Army, part of the Guards Division or Household Division....
is known as a Capstar. The concept of regimental badges appears to have originated with the British Army. The Encyclopædia Britannica's 1911 Edition notes that although branch badges for infantry, cavalry and so on were common to other armies of the time, only the British Army wore distinctive regimental devices.

Plastic cap badges were usually introduced during a prolonged war (e.g. the Second World War
World War II
World War II, or the Second World War , was a global conflict lasting from 1939 to 1945, involving most of the world's nations—including all of the great powers—eventually forming two opposing military alliances: the Allies and the Axis...
) when metals became strategic materials. Nowadays many cap badges in the British Army are made of a material called "stay-brite" plastic because it is cheap, flexible and does not require as much maintenance as the brass ones.

Regimental cap badges are usually cast as one single piece but in a number of cases they may be cast in different pieces. For instance, the badge of the now amalgamated, The Highlanders (Seaforth, Gordons and Camerons)
The Highlanders (Seaforth, Gordons and Camerons)
The Highlanders, 4th Battalion, Royal Regiment of Scotland is an infantry battalion of the Royal Regiment of Scotland.Prior to 28 March 2006, the Highlanders was an infantry regiment in its own right; The Highlanders , part of the Scottish Division...
was cast in two separate pieces: the Queen's Crown and the thistle forming one piece, and the stag's head and scroll with regimental motto forming a second piece. (see the first picture above) In the Royal Marines, the cap badges of commissioned officers are split into two, the crown and lion atop, but separated from, the globe and laurels.

A regiment or battalion
Battalion
A battalion is a military unit of around 300–1,200 soldiers usually consisting of between two and seven companies and typically commanded by either a Lieutenant Colonel or a Colonel...
may maintain variations of the same cap badge for different ranks. These variations are usually in the badges' material, size and stylization. Variations in cap badges are normally made for:


Some regiments maintain a blackened or subdued version of their cap badges as shiny brass cap badges may attract the enemy's attention on the battlefield. However, since the practice of British soldiers fighting in their berets has all but died out, the wearing of these has become much less common in recent years.

The cap badge is positioned differently depending on the form of headdress:


Soldiers of the Gloucestershire Regiment and subsequently the Royal Gloucestershire, Berkshire and Wiltshire Regiment
Royal Gloucestershire, Berkshire and Wiltshire Regiment
The Royal Gloucestershire, Berkshire and Wiltshire was an infantry regiment of the British Army.It was formed in 1994 by the amalgamation of two English regiments.*The Gloucestershire Regiment...
wore a cap badge on both the front and the rear of their headdress, a tradition maintained by soldiers in The Rifles
The Rifles
The Rifles is the largest regiment of the British Army. Formed in 2007, it consists of five regular and two territorial battalions, plus a number of companies in other TA battalions, Each battalion of the Rifles was formerly an individual battalion of one of the two large regiments of the Light...
when in service dress. The back badge is unique in the British Army and was awarded to the 28th Regiment of Foot for their actions at the Battle of Alexandria
Battle of Alexandria
The Battle of Alexandria or Battle of Canope, fought on March 21, 1801 between the French army under General Menou and the British expeditionary corps under Sir Ralph Abercrombie, took place near the ruins of Nicopolis, on the narrow spit of land between the sea and Lake Abukir, along which the...
in 1801.

Additional items that reflect a regiment's historical accomplishments, such as backing cloth and hackle
Hackle
The hackle is a clipped feather plume that is attached to a military headdress.In the British Army and the armies of some Commonwealth countries the hackle is worn by some infantry regiments, especially those designated as fusilier regiments and those with Scottish and Northern Irish origins. The...
s, may be worn behind the cap badge. In Scottish regiments, for instance, it is a tradition for soldiers to wear their cap badges on a small square piece of their regimental tartan
Tartan
Tartan is a pattern consisting of criss-crossed horizontal and vertical bands in multiple colours. Tartans originated in woven wool, but now they are made in many other materials. Tartan is particularly associated with Scotland. Scottish kilts almost always have tartan patterns...
s. Officer Cadet
Officer Cadet
Officer cadet is a rank held by military and merchant navy cadets during their training to become commissioned officers and merchant navy officers, respectively. The term officer trainee is used interchangeably in some countries...
s may wear a small white backing behind their badges. Members of arms such as the Adjutant General's Corps
Adjutant General's Corps
The Adjutant General's Corps is a corps in the British Army responsible for many of its general administrative services. As of 2002, the AGC had a staff of 7,000 people...
and Royal Electrical and Mechanical Engineers
Royal Electrical and Mechanical Engineers
The Corps of Royal Electrical and Mechanical Engineers is a corps of the British Army that has responsibility for the maintenance, servicing and inspection of almost every electrical and mechanical piece of equipment within the British Army from Challenger II main battle tanks and WAH64 Apache...
serving on attachment to other units often wear that regiment's beret or headdress but with their own Corps capbadge.

For a period leading up to Remembrance Day
Remembrance Day
Remembrance Day is a memorial day observed in Commonwealth countries since the end of World War I to remember the members of their armed forces who have died in the line of duty. This day, or alternative dates, are also recognized as special days for war remembrances in many non-Commonwealth...
artificial poppies are worn by many people in the United Kingdom and Canada
Canada
Canada is a North American country consisting of ten provinces and three territories. Located in the northern part of the continent, it extends from the Atlantic Ocean in the east to the Pacific Ocean in the west, and northward into the Arctic Ocean...
to commemorate those killed in war. When worn in uniform the plastic stem of the poppy is discarded and the paper petals are fitted behind the beret badge where a metal cap badge is worn. On forage caps the paper petals are fitted under the left hand chin strap button.

Cap badges used by navies (and merchant mariners) around the world tend to follow the pattern in use by the British Royal Navy
Royal Navy
The Royal Navy is the naval warfare service branch of the British Armed Forces. Founded in the 16th century, it is the oldest service branch and is known as the Senior Service...
: an anchor
Anchor
An anchor is a device, normally made of metal, that is used to connect a vessel to the bed of a body of water to prevent the vessel from drifting due to wind or current. The word derives from Latin ancora, which itself comes from the Greek ἄγκυρα .Anchors can either be temporary or permanent...
, or occasionally a cockade
Cockade
A cockade is a knot of ribbons, or other circular- or oval-shaped symbol of distinctive colors which is usually worn on a hat.-Eighteenth century:...
, surrounded by golden leaf-shaped embroidery, and often topped by a crown or another symbol. For petty officer
Petty Officer
A petty officer is a non-commissioned officer in many navies and is given the NATO rank denotion OR-6. They are equal in rank to sergeant, British Army and Royal Air Force. A Petty Officer is superior in rank to Leading Rate and subordinate to Chief Petty Officer, in the case of the British Armed...
s the leaves may be absent or replaced by a ring of golden cable. The main exception to this is the United States Navy
United States Navy
The United States Navy is the naval warfare service branch of the United States Armed Forces and one of the seven uniformed services of the United States. The U.S. Navy is the largest in the world; its battle fleet tonnage is greater than that of the next 13 largest navies combined. The U.S...
, which once followed this pattern, but changed after the Civil War to the current designs, with crossed anchors behind the eagle and shield for commissioned officers.