Encyclopedia
The Republic of Buryatia is a federal subject
Federal subjects of Russia
Russia is a federation which, since March 1, 2008, consists of 83 federal subjects . In 1993, when the Constitution was adopted, there were 89 federal subjects listed...
of Russia
Russia
Russia or , officially known as both Russia and the Russian Federation , is a country in northern Eurasia. It is a federal semi-presidential republic, comprising 83 federal subjects...
(a republic
Republics of Russia
The Russian Federation is divided into 83 federal subjects , 21 of which are republics. The republics represent areas of non-Russian ethnicity. The indigenous ethnic group of a republic that gives it its name is referred to as the "titular nationality"...
). Its capital
Capital City
Capital City was a television show produced by Euston Films which focused on the lives of investment bankers in London living and working on the corporate trading floor for the fictional international bank Shane-Longman....
is the city of Ulan-Ude
Ulan-Ude
Ulan-Ude is the capital city of the Republic of Buryatia, Russia, located about southeast of Lake Baikal on the Uda River at its confluence with the Selenga...
. Its area is 351300 square kilometres (135,637.7 sq mi) with a population of 972,658 (preliminary 2010 Census results). 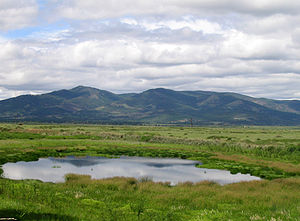 The republic is located in the south-central region of Siberia
Siberia
Siberia is an extensive region constituting almost all of Northern Asia. Comprising the central and eastern portion of the Russian Federation, it was part of the Soviet Union from its beginning, as its predecessor states, the Tsardom of Russia and the Russian Empire, conquered it during the 16th...
along the eastern shore of Lake Baikal
Lake Baikal
Lake Baikal is the world's oldest at 30 million years old and deepest lake with an average depth of 744.4 metres.Located in the south of the Russian region of Siberia, between Irkutsk Oblast to the northwest and the Buryat Republic to the southeast, it is the most voluminous freshwater lake in the...
.

Over 80% of the republic's territory is located in the mountainous region, including the Baikal Mountains
Baikal Mountains
thumb|right|300px|The mountains and lake in the summer, as seen from [[Bolshiye Koty]] on the southwest shoreThe Baikal Mountains or Baikal Range rise steeply over the northwestern shore of Lake Baikal in southern Siberia, Russia...
on the northern shores of Lake Baikal
Lake Baikal
Lake Baikal is the world's oldest at 30 million years old and deepest lake with an average depth of 744.4 metres.Located in the south of the Russian region of Siberia, between Irkutsk Oblast to the northwest and the Buryat Republic to the southeast, it is the most voluminous freshwater lake in the...
.

The republic's natural resources include gold
Gold
Gold is a chemical element with the symbol Au and an atomic number of 79. Gold is a dense, soft, shiny, malleable and ductile metal. Pure gold has a bright yellow color and luster traditionally considered attractive, which it maintains without oxidizing in air or water. Chemically, gold is a...
, tungsten
Tungsten
Tungsten , also known as wolfram , is a chemical element with the chemical symbol W and atomic number 74.A hard, rare metal under standard conditions when uncombined, tungsten is found naturally on Earth only in chemical compounds. It was identified as a new element in 1781, and first isolated as...
, zinc
Zinc
Zinc , or spelter , is a metallic chemical element; it has the symbol Zn and atomic number 30. It is the first element in group 12 of the periodic table. Zinc is, in some respects, chemically similar to magnesium, because its ion is of similar size and its only common oxidation state is +2...
, uranium
Uranium
Uranium is a silvery-white metallic chemical element in the actinide series of the periodic table, with atomic number 92. It is assigned the chemical symbol U. A uranium atom has 92 protons and 92 electrons, of which 6 are valence electrons...
, and more.

According to the 2002 Census
Russian Census (2002)
Russian Census of 2002 was the first census of the Russian Federation carried out on October 9 through October 16, 2002. It was carried out by the Russian Federal Service of State Statistics .-Resident population:...
, ethnic Russians
Russians
The Russian people are an East Slavic ethnic group native to Russia, speaking the Russian language and primarily living in Russia and neighboring countries....
make up two thirds of the republic's population, while the ethnic Buryats
Buryats
The Buryats or Buriyads , numbering approximately 436,000, are the largest ethnic minority group in Siberia and are mainly concentrated in their homeland, the Buryat Republic, a federal subject of Russia...
are only 27.8%. Other groups include Ukrainians
Ukrainians
Ukrainians are an East Slavic ethnic group native to Ukraine, which is the sixth-largest nation in Europe. The Constitution of Ukraine applies the term 'Ukrainians' to all its citizens...
(1.0%), Tatars
Tatars
Tatars are a Turkic speaking ethnic group , numbering roughly 7 million.The majority of Tatars live in the Russian Federation, with a population of around 5.5 million, about 2 million of which in the republic of Tatarstan.Significant minority populations are found in Uzbekistan, Kazakhstan,...
(0.8%), and a host of smaller groups, each accounting for less than 0.5% of the total population.

The area of the present-day Buryatia was first colonized in the 17th century by Russians in search of wealth, furs, and gold. In 1923, the Buryat-Mongolian Autonomous Soviet Socialist Republic was created as a result of the merger of Buryat-Mongol and Mongol-Buryat Oblasts. In 1937, Aga Buryatia and Ust-Orda Buryatia were detached from the Buryat-Mongolian ASSR and merged with Chita
Chita Oblast
Chita Oblast was a federal subject of Russia in southeast Siberia, Russia. Its administrative center was the city of Chita. It had extensive international borders with China and Mongolia and internal borders with Irkutsk and Amur Oblasts, as well as with the Buryat and the Sakha Republics. Its...
and Irkutsk Oblast
Irkutsk Oblast
Irkutsk Oblast is a federal subject of Russia , located in southeastern Siberia in the basins of Angara River, Lena, and Nizhnyaya Tunguska Rivers. The administrative center is the city of Irkutsk. Population: -History:...
s, respectively. Besides, Olkhonsky District
Olkhonsky District
Olkhonsky District is an administrative district , one of the 33 in Irkutsk Oblast, Russia....
was transferred from the Buryat-Mongolina ASSR to Irkutsk Oblast. 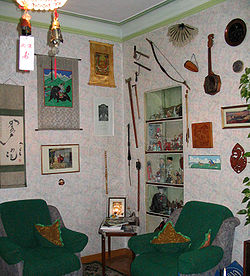 The head of the government is the President, who is appointed by the President of Russia for a four-year term. Between 1991-2007, the President was Leonid Vasilyevich Potapov
Leonid Potapov
Leonid Vasilyevich Potapov was the President of the Buryat Republic in Russia from August 1991 to July 2007. He was reelected three times ; in 2002 he received 68% of the vote....
, who was elected on July 1, 1994, re-elected in 1998 (with 63.25% of votes), and then re-elected again on June 23, 2002 (with over 67% of votes). Prior to the elections, Potapov was the Chairman of the Supreme Soviet of the Republic—the highest post at that time.

The Republic's parliament
Parliament
A parliament is a legislature, especially in those countries whose system of government is based on the Westminster system modeled after that of the United Kingdom. The name is derived from the French , the action of parler : a parlement is a discussion. The term came to mean a meeting at which...
is the People's Khural, popularly elected every four years. The People's Khural has 65 deputies. Alexander Lubsanov is the current Chairman of the People's Khural since 2002.

The Republic's Constitution was adopted on February 22, 1994.

The republic's economy is composed of important agricultural and commercial products including wheat, vegetables, potatoes, timber, leather, graphite, and textiles. Fishing, hunting, fur farming
Fur farming
Fur farming is the practice of breeding or raising certain types of animals for their fur.Fur used from wild caught animals is not farmed, and is instead known as 'free range fur' because the animals have lived their lives free and natural in the wild....
, sheep and cattle farming, mining
Mining
Mining is the extraction of valuable minerals or other geological materials from the earth, from an ore body, vein or seam. The term also includes the removal of soil. Materials recovered by mining include base metals, precious metals, iron, uranium, coal, diamonds, limestone, oil shale, rock...
, stock raising, engineering, and food processing are also important economic generators. 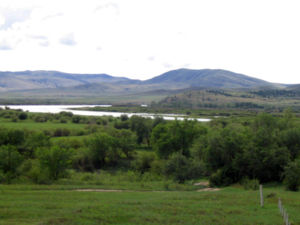 Tibetan Buddhism
Tibetan Buddhism
Tibetan Buddhism is the body of Buddhist religious doctrine and institutions characteristic of Tibet and certain regions of the Himalayas, including northern Nepal, Bhutan, and India . It is the state religion of Bhutan...
, Shamanism
Shamanism
Shamanism is an anthropological term referencing a range of beliefs and practices regarding communication with the spiritual world. To quote Eliade: "A first definition of this complex phenomenon, and perhaps the least hazardous, will be: shamanism = technique of ecstasy." Shamanism encompasses the...
, and Orthodox Christianity
Eastern Orthodox Church
The Orthodox Church, officially called the Orthodox Catholic Church and commonly referred to as the Eastern Orthodox Church, is the second largest Christian denomination in the world, with an estimated 300 million adherents mainly in the countries of Belarus, Bulgaria, Cyprus, Georgia, Greece,...
are the most widespread religions in the republic.