Encyclopedia
The Bugatti Type 57 and later variants (including the famous Atlantic and Atalante) was an entirely new design by Jean Bugatti
Jean Bugatti
Jean Bugatti was an French/Italian automotive designer and test engineer.Born Gianoberto Maria Carlo Bugatti in Cologne, Germany, he was the eldest son of Ettore Bugatti. Soon after his birth the family moved to the village of Dorlisheim near Molsheim in Alsace where his father built the new...
, son of founder Ettore
Ettore Bugatti
right|thumb|Ettore Bugatti in 1932Ettore Arco Isidoro Bugatti was an Italian-born and French naturalized citizen automobile designer and manufacturer....
. Type 57s were built from 1934 through 1940, with a total of 710 examples produced.

Most Type 57s used a twin-cam 3257 cc engine based on that of the Type 49
Bugatti Type 49
The early Bugatti 8-cylinder line began with the 1922 Type 30. The same basic design was used for the 1926 Type 38 as well as the Type 40, Type 43, Type 44, and Type 49.-Type 30:...
but heavily modified by Jean Bugatti. Unlike the chain-drive twin-cam engines of the Type 50
Bugatti Type 46
The Bugatti Type 46 and later Type 50 were large enclosed touring cars and along with the Type 50B racing version, were all produced in the 1930s...
and 51
Bugatti Type 51
The Type 51 series succeeded the famous Type 35 as Bugatti's premier racing car for the 1930s. Unlike the dominant Type 35s of the prior decade, the Type 51 were unable to compete with the government-supported German and Italian offerings.-Type 51:The original Type 51 bowed in 1931...
, the 57's engine used gears to transmit power from the crankshaft.

There were two basic variants of the Type 57 car:

The original Type 57 was a touring car model produced from 1934 through 1940. It used the 3.3 L (3257 cc; 198 cu in) engine from the Type 59 Grand Prix
Grand Prix motor racing
Grand Prix motor racing has its roots in organised automobile racing that began in France as far back as 1894. It quickly evolved from a simple road race from one town to the next, to endurance tests for car and driver...
cars, producing 135 hp (100 kW). Top speed was 95 mi/h.

The original road-going Type 57 included a smaller version of the Royale
Bugatti Royale
The Bugatti Type 41, better known as the Royale, was a large luxury car with a 4.3 m wheelbase and 6.4 m overall length. It weighed approximately 3175 kg and used a 12.7 L straight-8 engine...
's square-bottom horseshoe grille. The sides of the engine compartment were covered with thermostatically-controlled shutters. It was a tall car, contrary to the tastes of the time.

A Type 57C racing car was built from 1937 through 1940, with nearly 750 possibly produced. It shared the 3.3 L engine from the road-going Type 57 but produced 160 hp (119 kW) with a Roots-type supercharger
Supercharger
A supercharger is an air compressor used for forced induction of an internal combustion engine.The greater mass flow-rate provides more oxygen to support combustion than would be available in a naturally aspirated engine, which allows more fuel to be burned and more work to be done per cycle,...
fitted.

The Type 57S/SC is one of the best-known Bugatti cars. The "S" stood for "surbaissé" ("lowered"), though most felt it stood for "sport". It included a v-shaped dip at the bottom of the radiator and mesh grilles on either side of the engine compartment.


Just two supercharged Type 57SC cars were built new, but most 57S owners wanted the additional power afforded by the blower. Therefore, most of the original Type 57S cars returned to Molsheim for the installation of a supercharger, pushing output from 175 hp (130 kW) to 200 hp (150 kW) and 120 mi/h. The Type 57SC {#57374} is also the most expensive car ever purchased at auction, when an anonymous bidder spent an estimated 30 million dollars. That car is in the Oxnard, CA museum called Mullin Automotive Museum. 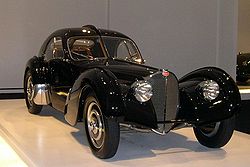 Considered by some to be the most beautiful pre-war car, the Atlantic body Type 57S featured flowing coupe lines with a pronounced dorsal seam running front to back. It was based on the "Aérolithe" concept car
Concept car
A concept vehicle or show vehicle is a car made to showcase new styling and or new technology. They are often shown at motor shows to gauge customer reaction to new and radical designs which may or may not have a chance of being produced....
of 1935. Like the Type 59 Grand Prix car, the Aérolithe used Elektron
Elektron (alloy)
Elektron was a magnesium alloy developed in Germany during the First World War between 1914-18 as a substitute for aluminium alloy. Elektron is unusually light and has a specific gravity of about 1.8 compared with the 2.8 of aluminium alloy. Elektron was used to make incendiary bombs: the B-1E...
(a magnesium alloy
Magnesium alloy
Magnesium alloys are mixtures of magnesium with other metals , often aluminium, zinc, manganese, silicon, copper, rare earths and zirconium. Magnesium is the lightest structural metal. Magnesium alloys have a hexagonal lattice structure, which affects the fundamental properties of these alloys...
) or Duralumin
Duralumin
Duralumin is the trade name of one of the earliest types of age-hardenable aluminium alloys. The main alloying constituents are copper, manganese, and magnesium. A commonly used modern equivalent of this alloy type is AA2024, which contains 4.4% copper, 1.5% magnesium, 0.6% manganese and 93.5%...
(an aluminium alloy
Aluminium alloy
Aluminium alloys are alloys in which aluminium is the predominant metal. The typical alloying elements are copper, magnesium, manganese, silicon and zinc. There are two principal classifications, namely casting alloys and wrought alloys, both of which are further subdivided into the categories...
) for its body panels. Therefore, the body panels were riveted externally, creating the signature seam.

The production Atlantics (just four were made) used plain aluminium, however. But the dorsal seams were retained for style, and have led to the car's present fame.

Only two of the cars survive. One is in the collection of Ralph Lauren
Ralph Lauren
Ralph Lauren is an American fashion designer and business executive; best known for his Polo Ralph Lauren clothing brand.-Early life:...
, the second was owned by Dr. Peter Williamson, and won the 2003 Pebble Beach Concours d'Elegance
Pebble Beach Concours d'Elegance
The Pebble Beach Concours d'Elegance is an automotive charitable event held each year on the Pebble Beach Golf Links in Pebble Beach, California, considered the most prestigious event of its kind. It is the finale of a week long festival of classic cars events in the Monterey area every year...
. Williamson's car (#57374) was sold for between $30 and $40 million at an auction in May 2010 to the Mullin Automotive Museum located in Oxnard, California
Oxnard, California
Oxnard is the 113th largest city in the United States, 19th largest city in California and largest city in Ventura County, California, by way of population. It is located at the western edge of the fertile Oxnard Plain, and is an important agricultural center, with its distinction as the...
.

Another Tank, this time based on the "surbaissé" Type 57S, won Le Mans
24 Hours of Le Mans
The 24 Hours of Le Mans is the world's oldest sports car race in endurance racing, held annually since near the town of Le Mans, France. Commonly known as the Grand Prix of Endurance and Efficiency, race teams have to balance speed against the cars' ability to run for 24 hours without sustaining...
again in 1939. Shortly afterwards, Jean Bugatti
Jean Bugatti
Jean Bugatti was an French/Italian automotive designer and test engineer.Born Gianoberto Maria Carlo Bugatti in Cologne, Germany, he was the eldest son of Ettore Bugatti. Soon after his birth the family moved to the village of Dorlisheim near Molsheim in Alsace where his father built the new...
took the winning car for a test on the Molsheim
Molsheim
Molsheim is a commune in the Bas-Rhin department in Alsace in north-eastern France. The total population in 2006 was 9,382. Molsheim had been a very fast growing city between the French censuses of 1968 and 1999, passing from 5,739 to 9,331 inhabitants, but this increase came to a noticeable halt...
-Strasbourg
Strasbourg
Strasbourg is the capital and principal city of the Alsace region in eastern France and is the official seat of the European Parliament. Located close to the border with Germany, it is the capital of the Bas-Rhin département. The city and the region of Alsace are historically German-speaking,...
road. Swerving to avoid a drunken bicyclist on the closed road, Bugatti crashed the car and died at age 30.

The Atalante was a two door coupe body style similar to and built after the Atlantic, built on both the Type 57 and 57S, but with a single piece windscreen and no fin. Only 17 Atalante cars were made, four of which reside in the Cité de l'Automobile Museum in Mulhouse
Mulhouse
Mulhouse |mill]] hamlet) is a city and commune in eastern France, close to the Swiss and German borders. With a population of 110,514 and 278,206 inhabitants in the metropolitan area in 2006, it is the largest city in the Haut-Rhin département, and the second largest in the Alsace region after...
, France
France
The French Republic , The French Republic , The French Republic , (commonly known as France , is a unitary semi-presidential republic in Western Europe with several overseas territories and islands located on other continents and in the Indian, Pacific, and Atlantic oceans. Metropolitan France...
(formerly known as the Musee Nationale de L'Automobile de Mulhouse). The name Atalante was derived from a heroine of Greek mythology, Atalanta
Atalanta
Atalanta is a character in Greek mythology.-Legend:Atalanta was the daughter of Iasus , a Boeotian or an Arcadian princess . She is often described as a goddess. Apollodorus is the only one who gives an account of Atalanta’s birth and upbringing...
.

In 2008 the Bugatti Type 57S with chassis
Chassis
A chassis consists of an internal framework that supports a man-made object. It is analogous to an animal's skeleton. An example of a chassis is the underpart of a motor vehicle, consisting of the frame with the wheels and machinery.- Vehicles :In the case of vehicles, the term chassis means the...
number 57502 built in 1937 with the Atalante coachwork
Coachwork
Coachwork is the body of a horse-drawn coach or carriage, a motor vehicle , a railroad car or railway carriage. Usually reserved for bodies built on a separate chassis, rather than being of unitary or monocoque construction...
for Francis Curzon, 5th Earl Howe was discovered in a private garage
Garage (house)
A residential garage is part of a home, or an associated building, designed or used for storing a vehicle or vehicles. In some places the term is used synonymously with "carport", though that term normally describes a structure that is not completely enclosed.- British residential garages:Those...
in Newcastle upon Tyne
Newcastle upon Tyne
Newcastle upon Tyne is a city and metropolitan borough of Tyne and Wear, in North East England. Historically a part of Northumberland, it is situated on the north bank of the River Tyne...
, having been stored untouched for 48 years and known about only by a select few people. It was auctioned in February 2009 at the Retromobile motor show in Paris, France, fetching €3.4 million (~ US$5 million), becoming one of the highest valued cars in automotive history, owing much to its extremely low mileage
Odometer
An odometer or odograph is an instrument that indicates distance traveled by a vehicle, such as a bicycle or automobile. The device may be electronic, mechanical, or a combination of the two. The word derives from the Greek words hodós and métron...
, original condition and ownership pedigree.
The source of this article is wikipedia, the free encyclopedia.  The text of this article is licensed under the GFDL.