Encyclopedia
Brutus de Villeroi was a French
France in the nineteenth century
The History of France from 1789 to 1914 extends from the French Revolution to World War I and includes:*French Revolution *French First Republic *First French Empire under Napoleon...
engineer of the 19th century, born as Brutus Villeroi (he added the aristocratic "de" in his later years) in the city of Tours
Tours
Tours is a city in central France, the capital of the Indre-et-Loire department.It is located on the lower reaches of the river Loire, between Orléans and the Atlantic coast. Touraine, the region around Tours, is known for its wines, the alleged perfection of its local spoken French, and for the...
and soon moved to Nantes
Nantes
Nantes is a city in western France, located on the Loire River, from the Atlantic coast. The city is the 6th largest in France, while its metropolitan area ranks 8th with over 800,000 inhabitants....
, who developed some of the first operational submarine
Submarine
A submarine is a watercraft capable of independent operation below the surface of the water. It differs from a submersible, which has more limited underwater capability...
s, and the first submarine of the United States Navy
United States Navy
The United States Navy is the naval warfare service branch of the United States Armed Forces and one of the seven uniformed services of the United States. The U.S. Navy is the largest in the world; its battle fleet tonnage is greater than that of the next 13 largest navies combined. The U.S...
, the Alligator
Alligator
An alligator is a crocodilian in the genus Alligator of the family Alligatoridae. There are two extant alligator species: the American alligator and the Chinese alligator ....
in 1862. 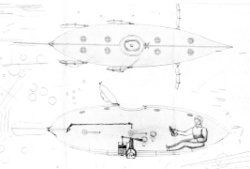 The submarine was 10' 6" long by 27" high by 25" wide and displaced about six tons when submerged. She was equipped with eight dead-lights on top to provide interior light, and a top hatch with a retractable conning tower for surface navigation. For propulsion, she had three sets of duck-foot paddles and a large rudder. She was also equipped with a hatches with leather seals in order to make some manipulations outside of hull, a small ballast system with a lever and piston, and a 50 lb anchor
Anchor
An anchor is a device, normally made of metal, that is used to connect a vessel to the bed of a body of water to prevent the vessel from drifting due to wind or current. The word derives from Latin ancora, which itself comes from the Greek ἄγκυρα .Anchors can either be temporary or permanent...
. The ship had a complement of three men.

De Villeroi tried several times to sell his submarine designs to the French Navy
French Navy
The French Navy, officially the Marine nationale and often called La Royale is the maritime arm of the French military. It includes a full range of fighting vessels, from patrol boats to a nuclear powered aircraft carrier and 10 nuclear-powered submarines, four of which are capable of launching...
(1832, 1855 and 1863), but he was apparently turned down every time.

During the late 1850s, Brutus de Villeroi went to Philadelphia, Pennsylvania
Pennsylvania
The Commonwealth of Pennsylvania is a U.S. state that is located in the Northeastern and Mid-Atlantic regions of the United States. The state borders Delaware and Maryland to the south, West Virginia to the southwest, Ohio to the west, New York and Ontario, Canada, to the north, and New Jersey to...
in the United States
United States
The United States of America is a federal constitutional republic comprising fifty states and a federal district...
, where he developed several submarines. He is recorded in a 1860 American census, where his occupation is described as "natural genius
Genius
Genius is something or someone embodying exceptional intellectual ability, creativity, or originality, typically to a degree that is associated with the achievement of unprecedented insight....
".

His first American submarine was built for salvage purposes, and it gained fame when it was seized on May 16, 1861, by the suspicious Philadelphia police as it sailed up the Delaware River
Delaware River
The Delaware River is a major river on the Atlantic coast of the United States.A Dutch expedition led by Henry Hudson in 1609 first mapped the river. The river was christened the South River in the New Netherland colony that followed, in contrast to the North River, as the Hudson River was then...
. Commander Henry K. Hoff, USN, wrote a report to Captain S.F. Dubont, Commanding Officer of Naval Station Philadelphia, describing the performance of the submarine and its interest to the Navy (Full text ):

"In justice to Mr. De Villeroi we should state that the boat in question was constructed for salvage purposes and not for war uses, (for the latter, he proposes if his services are accepted by the Government to construct another on a larger scale whose greater capacity would afford additional facilities for the maneuvers of the men while it would also be provided with greatly increased power of propulsion) so that in the experiment we have considered the machine employed simple as a model to demonstrate the principles to be established by the inventor." (Letter by Henry K. Hoff, Commander, 1861)

Brutus de Villeroi's next ship, the USS Alligator, would be largely inspired from this design. 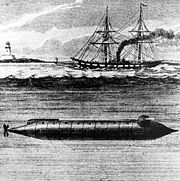 De Villeroi supervised the first phased of the construction in Philadelphia, but was progressively evicted from the project as he opposed some modifications to his design.

In 1863, Brutus de Villeroi, after a dispute with his American associates, proposed his submarine design to the government of Napoleon III of France
Napoleon III of France
Louis-Napoléon Bonaparte was the President of the French Second Republic and as Napoleon III, the ruler of the Second French Empire. He was the nephew and heir of Napoleon I, christened as Charles Louis Napoléon Bonaparte...
, but it was rejected as impractical and poorly researched. The French Navy was also already working on another design, Plongeur
Plongeur
Plongeur was a French submarine launched on 16 April 1863. She was the first submarine in the world to be propelled by mechanical power....
, with a compressed air engine, which was launched in 1863.