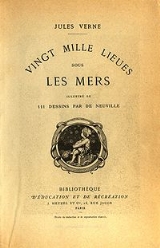 Overview
Twenty Thousand Leagues Under the Sea is a classic science fiction
Science fiction
Science fiction is a genre of fiction dealing with imaginary but more or less plausible content such as future settings, futuristic science and technology, space travel, aliens, and paranormal abilities...
novel by French
France
The French Republic , The French Republic , The French Republic , (commonly known as France , is a unitary semi-presidential republic in Western Europe with several overseas territories and islands located on other continents and in the Indian, Pacific, and Atlantic oceans. Metropolitan France...
writer Jules Verne
Jules Verne
Jules Gabriel Verne was a French author who pioneered the science fiction genre. He is best known for his novels Twenty Thousand Leagues Under the Sea , A Journey to the Center of the Earth , and Around the World in Eighty Days...
published in 1870
1870 in literature
The year 1870 in literature involved some significant new books.-New books:*Thomas Bailey Aldrich - The Story of a Bad Boy*Thomas Archer - The Terrible Sights of London*Rhoda Broughton - Red as a rose is she...
. It tells the story of Captain Nemo
Captain Nemo
Captain Nemo, also known as Prince Dakkar, is a fictional character featured in Jules Verne's novels Twenty Thousand Leagues Under the Sea and The Mysterious Island ....
and his submarine
Submarine
A submarine is a watercraft capable of independent operation below the surface of the water. It differs from a submersible, which has more limited underwater capability...
Nautilus
Nautilus (Verne)
The Nautilus is the fictional submarine featured in Jules Verne's novels Twenty Thousand Leagues Under the Sea and The Mysterious Island . Verne named the Nautilus after Robert Fulton's real-life submarine Nautilus...
as seen from the perspective of Professor Pierre Aronnax. The original edition had no illustrations; the first illustrated edition was published by Hetzel
Pierre-Jules Hetzel
Pierre-Jules Hetzel was a French editor and publisher. He is best known for his extraordinarily lavishly illustrated editions of Jules Verne's novels highly prized by collectors today...
with illustrations by Alphonse de Neuville and Édouard Riou
Édouard Riou
Édouard Riou was a French painter and illustrator of books by Jules Verne.Riou was a pupil of Charles-François Daubigny and Gustave Doré, graduated in 1859...
.
The title refers to the distance traveled while under the sea and not to a depth, as 20,000 leagues is over six times the diameter of Earth.

Who was good sailor, soul of his ship, believed it was a whale and he was after it, determined?

Good sailor, soul of his ship, believed it was a whale and he was after it, determined

I have an old book of "Twenty Thousands Leagues Under The Sea," and it does not have a date when it was published. The publisher of my book is shown...

In 20000 leagues under the sea. Describe the initial battle with "the monster.
More
x