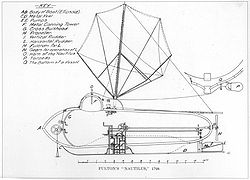 Nautilus, first tested in 1800, is often considered the first practical submarine
Submarine
A submarine is a watercraft capable of independent operation below the surface of the water. It differs from a submersible, which has more limited underwater capability...
, though preceded by Cornelius Drebbel
Cornelius Drebbel
Cornelis Jacobszoon Drebbel was the Dutch builder of the first navigable submarine in 1620. Drebbel was an innovator who contributed to the development of measurement and control systems, optics and chemistry....
's of 1620.

The Nautilus was designed between 1793 and 1797 by the American
United States
The United States of America is a federal constitutional republic comprising fifty states and a federal district...
inventor Robert Fulton
Robert Fulton
Robert Fulton was an American engineer and inventor who is widely credited with developing the first commercially successful steamboat...
, then living in the French First Republic
French First Republic
The French First Republic was founded on 22 September 1792, by the newly established National Convention. The First Republic lasted until the declaration of the First French Empire in 1804 under Napoleon I...
. He proposed to the Directory that they subsidize its construction as a means to balance British seapower, but he was turned down. His second proposal to them was that he be paid nothing until the Nautilus had sunk British shipping, and then only a small percentage of the prize money. Again, the design was rejected. Fulton directed his next proposal to the Minister of Marine, who finally granted him permission to build.

Fulton built the first Nautilus at the Perrier boatyard in Rouen
Rouen
Rouen , in northern France on the River Seine, is the capital of the Haute-Normandie region and the historic capital city of Normandy. Once one of the largest and most prosperous cities of medieval Europe , it was the seat of the Exchequer of Normandy in the Middle Ages...
of copper sheets over iron ribs. It was long and in the beam. Propulsion was provided by a hand-cranked screw propeller. Her hollow iron keel was her ballast tank, flooded and emptied to change her buoyancy. Two horizontal fins on the stubby horizontal rudder controlled angle of dive — the origin of the diving plane
Diving plane
A diving plane, also known as a hydroplane, is a control surface found on submarines which allow the vessel to pitch its bow and stern up or down to assist in the process of submerging or surfacing the boat, as well as controlling depth when submerged....
s used on all modern submarines. It resembled a modern research submarine in shape — a long teardrop with an observation dome we would call a conning tower. When surfaced, a fan-shaped collapsible sail, looking rather Chinese, provided propulsion. Air, other than that enclosed, was provided by a waterproofed leather snorkel tube.

It was always designed to carry a "carcass", as Fulton called his dragged mines
Naval mine
A naval mine is a self-contained explosive device placed in water to destroy surface ships or submarines. Unlike depth charges, mines are deposited and left to wait until they are triggered by the approach of, or contact with, an enemy vessel...
. A device on the top of the dome drove a spiked eye into the enemy's wooden hull. The submarine then released its mine on a line that went through the eye. The submarine sped away, and only when the long line had paid out would the mine strike the target hull and explode by a detonator. The mines were nothing like a self-propelled torpedo: They were variously-sized copper cylinders carrying ten to two hundred pounds of gunpowder, triggered by a gunlock mechanism that went off on contact with the hull.

Nautilus was first tested, with constant success, in dives in the Seine
Seine
The Seine is a -long river and an important commercial waterway within the Paris Basin in the north of France. It rises at Saint-Seine near Dijon in northeastern France in the Langres plateau, flowing through Paris and into the English Channel at Le Havre . It is navigable by ocean-going vessels...
near Rouen
Rouen
Rouen , in northern France on the River Seine, is the capital of the Haute-Normandie region and the historic capital city of Normandy. Once one of the largest and most prosperous cities of medieval Europe , it was the seat of the Exchequer of Normandy in the Middle Ages...
beginning July 29, 1800. As the river current interfered with some tests, Fulton took the boat to Le Havre to work in the quiet salt water of the harbor. He tested endurance with a candle lit, and found the flame did not challenge the air capacity of the snorkel. He tested the speed of his two men cranking against two men rowing on the surface, and Nautilus covered the course two minutes faster. During this time he changed the rudder, and the screw propeller to one with four vanes like a windmill.

Through friends like Gaspard Monge
Gaspard Monge
Gaspard Monge, Comte de Péluse was a French mathematician, revolutionary, and was inventor of descriptive geometry. During the French Revolution, he was involved in the complete reorganization of the educational system, founding the École Polytechnique...
and Pierre-Simon Laplace
Pierre-Simon Laplace
Pierre-Simon, marquis de Laplace was a French mathematician and astronomer whose work was pivotal to the development of mathematical astronomy and statistics. He summarized and extended the work of his predecessors in his five volume Mécanique Céleste...
, Fulton obtained an interview with Napoleon, but nothing came of it. However, the Minister of Marine was by Fulton's friends pushed into appointing a scholarly panel to assess the submarine, to consist of Volney
Constantin-François Chassebœuf
Constantin François de Chassebœuf, comte de Volney was a French philosopher, historian, orientalist, and politician...
, Monge, and Laplace.

On July 3, 1801 at Le Havre, Fulton took down the revised Nautilus to the then-remarkable depth of 25 feet (7.6 m). With his three crewmen and two candles burning he remained for an hour without difficulty. Adding a copper "bomb" (globe) containing of air extended the time underwater for the crew for at least four and a half hours. However, one of the renovations included a diameter glass in the dome, whose light he found sufficient for reading a watch, making candles during daylight activities unnecessary. Speed trials put Nautilus at two knots on the surface, and covering 400m in . He also discovered that compasses worked underwater exactly as on the surface.

The first trial of a carcass destroyed a 40-foot sloop provided by the Admiralty. Fulton suggested that not only should they be used against specific ships by submarines, but be set floating into harbors and into estuaries with the tide to wreak havoc at random.

The overseeing committee enthusiastically recommended the building of two brass subs, long, wide, with a crew of eight, and air for eight hours of submersion.

In September, Napoleon expressed interest in seeing the Nautilus, only to find that, as it had leaked badly, Fulton had her dismantled and the more important bits destroyed at the end of the tests. Despite the many reports of success by reliable witnesses like the Prefect Marine of Brest, Napoleon decided Fulton was a swindler and charlatan. The French navy had no enthusiasm for a weapon they preferred to think suicidal for the crews (though Fulton had no problems). Certainly, it would be overwhelmingly destructive for conventional ships. 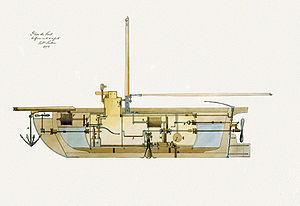 Though knowing the French had no further interest, the British preferred to keep a control on this dangerous device by paying Fulton £800 to come to England (to which had been going before France) and develop a second Nautilus for them. Once there, they focused him on carcasses, with which he neatly blew up the brig Dorothea off Walmer Castle in October 1805. The victory at Trafalgar
Battle of Trafalgar
The Battle of Trafalgar was a sea battle fought between the British Royal Navy and the combined fleets of the French Navy and Spanish Navy, during the War of the Third Coalition of the Napoleonic Wars ....
made his work no longer a danger, and he was ignored until he left, in frustration, for America in October 1806. He left his papers on submarines with the American consul in London. He never asked for them, never referred to his Nautilus work, and the papers went unpublished until 1920.

These show that his British Nautilus was planned as a long, beam sea-going boat with a crew of six, to be provisioned for 20 days at sea. The upper surface was provided with 30 carcass compartments. The hull was to imitate a sea-going sloop with conventional-looking mast and sails that could be lowered and unstepped for submersion. Her two-bladed propeller, still hand-cranked, folded up out of the water when surfaced to reduce drag. When submerged, air came through two streamlined ventilation pipes, and light from the conning tower. However, nothing of it was actually constructed.