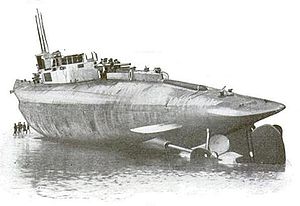 The K class submarines were a class of steam-propelled submarine
Submarine
A submarine is a watercraft capable of independent operation below the surface of the water. It differs from a submersible, which has more limited underwater capability...
s of the Royal Navy
Royal Navy
The Royal Navy is the naval warfare service branch of the British Armed Forces. Founded in the 16th century, it is the oldest service branch and is known as the Senior Service...
designed in 1913. Intended as large, fast vessels which had the endurance and speed to operate with the battle fleet
Naval fleet
A fleet, or naval fleet, is a large formation of warships, and the largest formation in any navy. A fleet at sea is the direct equivalent of an army on land....
, they gained notoriety, and the nickname of Kalamity class, for being involved in many accidents. Of the 18 built none were lost through enemy action but 6 sank in accidents. Only one ever engaged an enemy vessel, hitting a U-boat
U-boat
U-boat is the anglicized version of the German word U-Boot , itself an abbreviation of Unterseeboot , and refers to military submarines operated by Germany, particularly in World War I and World War II...
amidships though the torpedo
Torpedo
The modern torpedo is a self-propelled missile weapon with an explosive warhead, launched above or below the water surface, propelled underwater towards a target, and designed to detonate either on contact with it or in proximity to it.The term torpedo was originally employed for...
failed to explode.

In 1913 an outline design was prepared for a new submarine class which could operate with the fleet, sweeping ahead of it in a fleet action. At that time the only way which they could have sufficient surface speed, of 24 knots (44 km/h), to keep up with fleet was to be steam powered. In a fleet action, the submarines would get around the back of the enemy fleet and ambush it as it retreated.

The boats were to be 338 ft (103 m) long and displace 1,700 tons on the surface. The design was not proceeded with until results from trials of HMS Nautilus and Swordfish
HMS Swordfish (1916)
HMS Swordfish was an experimental submarine built for the Royal Navy before the First World War to meet the Navy's goal of an "overseas" submarine capable of on the surface. Diesel engines of the period were unreliable and not very powerful so steam turbines were proposed instead to meet the RN's...
had taken place, and in the event a slightly smaller three-screw submarine, the J class
British J class submarine
The J class of submarines was a seven submarine class developed by the Royal Navy prior to the First World War in response to claims that Germany was developing submarines that were fast enough to operate alongside surface fleets...
, was designed. By the middle of 1915 it was clear that the J class would not meet expectations, in particular they would only reach 19 knots (35 km/h) — still less than the 21 knots (39 km/h) needed to accompany the fleet.

The K class design was resurrected and 21 boats ordered in August at a cost of £340,000 each. In the event only 17 were constructed in the first instance, the orders for the last four being cancelled and replaced by ones for the M class
British M class submarine
The British Royal Navy M-class submarines were a small class of diesel electric submarine built during World War I. The unique feature of the class was a 12-inch gun mounted in a turret forward of the conning tower.-Background:...
.

Six improved versions, K22 to K28 were ordered in October 1917 but the end of the First World War meant that only K26
HMS K26
HMS K26 was the only modified K-class submarine of Britain's Royal Navy to be completed. One of six ordered, she was laid down towards the end of the First World War but not completed until five years after its end....
was completed.

The double hull design had a reserve of buoyancy
Buoyancy
In physics, buoyancy is a force exerted by a fluid that opposes an object's weight. In a column of fluid, pressure increases with depth as a result of the weight of the overlying fluid. Thus a column of fluid, or an object submerged in the fluid, experiences greater pressure at the bottom of the...
of 32.5 percent . Although powered on the surface by oil-fired steam turbine
Steam turbine
A steam turbine is a mechanical device that extracts thermal energy from pressurized steam, and converts it into rotary motion. Its modern manifestation was invented by Sir Charles Parsons in 1884....
s, they were also equipped with an 800 hp (0.6 MW) diesel generator
Diesel generator
A diesel generator is the combination of a diesel engine with an electrical generator to generate electrical energy....
to charge the batteries and provide limited propulsive power in the event of problems with the boilers.

This pushed the displacement up to 1,980 tons on the surface, 2,566 tons submerged. They were equipped with four 18 inch (460 mm) torpedo
Torpedo
The modern torpedo is a self-propelled missile weapon with an explosive warhead, launched above or below the water surface, propelled underwater towards a target, and designed to detonate either on contact with it or in proximity to it.The term torpedo was originally employed for...
tubes at the bow
Bow (ship)
The bow is a nautical term that refers to the forward part of the hull of a ship or boat, the point that is most forward when the vessel is underway. Both of the adjectives fore and forward mean towards the bow...
, two on either beam and another pair in a swivel mounting on the superstructure for night use. The swivel pair were later removed because they were prone to damage in rough seas.

They were fitted with a proper deckhouse built over and around the conning tower
Conning tower
A conning tower is a raised platform on a ship or submarine, often armored, from which an officer can con the vessel; i.e., give directions to the helmsman. It is usually located as high on the ship as practical, to give the conning team good visibility....
which gave the crew much better protection than the canvas
Canvas
Canvas is an extremely heavy-duty plain-woven fabric used for making sails, tents, marquees, backpacks, and other items for which sturdiness is required. It is also popularly used by artists as a painting surface, typically stretched across a wooden frame...
screens which had been fitted in previous Royal Navy submarines.

The great size of the boats compared to their predecessors led to control and depth keeping problems particularly as efficient telemotor controls had not yet been developed. This was made worse by the estimated maximum diving depth of 200 ft (60 m) being much less than their length. Even a 10 degree angle on the 339 ft (103 m) long hull would cause a 59 ft (18 m) difference in depth of the bow and stern, and 30 degrees would produce 170 ft (50 m) which meant that while the stern would almost be on the surface, the bow would almost be at its maximum safe depth. The problems were made even more dangerous because the eight internal bulkhead
Bulkhead (partition)
A bulkhead is an upright wall within the hull of a ship or within the fuselage of an airplane. Other kinds of partition elements within a ship are decks and deckheads.-Etymology:...
s were designed and tested during development to stand a pressure equivalent to only 70 ft (20 m).

K3
HMS K3
HMS K3 was the lead ship of the British K class submarines. She was laid down on 21 May 1915 by Vickers, Barrow-in-Furness. She was commissioned on 4 August 1916.In December 1916, K3, with the future King George VI aboard,...
was the first of the class to be completed, in May 1916 and trials showed numerous problems. The most serious was the high temperatures in the boiler room which was to some extent alleviated by installing bigger fans.

Steaming at speed tended to push the bow into the water making the already poor sea-keeping worse. To fix this a bulbous swan bow was added. Nevertheless there were still problems, the most embarrassing being that in a heavy sea water could enter the boat through the twin funnel
Funnel
A funnel is a pipe with a wide, often conical mouth and a narrow stem. It is used to channel liquid or fine-grained substances into containers with a small opening. Without a funnel, spillage would occur....
s and put the boiler
Boiler
A boiler is a closed vessel in which water or other fluid is heated. The heated or vaporized fluid exits the boiler for use in various processes or heating applications.-Materials:...
fires out.

They suffered numerous accidents, largely caused by their poor maneuverability coupled with operating with the surface fleet, and which caused the loss of the following:


Dive time was around 5 minutes, with the record being 3 minutes 25 seconds which was claimed by K8
HMS K8
HMS K8 was a British K class submarine built by Vickers, Barrow-in-Furness. She was laid down on 28 June 1915 and was commissioned on 6 March 1917. K8 was sold on 11 October 1923.- References :...
. The leisurely time allowed the captain
Captain (naval)
Captain is the name most often given in English-speaking navies to the rank corresponding to command of the largest ships. The NATO rank code is OF-5, equivalent to an army full colonel....
the luxury of being able to walk around the superstructure to ensure that the funnels were securely folded.

The last, improved, boat, K26 was completed slowly, finally being commissioned in 1923. She had six 21 inch (530 mm) bow torpedo tubes but retained the 18 inch (460 mm) beam tubes. Her higher casing almost cured the problems of seawater entering the boiler room and improved ballast tank arrangements cut the diving time to 3 minutes 12 seconds to get to 80 ft (24 m). She also had an increased maximum diving depth of 250 ft (75 m). 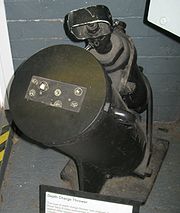 Although the concept of a submarine fast enough to operate with a battle fleet eventually fell out of favour, it was still an important consideration in the design of the Thames class in the late 1920s.