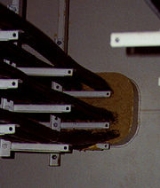 Encyclopedia
A bulkhead is an upright wall within the hull
Hull (watercraft)
A hull is the watertight body of a ship or boat. Above the hull is the superstructure and/or deckhouse, where present. The line where the hull meets the water surface is called the waterline.The structure of the hull varies depending on the vessel type...
of a ship or within the fuselage
Fuselage
The fuselage is an aircraft's main body section that holds crew and passengers or cargo. In single-engine aircraft it will usually contain an engine, although in some amphibious aircraft the single engine is mounted on a pylon attached to the fuselage which in turn is used as a floating hull...
of an airplane. Other kinds of partition elements within a ship are decks
Deck (ship)
A deck is a permanent covering over a compartment or a hull of a ship. On a boat or ship, the primary deck is the horizontal structure which forms the 'roof' for the hull, which both strengthens the hull and serves as the primary working surface...
and deckhead
Deckhead
A deckhead is the underside of a deck in a ship. It bears the same relationship to a compartment on the deck below as does the ceiling to the room of a house....
s.

The word bulki meant "cargo" in Old Norse
Old Norse
Old Norse is a North Germanic language that was spoken by inhabitants of Scandinavia and inhabitants of their overseas settlements during the Viking Age, until about 1300....
. Sometime in the 15th century sailors and builders in Europe realized that walls within a vessel would prevent cargo from shifting during passage. In shipbuilding, any vertical panel was called a "head". So walls installed abeam (side-to-side) in a vessel's hull were called "bulkheads." Now, the term bulkhead applies to every vertical panel aboard a ship, except for the hull itself. 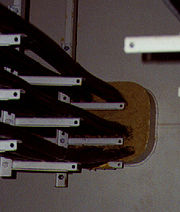 Openings in fire-resistance rated bulkheads and decks must be firestop
Firestop
A firestop is a passive fire protection system of various components used to seal openings and joints in fire-resistance rated wall and/or floor assemblies, based on fire testing and certification listings....
ped to restore the fire-resistance ratings that would otherwise be compromised, if the openings were left unsealed. The authority having jurisdiction for such measures varies depending upon the flag of the ship. Merchant vessels are typically subject to the regulations and inspections of the Coast Guards of the flag country. Combat ships are subject to the regulations set out by the navy of the country that owns the ship.


Prevention of damage from EMI and EMP

Bulkheads and decks of warships may be fully grounded
Ground (electricity)
In electrical engineering, ground or earth may be the reference point in an electrical circuit from which other voltages are measured, or a common return path for electric current, or a direct physical connection to the Earth....
(electrically) as a countermeasure
Countermeasure
A countermeasure is a measure or action taken to counter or offset another one. As a general concept it implies precision, and is any technological or tactical solution or system designed to prevent an undesirable outcome in the process...
against damage from EMI
Electromagnetic interference
Electromagnetic interference is disturbance that affects an electrical circuit due to either electromagnetic induction or electromagnetic radiation emitted from an external source. The disturbance may interrupt, obstruct, or otherwise degrade or limit the effective performance of the circuit...
and EMP
Electromagnetic pulse
An electromagnetic pulse is a burst of electromagnetic radiation. The abrupt pulse of electromagnetic radiation usually results from certain types of high energy explosions, especially a nuclear explosion, or from a suddenly fluctuating magnetic field...
due to nuclear or electromagnetic bomb detonations near the ship, which could severely damage the vital electronic system
System
System is a set of interacting or interdependent components forming an integrated whole....
s on a ship.

In the case of firestops, cable jacketing is usually removed within the seal and firestop rubber modules are internally fitted with copper shields, which contact the cables' armour in order to ground the seal.

The term was later applied to other vehicles, such as railroad car
Railroad car
A railroad car or railway vehicle , also known as a bogie in Indian English, is a vehicle on a rail transport system that is used for the carrying of cargo or passengers. Cars can be coupled together into a train and hauled by one or more locomotives...
s, hopper car
Hopper car
A hopper car is a type of railroad freight car used to transport loose bulk commodities such as coal, ore, grain, track ballast, and the like. The name originated from the coke manufacturing industry which is part of the steel industry ....
s tram
Tram
A tram is a passenger rail vehicle which runs on tracks along public urban streets and also sometimes on separate rights of way. It may also run between cities and/or towns , and/or partially grade separated even in the cities...
s, automobile
Automobile
An automobile, autocar, motor car or car is a wheeled motor vehicle used for transporting passengers, which also carries its own engine or motor...
s, aircraft
Aircraft
An aircraft is a vehicle that is able to fly by gaining support from the air, or, in general, the atmosphere of a planet. An aircraft counters the force of gravity by using either static lift or by using the dynamic lift of an airfoil, or in a few cases the downward thrust from jet engines.Although...
or spacecraft
Spacecraft
A spacecraft or spaceship is a craft or machine designed for spaceflight. Spacecraft are used for a variety of purposes, including communications, earth observation, meteorology, navigation, planetary exploration and transportation of humans and cargo....
, as well as to containers
Containerization
Containerization is a system of freight transport based on a range of steel intermodal containers...
, intermediate bulk container
Intermediate bulk container
An Intermediate bulk container is a container used for transport and storage of fluids and bulk materials. The construction of the IBC container and the materials used are chosen depending on the application, i.e...
s and fuel tank
Fuel tank
A fuel tank is safe container for flammable fluids. Though any storage tank for fuel may be so called, the term is typically applied to part of an engine system in which the fuel is stored and propelled or released into an engine...
s. In some of these cases bulkheads are airtight to prevent air leakage or the spread of a fire. The term may also be used for the "end walls" of bulkhead flatcars.

Mechanically, a partition or panel through which connectors pass, or a connector designed to pass through a partition.

Architecture
Architecture
Architecture is both the process and product of planning, designing and construction. Architectural works, in the material form of buildings, are often perceived as cultural and political symbols and as works of art...
The term is frequently used to denote any boxed in beam or other downstand from a ceiling and by extension even the vertical downstand face of an area of lower ceiling beyond. This usage presumably derives from experience on boats where to maintain the structural function personnel openings through bulkheads always retain a portion of the bulkhead crossing the head of the opening. Head strikes on these downstand elements are commonplace hence in architecture any overhead downstand element comes to be referred to as a bulkhead.