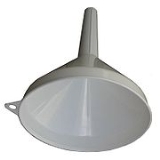 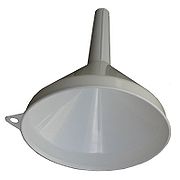 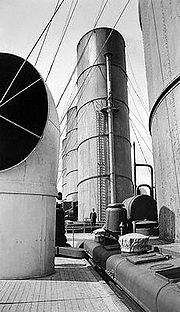 A funnel is a pipe with a wide, often conical mouth and a narrow stem. It is used to channel liquid
Liquid
Liquid is one of the three classical states of matter . Like a gas, a liquid is able to flow and take the shape of a container. Some liquids resist compression, while others can be compressed. Unlike a gas, a liquid does not disperse to fill every space of a container, and maintains a fairly...
or fine-grained substances into containers with a small opening. Without a funnel, spillage would occur.

Funnels are usually made of stainless steel
Stainless steel
In metallurgy, stainless steel, also known as inox steel or inox from French "inoxydable", is defined as a steel alloy with a minimum of 10.5 or 11% chromium content by mass....
, aluminium
Aluminium
Aluminium or aluminum is a silvery white member of the boron group of chemical elements. It has the symbol Al, and its atomic number is 13. It is not soluble in water under normal circumstances....
, glass
Glass
Glass is an amorphous solid material. Glasses are typically brittle and optically transparent.The most familiar type of glass, used for centuries in windows and drinking vessels, is soda-lime glass, composed of about 75% silica plus Na2O, CaO, and several minor additives...
, or plastic
Plastic
A plastic material is any of a wide range of synthetic or semi-synthetic organic solids used in the manufacture of industrial products. Plastics are typically polymers of high molecular mass, and may contain other substances to improve performance and/or reduce production costs...
. The material used in its construction should be sturdy enough to withstand the weight of the substance being transferred, and it should not react with the substance. For this reason, stainless steel or glass are useful in transferring diesel, while plastic funnels are useful in the kitchen. Sometimes disposable paper
Paper
Paper is a thin material mainly used for writing upon, printing upon, drawing or for packaging. It is produced by pressing together moist fibers, typically cellulose pulp derived from wood, rags or grasses, and drying them into flexible sheets....
funnels are used in cases where it would be difficult to adequately clean the funnel afterward (for example, in adding motor oil to a car). Dropper funnels, also called dropping funnel
Dropping funnel
A dropping funnel is a type of laboratory glassware used to transfer fluids. They are fitted with a stopcock which allows the flow of to be controlled. Dropping funnels are useful for adding reagents slowly, i.e. drop-wise...
s or tap funnels, have a tap
Tap (valve)
A tap is a valve controlling release of liquids or gas. In the British Isles and most of the Commonwealth, the word is used for any everyday type of valve, particularly the fittings that control water supply to bathtubs and sinks. In the U.S., the term "tap" is more often used for beer taps,...
to allow the controlled release of a liquid.

The term funnel is sometimes used to refer to the chimney
Chimney
A chimney is a structure for venting hot flue gases or smoke from a boiler, stove, furnace or fireplace to the outside atmosphere. Chimneys are typically vertical, or as near as possible to vertical, to ensure that the gases flow smoothly, drawing air into the combustion in what is known as the...
or smokestack on a steam locomotive
Locomotive
A locomotive is a railway vehicle that provides the motive power for a train. The word originates from the Latin loco – "from a place", ablative of locus, "place" + Medieval Latin motivus, "causing motion", and is a shortened form of the term locomotive engine, first used in the early 19th...
and usually used in referring to the same on a ship
Ship
Since the end of the age of sail a ship has been any large buoyant marine vessel. Ships are generally distinguished from boats based on size and cargo or passenger capacity. Ships are used on lakes, seas, and rivers for a variety of activities, such as the transport of people or goods, fishing,...
. There is also a type of spider
Spider
Spiders are air-breathing arthropods that have eight legs, and chelicerae with fangs that inject venom. They are the largest order of arachnids and rank seventh in total species diversity among all other groups of organisms...
known as a funnel-web
Funnel-web spider
Funnel-web spider can refer to:* Araneomorph funnel-web spider, the modern funnel-web spider, suborder Araneomorph* Australian funnel-web spider, including** Sydney funnel-web spider* Funnel-web tarantula:** Dipluridae, suborder Mygalomorphae...
due to its habit of building its web in the shape of a funnel. The term funnel is even applied to other seemingly strange objects like a smoking pipe or even a humble kitchen bin
Bin
Bīn may refer to:* Pungi, a South Asian double clarinet* Veena, a North Indian stick zither* 宾 , a Chinese character meaning guest, visitor...
. 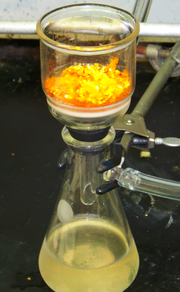 There are many different kinds of funnels that have been adapted for specialized applications in the laboratory. Filter funnel
Filter funnel
A filter funnel is a laboratory funnel used for separating solids from liquids via the laboratory process of filtering.In order to achieve this, a disk shaped piece of filter paper is usually folded into a cone and placed within the funnel. The suspension of solid and liquid is then poured through...
s, thistle funnels (shaped like thistle
Thistle
Thistle is the common name of a group of flowering plants characterised by leaves with sharp prickles on the margins, mostly in the family Asteraceae. Prickles often occur all over the plant – on surfaces such as those of the stem and flat parts of leaves. These are an adaptation that protects the...
flowers), and dropping funnel
Dropping funnel
A dropping funnel is a type of laboratory glassware used to transfer fluids. They are fitted with a stopcock which allows the flow of to be controlled. Dropping funnels are useful for adding reagents slowly, i.e. drop-wise...
s have stopcocks which allow the fluids to be added to a flask slowly. For solids, a powder funnel with a wide and short stem is more appropriate as it does not clog easily.

When used with filter paper
Filter paper
Filter paper is a semi-permeable paper barrier placed perpendicular to a liquid or air flow. It is used to separate fine solids from liquids or air.-Properties:Filter paper comes in various porosities and grades depending on the applications it is meant for...
, filter funnels, Büchner
Büchner funnel
A Büchner funnel is a piece of laboratory equipment used in suction filtration. It is traditionally made of porcelain, but glass and plastic funnels are also available. On top of the funnel-shaped part there is a cylinder with a perforated plate separating it from the funnel. The Hirsch funnel has...
and Hirsch funnels can be used to remove fine particles from a liquid in a process called filtration
Filtration
Filtration is commonly the mechanical or physical operation which is used for the separation of solids from fluids by interposing a medium through which only the fluid can pass...
. For more demanding applications, the filter paper in the latter two may be replaced with a sintered glass frit.

Glass is the material of choice for laboratory applications due to its inertness compared with metals or plastics. However, plastic funnels made of nonreactive polyethylene
Polyethylene
Polyethylene or polythene is the most widely used plastic, with an annual production of approximately 80 million metric tons...
are used for transferring aqueous solutions. Plastic is most often used for powder funnels that do not come into contact with solvent in normal use.

In the East Coast of the United States, "beer funnel" is another term for "beer bong". "Funneling" a beer involves pouring an entire beer into a funnel attached to a tube, in which a person then consumes the beer via the tube.
The source of this article is wikipedia, the free encyclopedia.  The text of this article is licensed under the GFDL.