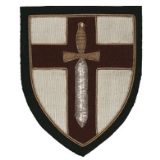 Encyclopedia
The First Army was a field army
Army
An army An army An army (from Latin arma "arms, weapons" via Old French armée, "armed" (feminine), in the broadest sense, is the land-based military of a nation or state. It may also include other branches of the military such as the air force via means of aviation corps...
of the British Army
British Army
The British Army is the land warfare branch of Her Majesty's Armed Forces in the United Kingdom. It came into being with the unification of the Kingdom of England and Scotland into the Kingdom of Great Britain in 1707. The new British Army incorporated Regiments that had already existed in England...
that existed during the First and Second World Wars. Despite being a British command, the First Army also included Indian
Indian Army
The Indian Army is the land based branch and the largest component of the Indian Armed Forces. With about 1,100,000 soldiers in active service and about 1,150,000 reserve troops, the Indian Army is the world's largest standing volunteer army...
and Portuguese
Portuguese Army
The Portuguese Army is the ground branch of the Portuguese Armed Forces which, in co-operation with other branches of the Portuguese military, is charged with the defence of Portugal...
forces during the First World War and American and French
French Army
The French Army, officially the Armée de Terre , is the land-based and largest component of the French Armed Forces.As of 2010, the army employs 123,100 regulars, 18,350 part-time reservists and 7,700 Legionnaires. All soldiers are professionals, following the suspension of conscription, voted in...
during the Second World War.

The First Army was part of the British Army during the First World War
British Army during World War I
The British Army during World War I fought the largest and most costly war in its long history. Unlike the French and German Armies, its units were made up exclusively of volunteers—as opposed to conscripts—at the beginning of the conflict...
and was formed on 26 December 1914 when the corps
Corps
A corps is either a large formation, or an administrative grouping of troops within an armed force with a common function such as Artillery or Signals representing an arm of service...
of the British Expeditionary Force were divided into the First Army under Lieutenant-General Sir Douglas Haig
Douglas Haig, 1st Earl Haig
Field Marshal Douglas Haig, 1st Earl Haig, KT, GCB, OM, GCVO, KCIE, ADC, was a British senior officer during World War I. He commanded the British Expeditionary Force from 1915 to the end of the War...
and the Second Army  under Horace Smith-Dorrien
Horace Smith-Dorrien
General Sir Horace Lockwood Smith-Dorrien GCB, GCMG, DSO, ADC was a British soldier and commander of the British II Corps and Second Army of the BEF during World War I.-Early life and career:...
. First Army had the I Corps, IV Corps and the Indian Corps
I Corps (British India)
for the current Indian Army formation see I Corps The I Indian Corps was an army corps of the British Indian Army in World War I. It was formed at the outbreak of war under the title Indian Corps from troops sent to the Western Front. The British Indian Army did not have a pre-war corps structure,...
under command. The First Army suffered reverses at Vimy Ridge in May 1916 and at Fromelles
Fromelles
-References:* -External links:*** video report from the Commonwealth War Graves Commission*...
the following month. From 1917, the First Army also included the Portuguese Expeditionary Corps
Portuguese Expeditionary Corps
The Portuguese Expeditionary Corps was the main military force from Portugal that participated in the First World War. Portuguese neutrality ended in 1916 after the seizure of German merchant ships resulted in Germany declaring war...
. The First Army took part in the 1918 offensive
Hundred Days Offensive
The Hundred Days Offensive was the final period of the First World War, during which the Allies launched a series of offensives against the Central Powers on the Western Front from 8 August to 11 November 1918, beginning with the Battle of Amiens. The offensive forced the German armies to retreat...
that drove the Germans back and virtually ended the war.

The First Army was also part of the British Army during the Second World War. It was formed to command the British and American land forces which had landed as part of Operation Torch
Operation Torch
Operation Torch was the British-American invasion of French North Africa in World War II during the North African Campaign, started on 8 November 1942....
in Morocco
Morocco
Morocco , officially the Kingdom of Morocco , is a country located in North Africa. It has a population of more than 32 million and an area of 710,850 km², and also primarily administers the disputed region of the Western Sahara...
and Algeria
Algeria
Algeria , officially the People's Democratic Republic of Algeria , also formally referred to as the Democratic and Popular Republic of Algeria, is a country in the Maghreb region of Northwest Africa with Algiers as its capital.In terms of land area, it is the largest country in Africa and the Arab...
on 8 November 1942 and it was commanded by Lieutenant-General Sir Kenneth Anderson
Kenneth Arthur Noel Anderson
General Sir Kenneth Arthur Noel Anderson, KCB, MC was a British Army officer in both the First and Second World Wars. He is mainly remembered as the commander of the First Army during Operation Torch, the Allied invasion of Tunisia. He had an outwardly reserved character and did not court...
. First Army headquarters was formally activated on 9 November 1942 when Anderson arrived in Algiers
Algiers
' is the capital and largest city of Algeria. According to the 1998 census, the population of the city proper was 1,519,570 and that of the urban agglomeration was 2,135,630. In 2009, the population was about 3,500,000...
to assume command of the redesignated Eastern Task Force.

It initially consisted of British and American forces only. After the surrender of French forces following the German abrogation of their armistice agreement with Vichy France
Vichy France
Vichy France, Vichy Regime, or Vichy Government, are common terms used to describe the government of France that collaborated with the Axis powers from July 1940 to August 1944. This government succeeded the Third Republic and preceded the Provisional Government of the French Republic...
, French units were also added to its order of battle. It eventually consisted of four corps, the U.S. II Corps, the British V Corps
V Corps (United Kingdom)
V Corps was an army corps of the British Army in both the First and Second World War. It was first organised in February 1915 and fought through World War I on the Western front...
, British IX Corps and French XIX Corps
XIX Corps (France)
The French 19th Army Corps was formed in 1873. Anthony Clayton writes that the title of the 19th Army Corps was given to the Army of Africa in 1873. Antoine Chanzy commanded the corps between 1873 and 1879, at which time the commander also held the post of Governor of Algeria.It was in service...
.

After the landings, Anderson's forces rushed east
Run for Tunis
The Run for Tunis, part of the Tunisia Campaign in the Second World War, took place during the November and December 1942. Once French opposition to the Allied Operation Torch landings had ceased in mid-November, the Allies made a rapid advance by a division-sized force east from Algeria in an...
in a bid to capture Tunis
Tunis
Tunis is the capital of both the Tunisian Republic and the Tunis Governorate. It is Tunisia's largest city, with a population of 728,453 as of 2004; the greater metropolitan area holds some 2,412,500 inhabitants....
and Bizerte
Bizerte
Bizerte or Benzert , is the capital city of Bizerte Governorate in Tunisia and the northernmost city in Africa. It has a population of 230,879 .-History:...
before German forces could reach there in large numbers. They failed. After that failure, a period of consolidation was forced upon them. The logistics support for the Army was greatly improved and airfields for its supporting aircraft greatly multiplied. By the time the British Eighth Army approached the Tunisian border from the east, following its long pursuit of Erwin Rommel
Erwin Rommel
Erwin Johannes Eugen Rommel , popularly known as the Desert Fox , was a German Field Marshal of World War II. He won the respect of both his own troops and the enemies he fought....
's forces after El Alamein
El Alamein
El Alamein is a town in the northern Matrouh Governorate of Egypt. Located on the Mediterranean Sea, it lies west of Alexandria and northwest of Cairo. As of 2007, it has a local population of 7,397 inhabitants.- Climate :...
, 1st Army was again ready to strike.

Supported by elements of XII Tactical Air Command
XII Tactical Air Command
The XII Tactical Air Command is an inactive United States Air Force unit. Its last assignment was with the United States Air Forces in Europe, based at Bad Kissingen, Germany...
and No. 242 Group RAF
No. 242 Group RAF
No. 242 Group was a group of the British Royal Air Force formed on 24 August 1942. Its first commander was Air Commodore George Lawson.-History:...
, First Army carried the main weight of 18th Army Group's offensive to conclude the Tunisia Campaign
Tunisia Campaign
The Tunisia Campaign was a series of battles that took place in Tunisia during the North African Campaign of the Second World War, between Axis and Allied forces. The Allies consisted of British Imperial Forces, including Polish and Greek contingents, with American and French corps...
and finish off Axis forces in North Africa. The victory was won in May 1943 in a surrender that, in numbers captured at least, equalled Stalingrad. Shortly after the surrender, First Army disbanded, having served its purpose.