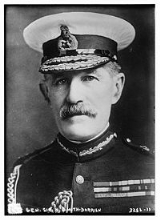 Overview
General
General
A general officer is an officer of high military rank, usually in the army, and in some nations, the air force. The term is widely used by many nations of the world, and when a country uses a different term, there is an equivalent title given....
Sir Horace Lockwood Smith-Dorrien GCB
Order of the Bath
The Most Honourable Order of the Bath is a British order of chivalry founded by George I on 18 May 1725. The name derives from the elaborate mediæval ceremony for creating a knight, which involved bathing as one of its elements. The knights so created were known as Knights of the Bath...
, GCMG
Order of St Michael and St George
The Most Distinguished Order of Saint Michael and Saint George is an order of chivalry founded on 28 April 1818 by George, Prince Regent, later George IV of the United Kingdom, while he was acting as Prince Regent for his father, George III....
, DSO
Distinguished Service Order
The Distinguished Service Order is a military decoration of the United Kingdom, and formerly of other parts of the British Commonwealth and Empire, awarded for meritorious or distinguished service by officers of the armed forces during wartime, typically in actual combat.Instituted on 6 September...
, ADC (26 May 1858 – 12 August 1930) was a British
United Kingdom
The United Kingdom of Great Britain and Northern IrelandIn the United Kingdom and Dependencies, other languages have been officially recognised as legitimate autochthonous languages under the European Charter for Regional or Minority Languages...
soldier and commander of the British II Corps and Second Army of the BEF during World War I
World War I
World War I , which was predominantly called the World War or the Great War from its occurrence until 1939, and the First World War or World War I thereafter, was a major war centred in Europe that began on 28 July 1914 and lasted until 11 November 1918...
.
Horace Smith-Dorrien was born at Haresfoot, a house near Berkhamsted
Berkhamsted
-Climate:Berkhamsted experiences an oceanic climate similar to almost all of the United Kingdom.-Castle:...
, the 12th child of 16. He was educated at Harrow
Harrow School
Harrow School, commonly known simply as "Harrow", is an English independent school for boys situated in the town of Harrow, in north-west London.. The school is of worldwide renown. There is some evidence that there has been a school on the site since 1243 but the Harrow School we know today was...
, and on 26 February 1876 entered the Royal Military Academy Sandhurst
Royal Military Academy Sandhurst
The Royal Military Academy Sandhurst , commonly known simply as Sandhurst, is a British Army officer initial training centre located in Sandhurst, Berkshire, England...
, passing out with a commission as a subaltern to the 95th (Derbyshire) Regiment of Foot
95th (Derbyshire) Regiment of Foot
The 95th Regiment of Foot was formed when the 95th Rifles were redesignated as The Rifle Brigade . In 1881, during the Childers Reforms, it was united with the 45th Regiment of Foot to form the Sherwood Foresters .-History:...
. On 1 November 1878, he was posted to South Africa where he worked as a transport officer.