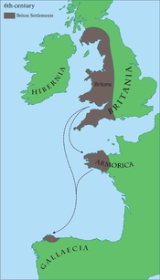 Overview
Breton is a Celtic language
Celtic languages
The Celtic languages are descended from Proto-Celtic, or "Common Celtic"; a branch of the greater Indo-European language family...
spoken in Brittany
Brittany
Brittany is a cultural and administrative region in the north-west of France. Previously a kingdom and then a duchy, Brittany was united to the Kingdom of France in 1532 as a province. Brittany has also been referred to as Less, Lesser or Little Britain...
, France
France
The French Republic , The French Republic , The French Republic , (commonly known as France , is a unitary semi-presidential republic in Western Europe with several overseas territories and islands located on other continents and in the Indian, Pacific, and Atlantic oceans. Metropolitan France...
. Breton is a Brythonic language
Brythonic languages
The Brythonic or Brittonic languages form one of the two branches of the Insular Celtic language family, the other being Goidelic. The name Brythonic was derived by Welsh Celticist John Rhys from the Welsh word Brython, meaning an indigenous Briton as opposed to an Anglo-Saxon or Gael...
, descended from the Celtic
Celtic languages
The Celtic languages are descended from Proto-Celtic, or "Common Celtic"; a branch of the greater Indo-European language family...
British language brought from Great Britain
Great Britain
Great Britain or Britain is an island situated to the northwest of Continental Europe. It is the ninth largest island in the world, and the largest European island, as well as the largest of the British Isles...
to Armorica
Armorica
Armorica or Aremorica is the name given in ancient times to the part of Gaul that includes the Brittany peninsula and the territory between the Seine and Loire rivers, extending inland to an indeterminate point and down the Atlantic coast...
by migrating Britons
Britons (historical)
The Britons were the Celtic people culturally dominating Great Britain from the Iron Age through the Early Middle Ages. They spoke the Insular Celtic language known as British or Brythonic...
during the Early Middle Ages
Early Middle Ages
The Early Middle Ages was the period of European history lasting from the 5th century to approximately 1000. The Early Middle Ages followed the decline of the Western Roman Empire and preceded the High Middle Ages...
. Like the other Brythonic languages, Welsh
Welsh language
Welsh is a member of the Brythonic branch of the Celtic languages spoken natively in Wales, by some along the Welsh border in England, and in Y Wladfa...
and Cornish
Cornish language
Cornish is a Brythonic Celtic language and a recognised minority language of the United Kingdom. Along with Welsh and Breton, it is directly descended from the ancient British language spoken throughout much of Britain before the English language came to dominate...
, it is classified as an Insular Celtic language
Insular Celtic languages
Insular Celtic languages are those Celtic languages that originated in the British Isles, in contrast to the Continental Celtic languages of mainland Europe and Anatolia. All surviving Celtic languages are from the Insular Celtic group; the Continental Celtic languages are extinct...
. Breton is most closely related to Cornish, as both are thought to have evolved from a Southwestern Brythonic protolanguage. The other regional language
Regional language
A regional language is a language spoken in an area of a nation state, whether it be a small area, a federal state or province, or some wider area....
of Brittany, Gallo
Gallo language
Gallo is a regional language of France. Gallo is a Romance language, one of the Oïl languages. It is the historic language of the region of Upper Brittany and some neighboring portions of Normandy, but today is spoken by only a small minority of the population, having been largely superseded by...
, is a Langue d'oïl derived from Latin
Latin
Latin is an Italic language originally spoken in Latium and Ancient Rome. It, along with most European languages, is a descendant of the ancient Proto-Indo-European language. Although it is considered a dead language, a number of scholars and members of the Christian clergy speak it fluently, and...
.
Breton is spoken in Lower Brittany, roughly to the west of a line linking Plouha
Plouha
Plouha is a commune in the Côtes-d'Armor department in Bretagne in northwestern France.-Population:Inhabitants of Plouha are called plouhatins.-International relations:Plouha is twinned with Killorglin located in County Kerry, Ireland....
and La Roche-Bernard
La Roche-Bernard
La Roche-Bernard is a commune in the Morbihan department of Brittany in north-western France. Inhabitants of La Roche-Bernard are called in French Rochois for men and Rochoises for women....
(east of Vannes
Vannes
Vannes is a commune in the Morbihan department in Brittany in north-western France. It was founded over 2000 years ago.-Geography:Vannes is located on the Gulf of Morbihan at the mouth of two rivers, the Marle and the Vincin. It is around 100 km northwest of Nantes and 450 km south west...
).

Can someone tell me how you would say "for Tonya" in the Breton language? Than you. Marty
More
x