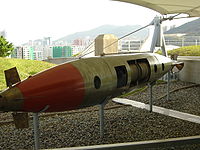 The Brennan torpedo is often claimed as the world's first guided missile, but guided torpedoes invented by John Ericsson
John Ericsson
John Ericsson was a Swedish-American inventor and mechanical engineer, as was his brother Nils Ericson. He was born at Långbanshyttan in Värmland, Sweden, but primarily came to be active in England and the United States...
, John Louis Lay
John Louis Lay
John Louis Lay was an American inventor of the spar torpedo. He was born in Buffalo, N. Y. During the War of the Rebellion he was appointed a second assistant engineer in the navy in July 1862. In 1864 he invented the torpedo with which Lieutenant Cushing sank the Confederate armor-clad ram...
, and Victor von Scheliha all predate it; however, Brennan's torpedo was much simpler in its concept and worked over an acceptable range at a satisfactory speed so it might be more accurate to call it "the world's first practical guided missile". 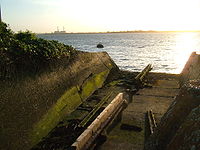 The Brennan torpedo was similar in appearance to more modern ones, apart from being having a flattened oval cross-section instead of a circular one. It was designed to run at a consistent depth of 12 feet (3.7 m), and was fitted with an indicator mast that just broke the surface of the water; at night the mast had a small light fitted which was only visible from the rear.

Two steel drums were mounted one behind the other inside the torpedo, each carrying several thousands yards of high-tensile steel wire. The drums were connected via a differential gear to twin contra-rotating
Contra-rotating
Contra-rotating, also referred to as coaxial contra-rotating, is a technique whereby parts of a mechanism rotate in opposite directions about a common axis, usually to minimise the effect of torque. Examples include some aircraft propellers, resulting in the maximum power of a single piston or...
propellers. If one drum was rotated faster than the other, then the rudder was activated. The other ends of the wires were connected to steam-powered winding engines, which were arranged so that speeds could be varied within fine limits, giving sensitive steering control for the torpedo.

The torpedo attained a speed of 20 knots (24.4 mph) using a wire 0.04 inches (1 mm) in diameter but later this was changed to 0.07 inches (1.8 mm) to increase the speed to 27 knots (32.9 mph). The torpedo was fitted with elevators controlled by a depth-keeping mechanism, and the fore and aft rudders operated by the differential between the drums.

In operation, the torpedo's operator would be positioned on a 40 feet (12.2 m) high telescopic steel tower, which could be extended hydraulically. He was provided with a special pair of binoculars on which were mounted controls which could be used to electrically control the relative speeds of the twin winding engines. In this way he was able to follow the track of the torpedo and steer it with a great degree of accuracy. In tests carried out by the Admiralty the operator was able to hit a floating object at 2000 yards (1,828.8 m) and was able to turn the torpedo through 180 degrees to hit a target from the off side.

According to Brennan's biographer, Norman Tomlinson, Brennan was inspired to create his torpedo's unique propulsion system in 1874, when he noticed that a cotton reel, if the thread is pulled toward the operator from underneath, moves forward rather than backward. He also realized that the only device which needed propulsion for a limited distance and which did not have to make a return journey, was a torpedo.

After earlier experiments with a single propeller, by 1878 Brennan had produced a working version about 15 feet (4.6 m) long, made from iron boiler plate, with twin contra-rotating propellers. Tests carried out in the Graving Dock at Williamstown, Victoria
Williamstown, Victoria
Williamstown is a suburb in Melbourne, Victoria, Australia, 8 km south-west from Melbourne's central business district. Its Local Government Area is the City of Hobsons Bay. At the 2006 Census, Williamstown had a population of 12,733....
were successful, with steering proving to be reasonably controllable, although depth-keeping was not.

The British Admiralty had meanwhile instructed Rear Admiral J. Wilson, the Commodore of the Royal Navy's Australian Squadron, to investigate the weapon and report back. Alexander Kennedy Smith
Alexander Kennedy Smith
Alexander Kennedy Smith was a Scottish/Australian engineer and former Mayor of Melbourne.-Early life:Smith was born in Cauldmill near Hawick, Roxburghshire, Scotland...
was also working to obtain the Victoria government's backing for the project and raised the subject in the state's legislature on 2 October 1877. A grant was eventually awarded for the development of the torpedo, and in March 1879 it was successfully tested in Hobsons Bay
City of Hobsons Bay
The City of Hobsons Bay is a Local Government Area in Melbourne, Victoria, Australia. It comprises the south-western suburbs between 6 and 20 km from the Melbourne city centre....
, Melbourne.

Brennan had by now established the Brennan Torpedo Company, and had assigned half of the rights on his patent to civil engineer John Ridley Temperley, in exchange for much-needed funds. Brennan and Temperley soon afterwards travelled to Britain, where the Admiralty examined the torpedo and found it unsuitable for shipboard use. However, the War Office
War Office
The War Office was a department of the British Government, responsible for the administration of the British Army between the 17th century and 1964, when its functions were transferred to the Ministry of Defence...
proved more amenable, and in early August 1881 a special Royal Engineer committee was instructed to inspect the torpedo at Chatham and report back directly to the Secretary of State for War, Hugh Childers
Hugh Childers
Hugh Culling Eardley Childers was a British and Australian Liberal statesman of the nineteenth century. He is perhaps best known for his reform efforts at the Admiralty and the War Office...
. The report strongly recommended that an improved model be built at government expense. At the time the Royal Engineers - part of the Army - were responsible for Britain's shore defenses, while the Royal Navy were responsible for its seaward protection.

In 1883 an agreement was reached between the Brennan Torpedo Company and the government. The newly appointed Inspector-General of Fortifications in England, Sir Andrew Clarke
Andrew Clarke (administrator)
Lieutenant-General Sir Andrew Clarke, GCMG, CB, CIE was a British soldier and governor as well as a politician in Australia.-Background and education:...
, appreciated the value of the torpedo and in spring 1883 an experimental station was established at Garrison Point Fort
Garrison Point Fort
Garrison Point Fort in Sheerness on the Isle of Sheppey in Kent was built on the recommendations of the Royal Commission report in the 1860s opposite Grain Fort to control the entrance to the Medway, Kent. It originally contained 36 Rifled Muzzle Loaders with calibres from 9in to 12in...
, Sheerness
Sheerness
Sheerness is a town located beside the mouth of the River Medway on the northwest corner of the Isle of Sheppey in north Kent, England. With a population of 12,000 it is the largest town on the island....
on the River Medway and a workshop for Brennan was set up at the Chatham Barracks, the home of the Royal Engineers. Between 1883 and 1885 the Royal Engineers held trials and in 1886 the torpedo was recommended for adoption as a harbour defence torpedo.

In 1884 Brennan received a letter from the War Office stating that they had decided to adopt his torpedo for harbour defence and he was invited to attend a meeting to decide the value of his invention. Brennan decided to accept £40,000 as a quick answer to his financial worries but his business partner J.R. Temperley assumed control of the negotiations and demanded £100,000. The War Office agreed to this, but said that it would have to be paid out over a period of three years. Brennan accepted this, but Temperley demanded a further £10,000 for the delay, and after some argument the War Office agreed, also agreeing to pay Brennan a sizable salary to act as production chief. A scandal eventually blew up over this sum, which was wildly extravagant in comparison to the £15,000 paid for manufacturing rights to the Whitehead torpedo only 15 years previous.

The Brennan torpedo became a standard harbour defence throughout the British Empire and was in use for more than fifteen years. Operational stations were established in the UK at Cliffe Fort, Fort Albert
Fort Albert
Fort Albert is a tower fort nestling under the cliffs west of Fort Victoria on the Isle of Wight, England. It was also known as Cliff End Fort, named after the Northern extremity of Colwell Bay .-History:...
on the Isle of Wight
Isle of Wight
The Isle of Wight is a county and the largest island of England, located in the English Channel, on average about 2–4 miles off the south coast of the county of Hampshire, separated from the mainland by a strait called the Solent...
and Plymouth
Plymouth
Plymouth is a city and unitary authority area on the coast of Devon, England, about south-west of London. It is built between the mouths of the rivers Plym to the east and Tamar to the west, where they join Plymouth Sound...
. Other stations included Fort Camden in Cork
Cork (city)
Cork is the second largest city in the Republic of Ireland and the island of Ireland's third most populous city. It is the principal city and administrative centre of County Cork and the largest city in the province of Munster. Cork has a population of 119,418, while the addition of the suburban...
, Ireland, Lei Yue Mun Fort
Hong Kong Museum of Coastal Defence
The Hong Kong Museum of Coastal Defence is a museum in Hong Kong, located in a former coastal defence fort overlooking the Lei Yue Mun channel, near Shau Kei Wan on Hong Kong Island. The fort was built by the British in 1887, intended to defend the eastern approaches to Victoria Harbour.The total...
in Hong Kong
Hong Kong
Hong Kong is one of two Special Administrative Regions of the People's Republic of China , the other being Macau. A city-state situated on China's south coast and enclosed by the Pearl River Delta and South China Sea, it is renowned for its expansive skyline and deep natural harbour...
and Forts Ricasoli & Tigne in Malta

In 1905 the Committee on Armaments of Home Ports issued a report in which they recommended the removal of all Brennan torpedoes from fixed defences due to their comparatively short range and the difficulty of launching them at night. Manufacture of the Brennan torpedo finished in 1906.