Encyclopedia
Bleeding, technically known as hemorrhaging or haemorrhaging (see American and British spelling differences) is the loss of blood
Blood
Blood is a specialized bodily fluid in animals that delivers necessary substances such as nutrients and oxygen to the cells and transports metabolic waste products away from those same cells....
or blood escape from the circulatory system
Circulatory system
The circulatory system is an organ system that passes nutrients , gases, hormones, blood cells, etc...
. Bleeding can occur internally, where blood leaks from blood vessel
Blood vessel
The blood vessels are the part of the circulatory system that transports blood throughout the body. There are three major types of blood vessels: the arteries, which carry the blood away from the heart; the capillaries, which enable the actual exchange of water and chemicals between the blood and...
s inside the body or externally, either through a natural opening such as the vagina
Vagina
The vagina is a fibromuscular tubular tract leading from the uterus to the exterior of the body in female placental mammals and marsupials, or to the cloaca in female birds, monotremes, and some reptiles. Female insects and other invertebrates also have a vagina, which is the terminal part of the...
, mouth, nose
Human nose
The visible part of the human nose is the protruding part of the face that bears the nostrils. The shape of the nose is determined by the ethmoid bone and the nasal septum, which consists mostly of cartilage and which separates the nostrils...
, ear
Ear
The ear is the organ that detects sound. It not only receives sound, but also aids in balance and body position. The ear is part of the auditory system....
or anus
Anus
The anus is an opening at the opposite end of an animal's digestive tract from the mouth. Its function is to control the expulsion of feces, unwanted semi-solid matter produced during digestion, which, depending on the type of animal, may be one or more of: matter which the animal cannot digest,...
, or through a break in the skin
Human skin
The human skin is the outer covering of the body. In humans, it is the largest organ of the integumentary system. The skin has multiple layers of ectodermal tissue and guards the underlying muscles, bones, ligaments and internal organs. Human skin is similar to that of most other mammals,...
.
Desanguination is a massive blood loss, and the complete loss of blood is referred to as exsanguination
Exsanguination
Exsanguination is the fatal process of hypovolemia , to a degree sufficient enough to cause death. One does not have to lose literally all of one's blood to cause death...
. Typically, a healthy person can endure a loss of 10–15% of the total blood volume without serious medical difficulties
Sequela
A sequela) is a pathological condition resulting from a disease, injury, or other trauma.Chronic kidney disease, for example, is sometimes a sequela of diabetes, and neck pain is a common sequela of whiplash or other trauma to the cervical vertebrae. Post-traumatic stress disorder may be a...
, and blood donation
Blood donation
A blood donation occurs when a person voluntarily has blood drawn and used for transfusions or made into medications by a process called fractionation....
typically takes 8–10% of the donor's blood volume. 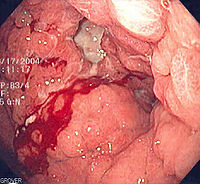 
This system is basically the same as used in the staging of hypovolemic shock
Hypovolemia
In physiology and medicine, hypovolemia is a state of decreased blood volume; more specifically, decrease in volume of blood plasma...
.

Individuals in excellent physical and cardiovascular shape may have more effective compensatory mechanisms before experiencing cardiovascular collapse. These patients may look deceptively stable, with minimal derangements in vital signs, while having poor peripheral perfusion. Elderly patients or those with chronic medical conditions may have less tolerance to blood loss, less ability to compensate, and may take medications such as betablockers that can potentially blunt the cardiovascular response. Care must be taken in the assessment of these patients.

Bleeding arises due to either traumatic injury, underlying medical condition, or a combination.

Traumatic bleeding is caused by some type of injury. There are different types of wound
Wound
A wound is a type of injury in which skin is torn, cut or punctured , or where blunt force trauma causes a contusion . In pathology, it specifically refers to a sharp injury which damages the dermis of the skin.-Open:...
s which may cause traumatic bleeding. These include:


The pattern of injury, evaluation and treatment will vary with the mechanism of the injury. Blunt trauma causes injury via a shock effect; delivering energy over an area. Wounds are often not straight and unbroken skin may hide significant injury. Penetrating trauma follows the course of the injurious device. As the energy is applied in a more focused fashion, it requires less energy to cause significant injury. Any body organ, including bone and brain, can be injured and bleed. Bleeding may not be readily apparent; internal organs such as the liver, kidney and spleen may bleed into the abdominal cavity. The only apparent signs may come with blood loss. Bleeding from a bodily orifice, such as the rectum, nose, ears may signal internal bleeding, but cannot be relied upon. Bleeding from a medical procedure
Medical procedure
A medical procedure is a course of action intended to achieve a result in the care of persons with health problems.A medical procedure with the intention of determining, measuring or diagnosing a patient condition or parameter is also called a medical test...
also falls into this category.

'Medical bleeding' denotes hemorrhage as a result of an underlying medical condition (i.e. causes of bleeding that are not directly due to trauma). Blood can escape from blood vessel
Blood vessel
The blood vessels are the part of the circulatory system that transports blood throughout the body. There are three major types of blood vessels: the arteries, which carry the blood away from the heart; the capillaries, which enable the actual exchange of water and chemicals between the blood and...
s as a result of 3 basic patterns of injury:


The underlying scientific basis for blood clotting and hemostasis is discussed in detail in the articles, Coagulation, hemostasis
Hemostasis
Hemostasis or haemostasis is a process which causes bleeding to stop, meaning to keep blood within a damaged blood vessel . Most of the time this includes blood changing from a liquid to a solid state. Intact blood vessels are central to moderating blood's tendency to clot...
and related articles. The discussion here is limited to the common practical aspects of blood clot formation which manifest as bleeding.

Certain medical conditions can also make patients susceptible to bleeding. These are conditions that affect the normal "hemostatic" functions of the body. Hemostasis
Hemostasis
Hemostasis or haemostasis is a process which causes bleeding to stop, meaning to keep blood within a damaged blood vessel . Most of the time this includes blood changing from a liquid to a solid state. Intact blood vessels are central to moderating blood's tendency to clot...
involves several components. The main components of the hemostatic system include platelets and the coagulation system.

Platelets are small blood components that form a plug in the blood vessel wall that stops bleeding. Platelets also produce a variety of substances that stimulate the production of a blood clot. One of the most common causes of increased bleeding risk is exposure to non-steroidal anti-inflammatory drugs (or "NSAIDs"). The prototype for these drugs is aspirin, which inhibits the production of thromboxane. NSAIDs inhibit the activation of platelets, and thereby increase the risk of bleeding. The effect of aspirin is irreversible; therefore, the inhibitory effect of aspirin is present until the platelets have been replaced (about ten days). Other NSAIDs, such as "ibuprofen" (Motrin) and related drugs, are reversible and therefore, the effect on platelets is not as long-lived.

There are several named coagulation factors that interact in a complex way to form blood clots, as discussed in the article on coagulation
Coagulation
Coagulation is a complex process by which blood forms clots. It is an important part of hemostasis, the cessation of blood loss from a damaged vessel, wherein a damaged blood vessel wall is covered by a platelet and fibrin-containing clot to stop bleeding and begin repair of the damaged vessel...
. Deficiencies of coagulation factors are associated with clinical bleeding. For instance, deficiency of Factor VIII causes classic Hemophilia A while deficiencies of Factor IX cause "Christmas disease"(hemophilia B). Antibodies to Factor VIII can also inactivate the Factor VII and precipitate bleeding that is very difficult to control. This is a rare condition that is most likely to occur in older patients and in those with autoimmune diseases. von Willebrand disease
Von Willebrand disease
von Willebrand disease is the most common hereditary coagulation abnormality described in humans, although it can also be acquired as a result of other medical conditions. It arises from a qualitative or quantitative deficiency of von Willebrand factor , a multimeric protein that is required for...
is another common bleeding disorder. It is caused by a deficiency of or abnormal function of the "von Willebrand" factor, which is involved in platelet activation. Deficiencies in other factors, such as factor XIII or factor VII are occasionally seen, but may not be associated with severe bleeding and are not as commonly diagnosed.

In addition to NSAID-related bleeding, another common cause of bleeding is that related to the medication, warfarin
Warfarin
Warfarin is an anticoagulant. It is most likely to be the drug popularly referred to as a "blood thinner," yet this is a misnomer, since it does not affect the thickness or viscosity of blood...
("Coumadin" and others). This medication needs to be closely monitored as the bleeding risk can be markedly increased by interactions with other medications. Warfarin acts by inhibiting the production of Vitamin K
Vitamin K
Vitamin K is a group of structurally similar, fat soluble vitamins that are needed for the posttranslational modification of certain proteins required for blood coagulation and in metabolic pathways in bone and other tissue. They are 2-methyl-1,4-naphthoquinone derivatives...
in the gut. Vitamin K is required for the production of the clotting factors, II, VII, IX, and X in the liver. One of the most common causes of warfarin-related bleeding is taking antibiotics. The gut bacteria make vitamin K and are killed by antibiotics. This decreases vitamin K levels and therefore the production of these clotting factors.