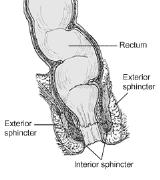 Encyclopedia
The anus is an opening at the opposite end of an animal
Animal
Animals are a major group of multicellular, eukaryotic organisms of the kingdom Animalia or Metazoa. Their body plan eventually becomes fixed as they develop, although some undergo a process of metamorphosis later on in their life. Most animals are motile, meaning they can move spontaneously and...
's digestive tract from the mouth
Mouth
The mouth is the first portion of the alimentary canal that receives food andsaliva. The oral mucosa is the mucous membrane epithelium lining the inside of the mouth....
. Its function is to control the expulsion of feces
Feces
Feces, faeces, or fæces is a waste product from an animal's digestive tract expelled through the anus or cloaca during defecation.-Etymology:...
, unwanted semi-solid matter produced during digestion, which, depending on the type of animal, may be one or more of: matter which the animal cannot digest, such as bones
Coprolite
A coprolite is fossilized animal dung. Coprolites are classified as trace fossils as opposed to body fossils, as they give evidence for the animal's behaviour rather than morphology. The name is derived from the Greek words κοπρος / kopros meaning 'dung' and λιθος / lithos meaning 'stone'. They...
; food material after all the nutrients have been extracted, for example cellulose
Cellulose
Cellulose is an organic compound with the formula , a polysaccharide consisting of a linear chain of several hundred to over ten thousand β linked D-glucose units....
or lignin
Lignin
Lignin or lignen is a complex chemical compound most commonly derived from wood, and an integral part of the secondary cell walls of plants and some algae. The term was introduced in 1819 by de Candolle and is derived from the Latin word lignum, meaning wood...
; ingested matter which would be toxic if it remained in the digestive tract; and dead or excess gut bacteria and other endosymbiont
Endosymbiont
An endosymbiont is any organism that lives within the body or cells of another organism, i.e. forming an endosymbiosis...
s.

Amphibian
Amphibian
Amphibians , are a class of vertebrate animals including animals such as toads, frogs, caecilians, and salamanders. They are characterized as non-amniote ectothermic tetrapods...
s, reptile
Reptile
Reptiles are members of a class of air-breathing, ectothermic vertebrates which are characterized by laying shelled eggs , and having skin covered in scales and/or scutes. They are tetrapods, either having four limbs or being descended from four-limbed ancestors...
s, and bird
Bird
Birds are feathered, winged, bipedal, endothermic , egg-laying, vertebrate animals. Around 10,000 living species and 188 families makes them the most speciose class of tetrapod vertebrates. They inhabit ecosystems across the globe, from the Arctic to the Antarctic. Extant birds range in size from...
s use the same orifice for excreting liquid and solid wastes, and for copulation and egg
Egg (biology)
An egg is an organic vessel in which an embryo first begins to develop. In most birds, reptiles, insects, molluscs, fish, and monotremes, an egg is the zygote, resulting from fertilization of the ovum, which is expelled from the body and permitted to develop outside the body until the developing...
-laying; this orifice is known as the cloaca
Cloaca
In zoological anatomy, a cloaca is the posterior opening that serves as the only such opening for the intestinal, reproductive, and urinary tracts of certain animal species...
. Monotreme
Monotreme
Monotremes are mammals that lay eggs instead of giving birth to live young like marsupials and placental mammals...
mammals also have a cloaca, which is thought to be a feature inherited from the earliest amniote
Amniote
The amniotes are a group of tetrapods that have a terrestrially adapted egg. They include synapsids and sauropsids , as well as their fossil ancestors. Amniote embryos, whether laid as eggs or carried by the female, are protected and aided by several extensive membranes...
s via the therapsids. Marsupial
Marsupial
Marsupials are an infraclass of mammals, characterized by giving birth to relatively undeveloped young. Close to 70% of the 334 extant species occur in Australia, New Guinea, and nearby islands, with the remaining 100 found in the Americas, primarily in South America, but with thirteen in Central...
s have two nether orifices: one for excreting both solids and liquids; the other for reproduction, which appears as a vagina
Vagina
The vagina is a fibromuscular tubular tract leading from the uterus to the exterior of the body in female placental mammals and marsupials, or to the cloaca in female birds, monotremes, and some reptiles. Female insects and other invertebrates also have a vagina, which is the terminal part of the...
in females and a penis
Penis
The penis is a biological feature of male animals including both vertebrates and invertebrates...
in males. Female placental mammals have completely separate orifices for defecation
Defecation
Defecation is the final act of digestion by which organisms eliminate solid, semisolid or liquid waste material from the digestive tract via the anus. Waves of muscular contraction known as peristalsis in the walls of the colon move fecal matter through the digestive tract towards the rectum...
, urination
Urination
Urination, also known as micturition, voiding, peeing, weeing, pissing, and more rarely, emiction, is the ejection of urine from the urinary bladder through the urethra to the outside of the body. In healthy humans the process of urination is under voluntary control...
, and reproduction; males have one opening for defecation and another for both urination and reproduction, although the channels flowing to that orifice are almost completely separate.

The development of the anus was an important stage in the evolution
Evolution
Evolution is any change across successive generations in the heritable characteristics of biological populations. Evolutionary processes give rise to diversity at every level of biological organisation, including species, individual organisms and molecules such as DNA and proteins.Life on Earth...
of multicellular animals. In fact it appears to have happened at least twice, following different paths in protostome
Protostome
Protostomia are a clade of animals. Together with the deuterostomes and a few smaller phyla, they make up the Bilateria, mostly comprising animals with bilateral symmetry and three germ layers...
s and deuterostome
Deuterostome
Deuterostomes are a superphylum of animals. They are a subtaxon of the Bilateria branch of the subregnum Eumetazoa, and are opposed to the protostomes...
s. This accompanied or facilitated other important evolutionary developments: the bilaterian body plan
Body plan
A body plan is the blueprint for the way the body of an organism is laid out. An organism's symmetry, its number of body segments and number of limbs are all aspects of its body plan...
; the coelom
Coelom
The coelom is a fluid-filled cavity formed within the mesoderm. Coeloms developed in triploblasts but were subsequently lost in several lineages. Loss of coelom is correlated with reduction in body size...
, an internal cavity that provided space for a circulatory system
Circulatory system
The circulatory system is an organ system that passes nutrients , gases, hormones, blood cells, etc...
and, in some animals, formed a hydrostatic skeleton
Hydrostatic skeleton
A hydrostatic skeleton or hydroskeleton is a structure found in many cold-blooded organisms and soft-bodied animals consisting of a fluid-filled cavity, the coelom, surrounded by muscles. The pressure of the fluid and action of the surrounding circular and longitudinal muscles are used to change an...
which enables worm-like animals to burrow; metamerism
Metamerism
Metamerism has at least three meanings:*Metamerism is the property of having repeated segments, as in annelids; a concern of zoology and developmental biology...
, in which the body was built of repeated "modules" which could later specialize, for example the heads of most arthropods are composed of fused, specialized segments.

In animals at least as complex as an earthworm
Earthworm
Earthworm is the common name for the largest members of Oligochaeta in the phylum Annelida. In classical systems they were placed in the order Opisthopora, on the basis of the male pores opening posterior to the female pores, even though the internal male segments are anterior to the female...
, the embryo
Embryo
An embryo is a multicellular diploid eukaryote in its earliest stage of development, from the time of first cell division until birth, hatching, or germination...
forms a dent on one side, the blastopore
Blastopore
A blastopore is an opening into the archenteron during the embryonic stages of an organism. The distinction between protostomes and deuterostomes is based on the direction in which the mouth develops in relation to the blastopore...
, which deepens to become the archenteron
Archenteron
The primitive gut that forms during gastrulation in the developing blastula is known as the archenteron. It develops into the digestive tract of an animal....
, the first phase in the growth of the gut
Gut (zoology)
In zoology, the gut, also known as the alimentary canal or alimentary tract, is a tube by which bilaterian animals transfer food to the digestion organs. In large bilaterians the gut generally also has an exit, the anus, by which the animal disposes of solid wastes...
. In deuterostome
Deuterostome
Deuterostomes are a superphylum of animals. They are a subtaxon of the Bilateria branch of the subregnum Eumetazoa, and are opposed to the protostomes...
s, the original dent becomes the anus while the gut eventually tunnels through to make another opening, which forms the mouth. The protostome
Protostome
Protostomia are a clade of animals. Together with the deuterostomes and a few smaller phyla, they make up the Bilateria, mostly comprising animals with bilateral symmetry and three germ layers...
s were so named because it used to be thought that in their embryos the dent formed the mouth while the anus was formed later, at the opening made by the other end of the gut. More recent research, however, shows that in protostomes the edges of the dent close up in the middle, leaving openings at the ends which become the mouth and anus.
The source of this article is wikipedia, the free encyclopedia.  The text of this article is licensed under the GFDL.