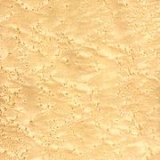 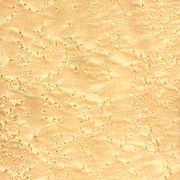 Bird's eye is a type of figure
Figure (wood)
In wood, figure refers to the appearance of wood, as seen on a longitudinal surface : a "figured wood" is not plain.The figure of a particular piece of wood is, in part, due to its grain and, in part, due to the cut, or to innate properties of the wood...
that occurs within several kinds of wood, most notably in hard maple
Hard maple
Hard maple is the wood yielded by Acer saccharum in its wider sense . It is a favorite for floors, bowling alleys and furniture. The weight per cubic metre is roughly 740kg....
. It has a distinctive pattern that resembles tiny, swirling eyes disrupting the smooth lines of grain
Wood grain
In speaking of wood the term grain refers to the alternating regions of relatively darker and lighter wood resulting from the differing growth parameters occurring in different seasons . The term is used in several ways. Perhaps most important is that in woodworking techniques...
. It is somewhat reminiscent of a burl
Burl
A burl or bur or burr is a tree growth in which the grain has grown in a deformed manner. It is commonly found in the form of a rounded outgrowth on a tree trunk or branch that is filled with small knots from dormant buds.A burl results from a tree undergoing some form of stress. It may be caused...
, but it is quite different: the small knots that make the burl are missing.

It is not known what causes the phenomenon. Research into the cultivation of bird's eye maple has so far discounted the theories that it is caused by pecking birds deforming the wood grain or that an infecting fungus makes it twist. However, no one has demonstrated a complete understanding of any combination of climate, soil, tree variety, insects, viruses or genetic mutation that may produce the effect.

Bird's eye maple is most often found in Acer saccharum (sugar maple), but millers also find bird's eye figure in red maple
Red Maple
Acer rubrum , is one of the most common and widespread deciduous trees of eastern North America. It ranges from the Lake of the Woods on the border between Ontario and Minnesota, east to Newfoundland, south to near Miami, Florida, and southwest to east Texas...
, white ash
White Ash
For another species referred to as white ash, see Eucalyptus fraxinoides.Fraxinus americana is a species of Fraxinus native to eastern North America found in mesophytic hardwood forests from Nova Scotia west to Minnesota, south to northern Florida, and southwest to eastern...
, Cuban mahogany
Mahogany
The name mahogany is used when referring to numerous varieties of dark-colored hardwood. It is a native American word originally used for the wood of the species Swietenia mahagoni, known as West Indian or Cuban mahogany....
, American beech
American Beech
Fagus grandifolia, also known as American Beech or North american beech, is a species of beech native to eastern North America, from Nova Scotia west to southern Ontario in southeastern Canada, west to Wisconsin and south to eastern Texas and northern Florida in the United States. Trees in the...
, black walnut
Black Walnut
Juglans nigra, the Eastern Black walnut, is a species of flowering tree in the hickory family, Juglandaceae, that is native to eastern North America. It grows mostly in riparian zones, from southern Ontario, west to southeast South Dakota, south to Georgia, northern Florida and southwest to central...
, and yellow birch
Yellow Birch
Betula alleghaniensis , is a species of birch native to eastern North America, from Newfoundland to Nova Scotia, New Brunswick, southern Quebec and Ontario, and the southeast corner of Manitoba in Canada, west to Minnesota, and south in the Appalachian Mountains to northern Georgia.It is a...
. Trees that grow in the Great Lakes
Great Lakes
The Great Lakes are a collection of freshwater lakes located in northeastern North America, on the Canada – United States border. Consisting of Lakes Superior, Michigan, Huron, Erie, and Ontario, they form the largest group of freshwater lakes on Earth by total surface, coming in second by volume...
region of Canada
Canada
Canada is a North American country consisting of ten provinces and three territories. Located in the northern part of the continent, it extends from the Atlantic Ocean in the east to the Pacific Ocean in the west, and northward into the Arctic Ocean...
and the United States
United States
The United States of America is a federal constitutional republic comprising fifty states and a federal district...
yield the greatest supply, along with some varieties in the Rocky Mountains
Rocky Mountains
The Rocky Mountains are a major mountain range in western North America. The Rocky Mountains stretch more than from the northernmost part of British Columbia, in western Canada, to New Mexico, in the southwestern United States...
. Although there are a few clues in a tree's bark that indicate the lumber might have bird's eye figure, it is usually necessary to fell the tree and cut it apart to know for sure.

In most characteristics, wood with bird's eye figure is no different from the rest of the wood from the same tree. Depending on the frequency of the birdseye swirls, each ⅛" to ⅜" wide (0.3–1 cm), the wood may be extremely valuable. While woodworkers prize the timber primarily for its use in veneer
Wood veneer
In woodworking, veneer refers to thin slices of wood, usually thinner than 3 mm , that are typically glued onto core panels to produce flat panels such as doors, tops and panels for cabinets, parquet floors and parts of furniture. They are also used in marquetry...
s, it also turns well on a lathe
Lathe
A lathe is a machine tool which rotates the workpiece on its axis to perform various operations such as cutting, sanding, knurling, drilling, or deformation with tools that are applied to the workpiece to create an object which has symmetry about an axis of rotation.Lathes are used in woodturning,...
, allowing it to be shaped into decorative canes, chair legs, and handles.

Bird's eye maple may be expensive, up to several times the cost of ordinary hardwood. It is used in refined specialty products, such as in automobile trim, both in solid form and veneer, boxes and bowls for jewelry, thin veneer, humidors, canes, furniture inlays, handles, guitars, bowed instruments and pool cues are popular uses. Items made with this wood tend to be more expensive not only because the wood is more costly but because it is harder to work. When working with bird's eye wood, it is advisable to take care in what tools are used, so as to prevent grain tearout. Also the more "eyes" there are in lumber, the weaker the wood tends to be.
The source of this article is wikipedia, the free encyclopedia.  The text of this article is licensed under the GFDL.