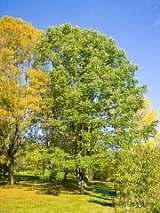 Overview
For another species referred to as white ash, see Eucalyptus fraxinoides
Eucalyptus fraxinoides
Eucalyptus fraxinoides, the White Ash is a eucalyptus tree of mountain country of south eastern New South Wales. Eucalyptus fraxinoides is a medium to large tree, usually 20 to 40 metres tall, sometimes with a leaning trunk. The trunk is marked with broad descending coppery coloured scribbles...
.
Fraxinus americana (White Ash or American Ash) is a species of Fraxinus native to eastern North America
North America
North America is a continent wholly within the Northern Hemisphere and almost wholly within the Western Hemisphere. It is also considered a northern subcontinent of the Americas...
found in mesophytic hardwood
Hardwood
Hardwood is wood from angiosperm trees . It may also be used for those trees themselves: these are usually broad-leaved; in temperate and boreal latitudes they are mostly deciduous, but in tropics and subtropics mostly evergreen.Hardwood contrasts with softwood...
forest
Forest
A forest, also referred to as a wood or the woods, is an area with a high density of trees. As with cities, depending where you are in the world, what is considered a forest may vary significantly in size and have various classification according to how and what of the forest is composed...
s from Nova Scotia
Nova Scotia
Nova Scotia is one of Canada's three Maritime provinces and is the most populous province in Atlantic Canada. The name of the province is Latin for "New Scotland," but "Nova Scotia" is the recognized, English-language name of the province. The provincial capital is Halifax. Nova Scotia is the...
west to Minnesota
Minnesota
Minnesota is a U.S. state located in the Midwestern United States. The twelfth largest state of the U.S., it is the twenty-first most populous, with 5.3 million residents. Minnesota was carved out of the eastern half of the Minnesota Territory and admitted to the Union as the thirty-second state...
, south to northern Florida
Florida
Florida is a state in the southeastern United States, located on the nation's Atlantic and Gulf coasts. It is bordered to the west by the Gulf of Mexico, to the north by Alabama and Georgia and to the east by the Atlantic Ocean. With a population of 18,801,310 as measured by the 2010 census, it...
, and southwest to eastern Texas
Texas
Texas is the second largest U.S. state by both area and population, and the largest state by area in the contiguous United States.The name, based on the Caddo word "Tejas" meaning "friends" or "allies", was applied by the Spanish to the Caddo themselves and to the region of their settlement in...
.
The name White Ash derives from the glaucous
Glaucous
Glaucous is used to describe the pale grey or bluish-green appearance of the surfaces of some plants, as well as in the names of birds, such as the Glaucous Gull , Glaucous-winged Gull , Glaucous Macaw , and Glaucous...
undersides of the leaves. It is similar in appearance to the Green Ash
Green Ash
Fraxinus pennsylvanica is a species of ash native to eastern and central North America, from Nova Scotia west to southeastern Alberta and eastern Colorado, south to northern Florida, and southwest to eastern Texas....
, making identification difficult.

IS IT COMPOUND
More
x