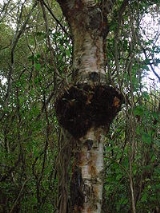 Overview
A burl or bur or burr (British English) is a tree growth in which the grain
Wood grain
In speaking of wood the term grain refers to the alternating regions of relatively darker and lighter wood resulting from the differing growth parameters occurring in different seasons . The term is used in several ways. Perhaps most important is that in woodworking techniques...
has grown in a deformed
Deformity
A deformity, dysmorphism, or dysmorphic feature is a major difference in the shape of body part or organ compared to the average shape of that part.Deformity may arise from numerous causes:*A Genetic mutation*Damage to the fetus or uterus...
manner. It is commonly found in the form of a rounded outgrowth on a tree
Tree
A tree is a perennial woody plant. It is most often defined as a woody plant that has many secondary branches supported clear of the ground on a single main stem or trunk with clear apical dominance. A minimum height specification at maturity is cited by some authors, varying from 3 m to...
trunk
Trunk (botany)
In botany, trunk refers to the main wooden axis of a tree that supports the branches and is supported by and directly attached to the roots. The trunk is covered by the bark, which is an important diagnostic feature in tree identification, and which often differs markedly from the bottom of the...
or branch
Branch
A branch or tree branch is a woody structural member connected to but not part of the central trunk of a tree...
that is filled with small knots from dormant buds.

A burl results from a tree undergoing some form of stress. It may be caused by an injury, virus or fungus. Most burls grow beneath the ground, attached to the root
Root
In vascular plants, the root is the organ of a plant that typically lies below the surface of the soil. This is not always the case, however, since a root can also be aerial or aerating . Furthermore, a stem normally occurring below ground is not exceptional either...
s as a type of malignancy
Cancer
Cancer , known medically as a malignant neoplasm, is a large group of different diseases, all involving unregulated cell growth. In cancer, cells divide and grow uncontrollably, forming malignant tumors, and invade nearby parts of the body. The cancer may also spread to more distant parts of the...
that is generally not discovered until the tree dies or falls over.

Want a burl for a gift where can i buy one