Encyclopedia
In speaking of wood
Wood
Wood is a hard, fibrous tissue found in many trees. It has been used for hundreds of thousands of years for both fuel and as a construction material. It is an organic material, a natural composite of cellulose fibers embedded in a matrix of lignin which resists compression...
the term grain refers to the alternating regions of relatively darker and lighter wood resulting from the differing growth parameters occurring in different seasons (i.e., growth rings). The term is used in several ways. Perhaps most important is that in woodworking
Woodworking
Woodworking is the process of building, making or carving something using wood.-History:Along with stone, mud, and animal parts, wood was one of the first materials worked by early humans. Microwear analysis of the Mousterian stone tools used by the Neanderthals show that many were used to work wood...
techniques (e.g. against the grain
Plane (tool)
A hand plane is a tool for shaping wood. When powered by electricity, the tool may be called a planer. Planes are used to flatten, reduce the thickness of, and impart a smooth surface to a rough piece of lumber or timber. Planing is used to produce horizontal, vertical, or inclined flat surfaces on...
). In describing the application of a woodworking technique to a given piece of wood, the direction of the technique may be:

Grain alignment must be considered when joining
Woodworking joints
Joinery is a part of woodworking that involves joining together pieces of wood, to create furniture, structures, toys, and other items. Some wood joints employ fasteners, bindings, or adhesives, while others use only wood elements. The characteristics of wooden joints - strength, flexibility,...
pieces of wood, or designing wooden structures. For example, a stressed span is less likely to fail if tension is applied along the grain, rather than across the grain. Grain direction will also affect the type of warping seen in the finished item.

In describing the alignment of the wood in the tree a distinction may be made. Basic grain descriptions and types include: 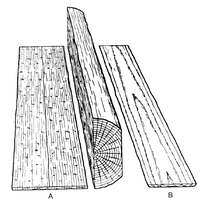 In addition, there are a few special grain alignments. Their rarity often promotes the value of both the raw material, and the finished work it becomes a part of. These include:


In a wider sense, the term grain may also be applied to the orientation of the cut, the way a given piece of wood has been sawn:

Strictly speaking, grain is not the same as the "figure
Figure (wood)
In wood, figure refers to the appearance of wood, as seen on a longitudinal surface : a "figured wood" is not plain.The figure of a particular piece of wood is, in part, due to its grain and, in part, due to the cut, or to innate properties of the wood...
" of wood.