Encyclopedia
The botanical definition of a berry is a fleshy fruit
Fruit
In broad terms, a fruit is a structure of a plant that contains its seeds.The term has different meanings dependent on context. In non-technical usage, such as food preparation, fruit normally means the fleshy seed-associated structures of certain plants that are sweet and edible in the raw state,...
produced from a single ovary. Grape
Grape
A grape is a non-climacteric fruit, specifically a berry, that grows on the perennial and deciduous woody vines of the genus Vitis. Grapes can be eaten raw or they can be used for making jam, juice, jelly, vinegar, wine, grape seed extracts, raisins, molasses and grape seed oil. Grapes are also...
s are an example. The berry is the most common type of fleshy fruit in which the entire ovary wall ripens into an edible pericarp. They may have one or more carpels with a thin covering and fleshy interiors. The seeds are usually embedded in the flesh of the ovary. A plant that bears berries is said to be bacciferous. Many species of plants produce fruit that are similar to berries, but not actually berries, and these are said to be baccate.

In everyday English, "berry" is a term for any small edible fruit. These "berries" are usually juicy, round or semi-oblong, brightly coloured, sweet or sour, and do not have a stone or pit, although many seeds may be present.

Many berries, such as the tomato
Tomato
The word "tomato" may refer to the plant or the edible, typically red, fruit which it bears. Originating in South America, the tomato was spread around the world following the Spanish colonization of the Americas, and its many varieties are now widely grown, often in greenhouses in cooler...
, are edible, but others in the same family, such as the fruits of the deadly nightshade (Atropa belladonna) and the fruits of the potato
Potato
The potato is a starchy, tuberous crop from the perennial Solanum tuberosum of the Solanaceae family . The word potato may refer to the plant itself as well as the edible tuber. In the region of the Andes, there are some other closely related cultivated potato species...
(Solanum tuberosum) are poisonous
Poison
In the context of biology, poisons are substances that can cause disturbances to organisms, usually by chemical reaction or other activity on the molecular scale, when a sufficient quantity is absorbed by an organism....
to humans. Some berries, such as Capsicum
Capsicum
Capsicum is a genus of flowering plants in the nightshade family, Solanaceae. Its species are native to the Americas where they have been cultivated for thousands of years, but they are now also cultivated worldwide, used as spices, vegetables, and medicines - and have become are a key element in...
, have space rather than pulp around their seeds.

In botanical
Botany
Botany, plant science, or plant biology is a branch of biology that involves the scientific study of plant life. Traditionally, botany also included the study of fungi, algae and viruses...
language, a berry is a simple fruit having seed
Seed
A seed is a small embryonic plant enclosed in a covering called the seed coat, usually with some stored food. It is the product of the ripened ovule of gymnosperm and angiosperm plants which occurs after fertilization and some growth within the mother plant...
s and pulp produced from a single ovary
Ovary (plants)
In the flowering plants, an ovary is a part of the female reproductive organ of the flower or gynoecium. Specifically, it is the part of the pistil which holds the ovule and is located above or below or at the point of connection with the base of the petals and sepals...
; the ovary can be inferior or superior.

Examples of botanical berries include:

The fruit of citrus
Citrus
Citrus is a common term and genus of flowering plants in the rue family, Rutaceae. Citrus is believed to have originated in the part of Southeast Asia bordered by Northeastern India, Myanmar and the Yunnan province of China...
, such as the orange
Orange (fruit)
An orange—specifically, the sweet orange—is the citrus Citrus × sinensis and its fruit. It is the most commonly grown tree fruit in the world....
, kumquat
Kumquat
Cumquats or kumquats are a group of small fruit-bearing trees in the flowering plant family Rutaceae, either forming the genus Fortunella, or placed within Citrus sensu lato...
and lemon
Lemon
The lemon is both a small evergreen tree native to Asia, and the tree's ellipsoidal yellow fruit. The fruit is used for culinary and non-culinary purposes throughout the world – primarily for its juice, though the pulp and rind are also used, mainly in cooking and baking...
, is a berry with a thick rind and a very juicy interior that is given the special name hesperidium
Hesperidium
A hesperidium is a modified fruit with a tough, leathery rind. The peel contains volatile oil glands in pits. The fleshy interior is composed of separate sections, called carpels, filled with fluid-filled vesicles that are actually specialized hair cells.The outer ovary wall becomes the thick...
.

Berries which develop from an inferior ovary are sometimes termed epigynous berries or false berries, as opposed to true berries which develop from a superior ovary. In so-called epigynous berries, the berry includes tissue derived from parts of the flower besides the ovary. The floral tube, formed from the basal part of the sepals, petals and stamens can become fleshy at maturity and is united with the ovary to form the fruit. Common fruits that are sometimes classified as epigynous berries include bananas, members of the genus Vaccinium (e.g., cranberries and blueberries), and members of the family Cucurbitaceae
Cucurbitaceae
The plant family Cucurbitaceae consists of various squashes, melons, and gourds, including crops such as cucumber, pumpkins, luffas, and watermelons...
(e.g., cucumbers, melons and squash).


Not a botanical berry

Many fruits commonly referred to as berries are not actual berries by the scientific definition, but fall into one of these categories:

Drupe
Drupe
In botany, a drupe is a fruit in which an outer fleshy part surrounds a shell of hardened endocarp with a seed inside. These fruits develop from a single carpel, and mostly from flowers with superior ovaries...
s are fleshy fruits produced from a (usually) single-seeded ovary with a hard stony layer (called the endocarp) surrounding the seed.
Other drupe-like fruits with a single seed, that lack the stony endocarp include:

The pome
Pome
In botany, a pome is a type of fruit produced by flowering plants in the subfamily Maloideae of the family Rosaceae.A pome is an accessory fruit composed of one or more carpels surrounded by accessory tissue...
fruits produced by plants in subtribe Pyrinae of family Rosaceae
Rosaceae
Rosaceae are a medium-sized family of flowering plants, including about 2830 species in 95 genera. The name is derived from the type genus Rosa. Among the largest genera are Alchemilla , Sorbus , Crataegus , Cotoneaster , and Rubus...
, such as apples and pears, have a structure (the core) that clearly separates the seeds from the ovary tissue. However, some of the smaller pomes are sometimes referred to as berries. Bright red haws from Crataegus
Crataegus
Crataegus , commonly called hawthorn or thornapple, is a large genus of shrubs and trees in the rose family, Rosaceae, native to temperate regions of the Northern Hemisphere in Europe, Asia and North America. The name hawthorn was originally applied to the species native to northern Europe,...
are sometimes called hawberries. Amelanchier pomes become so soft at maturity that they resemble a blueberry
Blueberry
Blueberries are flowering plants of the genus Vaccinium with dark-blue berries and are perennial...
and are known as Juneberries or Saskatoon berries. 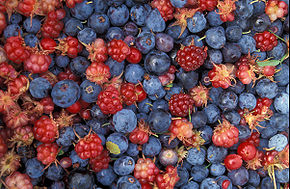 In accessory fruit
Accessory fruit
An accessory fruit is a fruit in which some of the flesh is derived not from the ovary but from some adjacent tissue exterior to the carpel. Examples of accessory tissue are the receptacle of strawberries, figs, or mulberries, and the calyx of Gaultheria procumbens or Syzygium jambos...
s, the edible part is not generated by the ovary. Berry-like examples include:

By contrasting in color with their background, berries are more attractive to animals that eat them, and they therefore aid in the dispersal
Biological dispersal
Biological dispersal refers to species movement away from an existing population or away from the parent organism. Through simply moving from one habitat patch to another, the dispersal of an individual has consequences not only for individual fitness, but also for population dynamics, population...
of the plants' seeds.

Berry colors are due to natural plant pigments, many of which are polyphenols, such as the flavonoid
Flavonoid
Flavonoids , are a class of plant secondary metabolites....
s, anthocyanin
Anthocyanin
Anthocyanins are water-soluble vacuolar pigments that may appear red, purple, or blue according to pH...
s, and tannins, localized mainly in berry skin
Skin
-Dermis:The dermis is the layer of skin beneath the epidermis that consists of connective tissue and cushions the body from stress and strain. The dermis is tightly connected to the epidermis by a basement membrane. It also harbors many Mechanoreceptors that provide the sense of touch and heat...
s and seed
Seed
A seed is a small embryonic plant enclosed in a covering called the seed coat, usually with some stored food. It is the product of the ripened ovule of gymnosperm and angiosperm plants which occurs after fertilization and some growth within the mother plant...
s. Berry pigments are usually antioxidant
Antioxidant
An antioxidant is a molecule capable of inhibiting the oxidation of other molecules. Oxidation is a chemical reaction that transfers electrons or hydrogen from a substance to an oxidizing agent. Oxidation reactions can produce free radicals. In turn, these radicals can start chain reactions. When...
s in vitro
In vitro
In vitro refers to studies in experimental biology that are conducted using components of an organism that have been isolated from their usual biological context in order to permit a more detailed or more convenient analysis than can be done with whole organisms. Colloquially, these experiments...
and thus have oxygen radical absorbance capacity
Oxygen radical absorbance capacity
Oxygen Radical Absorbance Capacity is a method of measuring antioxidant capacities in biological samples in vitro.A wide variety of foods has been tested using this method, with certain spices, berries and legumes rated highly. There exists no physiological proof in vivo that free-radical theory...
(ORAC) that is high among plant foods. Together with good nutrient content, ORAC derived in the laboratory distinguishes several berries within a new category of functional foods called "superfruit
Superfruit
Superfruit, a marketing term first used in the food and beverage industry in 2005, refers to a fruit which combines exceptional nutrient richness and antioxidant quality with appealing taste that can stimulate and retain loyalty for consumer products. "Superfruit" has not official U.S. Food and...
s". However, there is no physiological evidence established to date that berry polyphenols have actual antioxidant value within the human body, and it remains invalid to claim polyphenols have antioxidant health value on product labels in the United States and Europe.