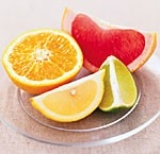 A hesperidium is a modified fruit
Fruit
In broad terms, a fruit is a structure of a plant that contains its seeds.The term has different meanings dependent on context. In non-technical usage, such as food preparation, fruit normally means the fleshy seed-associated structures of certain plants that are sweet and edible in the raw state,...
with a tough, leathery rind. The peel contains volatile oil glands in pits. The fleshy interior is composed of separate sections, called carpels
Gynoecium
Gynoecium is most commonly used as a collective term for all carpels in a flower. A carpel is the ovule and seed producing reproductive organ in flowering plants. Carpels are derived from ovule-bearing leaves which evolved to form a closed structure containing the ovules...
, filled with fluid-filled vesicles that are actually specialized hair cells.

Oranges
Orange (fruit)
An orange—specifically, the sweet orange—is the citrus Citrus × sinensis and its fruit. It is the most commonly grown tree fruit in the world....
and other citrus
Citrus
Citrus is a common term and genus of flowering plants in the rue family, Rutaceae. Citrus is believed to have originated in the part of Southeast Asia bordered by Northeastern India, Myanmar and the Yunnan province of China...
fruits are common examples.

Unlike most other berries
Berry
The botanical definition of a berry is a fleshy fruit produced from a single ovary. Grapes are an example. The berry is the most common type of fleshy fruit in which the entire ovary wall ripens into an edible pericarp. They may have one or more carpels with a thin covering and fleshy interiors....
, the rind
Rind
Rind may refer to:*Peel *Pork rind*Rind , a giantess in Norse mythology*Rind, Armenia, also Rrind*Rind et al. controversy, about a study on child sexual abuse*Rind , a tribe in Baluchistan...
of hesperidia is generally not eaten with the fruit because it is tough and bitter. A common exception is the kumquat
Kumquat
Cumquats or kumquats are a group of small fruit-bearing trees in the flowering plant family Rutaceae, either forming the genus Fortunella, or placed within Citrus sensu lato...
, which is consumed entirely.

The outermost, pigmented layer of rind contains essential oil
Essential oil
An essential oil is a concentrated hydrophobic liquid containing volatile aroma compounds from plants. Essential oils are also known as volatile oils, ethereal oils or aetherolea, or simply as the "oil of" the plant from which they were extracted, such as oil of clove...
s and is known as the flavedo. When scraped off and used as a culinary ingredient it is called zest
Zest (ingredient)
Zest is a food ingredient that is prepared by scraping or cutting from the outer, colorful skin of citrus fruits such as lemon, orange, citron, and lime. Zest is used to add flavor to foods....
. The inner rind (known as pith
Pith
Pith, or medulla, is a tissue in the stems of vascular plants. Pith is composed of soft, spongy parenchyma cells, which store and transport nutrients throughout the plant. In eudicots, pith is located in the center of the stem. In monocots, it extends also into flowering stems and roots...
or albedo) of the citron
Citron
Not to be confused with Cintron.The citron is a fragrant citrus fruit, botanically classified as Citrus medica by both the Swingle and Tanaka systems...
or lemon
Lemon
The lemon is both a small evergreen tree native to Asia, and the tree's ellipsoidal yellow fruit. The fruit is used for culinary and non-culinary purposes throughout the world – primarily for its juice, though the pulp and rind are also used, mainly in cooking and baking...
is candied in sugar
Sugar
Sugar is a class of edible crystalline carbohydrates, mainly sucrose, lactose, and fructose, characterized by a sweet flavor.Sucrose in its refined form primarily comes from sugar cane and sugar beet...
and called succade
Succade
Succade is the candied peel of any of the citrus species, especially from the citron or Citrus medica which is distinct with its extra thick peel; in addition, the taste of the inner rind of the citron is less bitter than those of the other citrus...
.
The source of this article is wikipedia, the free encyclopedia.  The text of this article is licensed under the GFDL.