In the flowering plant
Flowering plant
The flowering plants , also known as Angiospermae or Magnoliophyta, are the most diverse group of land plants. Angiosperms are seed-producing plants like the gymnosperms and can be distinguished from the gymnosperms by a series of synapomorphies...
s, an ovary is a part of the female reproductive organ of the flower or gynoecium
Gynoecium
Gynoecium is most commonly used as a collective term for all carpels in a flower. A carpel is the ovule and seed producing reproductive organ in flowering plants. Carpels are derived from ovule-bearing leaves which evolved to form a closed structure containing the ovules...
. Specifically, it is the part of the pistil which holds the ovule
Ovule
Ovule means "small egg". In seed plants, the ovule is the structure that gives rise to and contains the female reproductive cells. It consists of three parts: The integument forming its outer layer, the nucellus , and the megaspore-derived female gametophyte in its center...
(s) and is located above or below or at the point of connection with the base of the petals and sepals. The pistil may be made up of one carpel or of several fused carpels, and therefore the ovary can contain part of one carpel or parts of several fused carpels. In this picture of a zucchini
Zucchini
The zucchini is a summer squash which often grows to nearly a meter in length, but which is usually harvested at half that size or less. It is a hybrid of the cucumber. Along with certain other squashes, it belongs to the species Cucurbita pepo. Zucchini can be dark or light green...
the petals and sepals are above the ovary and such a flower is said to have an inferior ovary; also referred to as epigynous. Above the ovary is the style and the stigma, which is where the pollen
Pollen
Pollen is a fine to coarse powder containing the microgametophytes of seed plants, which produce the male gametes . Pollen grains have a hard coat that protects the sperm cells during the process of their movement from the stamens to the pistil of flowering plants or from the male cone to the...
lands and germinates to grow down through the style to the ovary, and, for each individual pollen grain, to grow into one individual ovule. Some wind pollinated flowers have much reduced and modified ovaries.

A fruit
Fruit
In broad terms, a fruit is a structure of a plant that contains its seeds.The term has different meanings dependent on context. In non-technical usage, such as food preparation, fruit normally means the fleshy seed-associated structures of certain plants that are sweet and edible in the raw state,...
is the ripened ovary or ovaries—together with seed
Seed
A seed is a small embryonic plant enclosed in a covering called the seed coat, usually with some stored food. It is the product of the ripened ovule of gymnosperm and angiosperm plants which occurs after fertilization and some growth within the mother plant...
s—from one or more flowers. The fruits of a plant are responsible for dispersing the seeds that contain the embryo and protecting the seeds as well. In many species, the fruit incorporates some surrounding tissues, or is dispersed with some non-fruit tissues.


Classification based on position 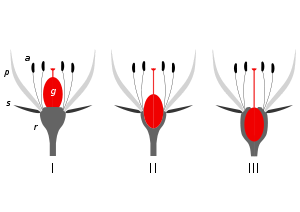 The terminology of the positions of ovaries is determined by the insertion point, where the other floral parts (perianth
Perianth
The term perianth has two similar but separate meanings in botany:* In flowering plants, the perianth are the outer, sterile whorls of a flower...
and androecium) come together and attach to the surface of the ovary. If the ovary is situated above the insertion point, it is superior; if below, inferior.

A superior ovary is an ovary attached to the receptacle above the attachment of other floral parts. A superior ovary is found in types of fleshy fruits such as true berries
Berry
The botanical definition of a berry is a fleshy fruit produced from a single ovary. Grapes are an example. The berry is the most common type of fleshy fruit in which the entire ovary wall ripens into an edible pericarp. They may have one or more carpels with a thin covering and fleshy interiors....
, drupe
Drupe
In botany, a drupe is a fruit in which an outer fleshy part surrounds a shell of hardened endocarp with a seed inside. These fruits develop from a single carpel, and mostly from flowers with superior ovaries...
s, etc. A flower with this arrangement is described as hypogynous. An example is Hypericum calycinum
Hypericum calycinum
Hypericum calycinum is a prostrate or low-growing shrub species of the genus Hypericum . Widely cultivated for its large yellow flowers, its names as a garden plant include Rose of Sharon in Britain and Australia, and Aaron's beard, Great St-John's wort, and Jerusalem star.Grown in Mediterranean...
.

An ovary becomes superior during anthesis (flower formation) when the upper portion of the ovary grows more than the lower part.

An inferior ovary lies below the attachment of other floral parts. A pome
Pome
In botany, a pome is a type of fruit produced by flowering plants in the subfamily Maloideae of the family Rosaceae.A pome is an accessory fruit composed of one or more carpels surrounded by accessory tissue...
is a type of fleshy fruit that is often cited as an example, but close inspection of some pomes (such as Pyracantha
Pyracantha
Pyracantha is a genus of thorny evergreen large shrubs in the family Rosaceae, with common names Firethorn or Pyracantha. They are native to an area extending from Southeast Europe east to Southeast Asia, resemble and are related to Cotoneaster, but have serrated leaf margins and numerous thorns...
) will show that it is really a half-inferior ovary.
Flowers with inferior ovaries are termed epigynous. Some examples of flowers with an inferior ovary are orchids (inferior capsule), Fuchsia
Fuchsia
Fuchsia is a genus of flowering plants that consists mostly of shrubs or small trees. The first, Fuchsia triphylla, was discovered on the Caribbean island of Hispaniola in 1703 by the French Minim monk and botanist, Charles Plumier...
(inferior berry), Asteraceae
Asteraceae
The Asteraceae or Compositae , is an exceedingly large and widespread family of vascular plants. The group has more than 22,750 currently accepted species, spread across 1620 genera and 12 subfamilies...
(inferior achene-like fruit, called a cypsela).

A half-inferior ovary (also known as “half-superior”, “subinferior,” or “partially inferior,”) is embedded or surrounded by the receptacle.
This occurs in flowers of the Lythraceae
Lythraceae
Lythraceae are a family of flowering plants. It includes about 620 species of mostly herbs, with some shrubs and trees, in 31 genera. Major genera include Cuphea , Lagerstroemia , Nesaea , Rotala , and Lythrum...
family, which includes the Crape Myrtles. Such flowers are termed perigynous or half-epigynous. In some classifications, half-inferior ovaries are not recognized and are instead grouped with either the superior or inferior ovaries.