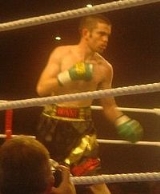 Encyclopedia
Bernard Dunne is a retired Irish
Ireland
Ireland is an island to the northwest of continental Europe. It is the third-largest island in Europe and the twentieth-largest island on Earth...
professional boxer and a former WBA
World Boxing Association
The World Boxing Association is a boxing organization that sanctions official matches, and awards the WBA world championship title at the professional level. It was previously known as the National Boxing Association before changing its name in 1962...
, and European
European Boxing Union
The European Boxing Union is an organization that oversees competition in that sport over the continent of Europe.-History:The EBU started life as the International Boxing Union in Paris in 1910...
super bantamweight
Super Bantamweight
Super bantamweight is a weight division in professional boxing. The maximum weight for this division is 122 pounds, or roughly 55.34 kilograms....
champion.

On Saturday 21 March 2009, Dunne waged the war that he would be best remembered for and defeated Ricardo Cordoba in the 11th round to become the WBA super bantamweight champion in a fight that won ESPN's 2009 Fight of The Year with 6 knockdowns occurring in the fight between the two fighters (4 for Dunne and 2 for Cordoba). Dunne lost his title on 26 September 2009 in the 02 Dublin. Dunne retired on 19 February 2010.

Dunne was born in Neilstown, Clondalkin
Clondalkin
-Today:Modern Clondalkin is a busy satellite town of Dublin, with a population of 43,929 in 2006. Retail facilities include Tesco Ireland- and Dunnes Stores-led shopping centres, and Aldi and Lidl stores on the Fonthill Road and New Nangor Road respectively, and the village centre is a base for...
, County Dublin
County Dublin
County Dublin is a county in Ireland. It is part of the Dublin Region and is also located in the province of Leinster. It is named after the city of Dublin which is the capital of Ireland. County Dublin was one of the first of the parts of Ireland to be shired by King John of England following the...
, Ireland
Republic of Ireland
Ireland , described as the Republic of Ireland , is a sovereign state in Europe occupying approximately five-sixths of the island of the same name. Its capital is Dublin. Ireland, which had a population of 4.58 million in 2011, is a constitutional republic governed as a parliamentary democracy,...
). He boxed at amateur level for Ireland
Irish Amateur Boxing Association
The Irish Amateur Boxing Association is the governing body of amateur boxing in Ireland. It was founded in 1911 following a meeting in Dublin.-Structure:...
where he had a record of 119-11, captured 13 Irish titles but did not qualify for the 2000 Summer Olympics
2000 Summer Olympics
The Sydney 2000 Summer Olympic Games or the Millennium Games/Games of the New Millennium, officially known as the Games of the XXVII Olympiad, were an international multi-sport event which was celebrated between 15 September and 1 October 2000 in Sydney, New South Wales, Australia...
in Sydney, Australia.

Dunne was also never beaten by an Irishman in his amateur career. 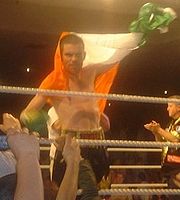 Dunne began his professional boxing career in December 2001 in the United States, winning his first fight in Feather Falls Casino in Oroville, California
Oroville, California
Oroville is the county seat of Butte County, California. The population was 15,506 at the 2010 census, up from 13,004 at the 2000 census...
. In LA, Bernard trained under the world-renowned boxing coach Freddie Roach in the Wild Card Boxing Gym, training with many champions including Manny Pacquiao
Manny Pacquiao
Emmanuel "Manny" Dapidran Pacquiao, PLH is a Filipino professional boxer and politician. He is the first eight-division world champion; having won six world titles, as well as the first to win the lineal championship in four different weight classes. He was named "Fighter of the Decade" for the...
. Dunne won his first fourteen bouts in the United States before returning to Dublin under manager Brian Peters. Peters negotiated a deal with Irish public broadcaster RTÉ whereby Dunne's fights in Dublin would be shown live on national television. It was the first such deal for an Irish boxer.

Dunne won the lowly regarded IBC super bantamweight title by beating Sean Hughes
Sean Hughes
Sean Hughes may refer to:* Sean Hughes * Sean Hughes , alleged IRA member* Sean Hughes , British Labour Party Member of Parliament 1983–1990* Sean Hughes of Green Day...
in the National Stadium in Dublin. Dunne won the European Super bantamweight title on 11 November 2006 beating Esham Pickering
Esham Pickering
Esham Pickering is a British professional boxer who competes in the super bantamweight and featherweight divisions. He is a former British, Commonwealth and European champion and former World title challenger.-Early career:...
on points in his home town of Dublin. In March 2007 he defended the title by technical knock-out over Yersin Jailauov in the third round, in a mandatory EBU title defense. He followed that streak in June 2007, when he defended his EBU title, defeating Walstad Reider by unanimous decision.

On 25 August 2007, Dunne was defeated by Kiko Martinez
Kiko Martinez
Francisco Martinez Sanchez more commonly known as Kiko Martinez is a professional boxer from Alicante, Spain, who fights in the super bantamweight division. From April 15, 2011, he is the current EBU Super bantamweight champion .-Amateur career:Martinez fought extensively as an amateur...
. The referee stopped the fight in the 1st round before many of the spectators had found their seats - Dunne having been knocked down twice in that time - causing Dunne to lose the European super bantamweight title. Dunne had next been scheduled to fight Marcos Jimenez 13-1 (8 KO) of the Dominican Republic
Dominican Republic
The Dominican Republic is a nation on the island of La Hispaniola, part of the Greater Antilles archipelago in the Caribbean region. The western third of the island is occupied by the nation of Haiti, making Hispaniola one of two Caribbean islands that are shared by two countries...
at the National Stadium on 12 July 2008. However, his opponent pulled out of the fight. His replacement was Damian David Marchiano 15-4-1 (5 KO) of Argentina
Argentina
Argentina , officially the Argentine Republic , is the second largest country in South America by land area, after Brazil. It is constituted as a federation of 23 provinces and an autonomous city, Buenos Aires...
. Marchiano came into the bout on the back of an unsuccessful attempt at taking Silence Mabuza
Silence Mabuza
Silence Mabuza is a professional boxer in the bantamweight division, and as of Jan. 6, 2008, is a former two time holder of the International Boxing Organization's world Bantamweight title....
's IBO Bantamweight title. Dunne won the 10 round bout on points.

On the March 21, 2009 Dunne faced off against Panamanian WBA Super Bantamweight world champion Ricardo Cordoba
Ricardo Cordoba
Ricardo Alberto Cordoba Mosque, more commonly known as Ricardo Cordoba, is a Panamanian professional boxer who fights in the super bantamweight division.-Professional career:...
in the O2 Arena
O2 arena
O2 Arena may refer to:*The O2 Arena the arena within the O2 in London.*The O2 , an entertainment complex built within the former Millennium Dome, North Greenwich, that contains the arena.*O2 World in Berlin*O2 World in Hamburg...
, Dublin. This was the first world boxing championship fight in Dublin for 13 years and would win ESPN's Fight of the Year. Dunne went on to win in a thrilling fight knocking Cordoba out in the 11th round marking the end to a historic day for Irish sports as the international rugby team had won a Six Nations Grand Slam earlier in the day. Jimmy Magee
Jimmy Magee
Jimmy Magee is a longstanding Irish sports broadcaster. Known as 'the Memory Man', he has spent over half a century in sports broadcasting...
pointed out that 61 years ago Ireland won a Six Nations Grand Slam and a Boxing World Title on the same day. On the 10 April 2009 Dunne was crowned boxer of the month for March by the World Boxing Association.
In May 2009, Dunne was offered £200,000 by promoter Frank Maloney
Frank Maloney
Frank Maloney is a boxing manager and promoter and United Kingdom Independence Party politician. He is most famous for managing Lennox Lewis to the Undisputed Heavyweight Championship of the World.-Early life:...
to defend his world title against Commonwealth Super-Bantamweight holder Rendall Munroe
Rendall Munroe
Rendall Munroe is an English super bantamweight boxer. Munroe currently resides in Leicester and is the WBA International Super Bantamweight champion. He is also a former holder of the EBU and Commonwealth Super Bantamweight titles. His dayjob as a binman is well publicised as his nickname is 'The...
, but dunne says no. On 20 August 2009, it was confirmed that Dunne would make the first defence of his World title at The O2 Arena, Dublin on 26 September 2009 against the number one rated contender Poonsawat Kratingdaenggym
Poonsawat Kratingdaenggym
Chalermwong Udomna , who boxes as Poonsawat Kratingdaenggym, is a professional boxer from Thailand who fights in the super bantamweight division...
. Dunne subsequently lost his belt to Poonsawat by way of the WBA three knockdown rule in the third round of the fight.

In late January 2010 Dunne was named Boxer of the Year at the Irish National Boxing Awards. Three weeks later on 19 February he announced his retirement from the sport.

| 33-1-2
|O2 Arena
The O2, Dublin
The O2 is a 14,000-seat amphitheatre located at North Wall Quay in the Dublin Docklands in Dublin, Ireland, which opened on 16 December 2008. The venue is jointly owned by Live Nation and Harry Crosbie with Live Nation in charge of programme booking and operating the venue...
, Dublin, Ireland
Republic of Ireland
Ireland , described as the Republic of Ireland , is a sovereign state in Europe occupying approximately five-sixths of the island of the same name. Its capital is Dublin. Ireland, which had a population of 4.58 million in 2011, is a constitutional republic governed as a parliamentary democracy,...