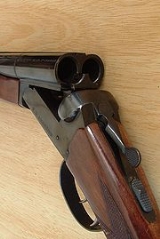 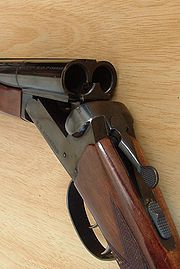 In firearms terminology, an action is the physical mechanism that manipulates cartridge
Cartridge (firearms)
A cartridge, also called a round, packages the bullet, gunpowder and primer into a single metallic case precisely made to fit the firing chamber of a firearm. The primer is a small charge of impact-sensitive chemical that may be located at the center of the case head or at its rim . Electrically...
s and/or seals the breech
Breech-loading weapon
A breech-loading weapon is a firearm in which the cartridge or shell is inserted or loaded into a chamber integral to the rear portion of a barrel....
. The term is also used to describe the method in which cartridges are loaded, locked, and extracted from the mechanism. Actions are generally categorized by the type of mechanism used. A firearm action is technically not present on muzzleloader
Muzzleloader
A muzzleloader is any firearm into which the projectile and usually the propellant charge is loaded from the muzzle of the gun . This is distinct from the more popular modern designs of breech-loading firearms...
s as all loading is done by hand. The mechanism that fires a muzzle-loader is called the lock.

Manual operation is a firearms term describing any type of firearm action that is loaded one shot at a time by the user rather than automatically. For example, break action is a form of manual operation using a simple hinge mechanism that is manually unlatched by the operator exposing the chamber(s) for reloading.

These are actions wherein the breechblock
Breechblock
A breechblock is the part of the firearm action that closes the breech of a weapon at the moment of firing....
lowers or "drops" into the receiver to open the breech, usually actuated by an underlever. There are two principal types of dropping block: the tilting block and the falling block.

The original Peabody rifles, manufactured by the Providence Tool Company, used a manually cocked side-hammer. Swiss gunsmith Friedrich Martini developed a pivoting block action by modifying the Peabody, that incorporated a hammerless striker which was cocked by the operating lever with the same single, efficient motion that also pivoted the block. The 1871 Martini-Henry
Martini-Henry
The Martini-Henry was a breech-loading single-shot lever-actuated rifle adopted by the British, combining an action worked on by Friedrich von Martini , with the rifled barrel designed by Scotsman Alexander Henry...
which replaced the "trapdoor" Snider-Enfield
Snider-Enfield
The British .577 Snider-Enfield was a type of breech loading rifle. The firearm action was invented by the American Jacob Snider, and the Snider-Enfield was one of the most widely used of the Snider varieties. It was adopted by British Army as a conversion system for its ubiquitous Pattern 1853...
was the standard British Army rifle of the later Victorian era, and the Martini was also a popular action for civilian rifles.

Charles H. Ballard's self-cocking tilting-block action was produced by the Marlin Firearms Company from 1875, and earned a superlative reputation among long-range "Creedmoor" target shooters. Surviving Marlin Ballards are today highly prized by collectors, especially those mounted in the elaborate Swiss-style Schützen stocks of the day.

A falling-block action (also known as a sliding-block action) is a single-shot firearm action in which a solid metal breechblock slides vertically in grooves cut into the breech of the weapon and actuated by a lever. Examples of firearms using the falling block action are the Sharps rifle
Sharps Rifle
Sharps rifles were those of a series begun with a design by Christian Sharps. Sharps rifles were renowned for long range and high accuracy in their day.-History:Sharps's initial rifle was patented September 17, 1848 and manufactured by A. S...
and Ruger No. 1
Ruger No. 1
The Ruger No. 1 is a single shot rifle, with Farquharson-style internal hammer falling block action, manufactured by Sturm, Ruger. It was introduced in 1967. An underlever lowers the block allowing loading and cocks the rifle. A falling block action is an inherently strong design, and the Ruger...
.

In a rolling block action the breechblock takes the form of a part-cylinder, with a pivot pin through its axis. The operator rotates or "rolls" the block to open and close the breech; it is a simple, rugged and reliable design. Rolling blocks are most often associated with firearms made by Remington
E. Remington and Sons
E. Remington and Sons was a manufacturer of firearms and typewriters. Founded in 1816 by Eliphalet Remington in Ilion, New York, on March 1, 1873 it started manufacturing the first commercial typewriter.-Becoming "E. Remington & Sons":...
in the later 19th century; in the Remington action the hammer serves to lock the breech closed at the moment of firing, and the block in turn prevents the hammer from falling with the breech open.

The earliest metallic-cartridge breechloaders designed for general military issue began as conversions of muzzle-loading rifle-muskets. The upper rear portion of the barrel was filed or milled away and replaced by a hinged breechblock which opened upward to permit loading. An internal angled firing pin allowed the re-use of the rifle's existing side-hammer. The Allin action made by Springfield Arsenal in the US hinged forward; the Snider-Enfield
Snider-Enfield
The British .577 Snider-Enfield was a type of breech loading rifle. The firearm action was invented by the American Jacob Snider, and the Snider-Enfield was one of the most widely used of the Snider varieties. It was adopted by British Army as a conversion system for its ubiquitous Pattern 1853...
used by the British opened to the side. Whereas the British quickly replaced the Snider with a dropping-block Peabody style
Peabody action
The Peabody action was an early form of breechloading firearm action, where the heavy breechblock tilted downwards across a bolt mounted in the rear of the breechblock, operated by a lever under the rifle. The Peabody action most often used an external hammer to fire the cartridge.The Peabody...
Martini action, the US Army felt the trapdoor action to be adequate and followed its muzzleloader conversions with the new-production Springfield Model 1873
Springfield Model 1873
The Model 1873 "Trapdoor" Springfield was the first standard-issued breech-loading rifle adopted by the United States Army...
, which was the principal longarm of the Indian Wars and was still in service with some units in the Spanish-American War.

Although bolt actions are usually associated with fixed or detachable box magazines, in fact the first general-issue military breechloader was a single-shot bolt action: the paper-cartridge Prussian Needle Gun
Needle gun
The Dreyse needle-gun was a military breechloading rifle, famous as the main infantry weapon of the Prussians, who adopted it for service in 1848 as the Dreyse Zündnadelgewehr, or Prussian Model 1848...
of 1841. France countered in 1866 with its superior Chassepot rifle, also a paper-cartridge bolt action. The first metallic-cartridge bolt actions in general military service were the Berdan Type II
Berdan rifle
The Berdan rifle is a Russian rifle created by famous American firearms expert and inventor Hiram Berdan in 1868. Standard issue in the Russian army from 1869-1891, the Berdan was replaced by the Mosin-Nagant rifle...
introduced by Russia in 1870, the Mauser Model 1871
Mauser Model 1871
The Mauser Model 1871 adopted as the Gewehr 71 or Infanterie-Gewehr 71 was the first of millions of rifles manufactured to the designs of Paul Mauser and Wilhelm Mauser of the Mauser company.During 1870-71 trials with many different rifles took place, with the "M1869 Bavarian Werder" being the...
, and a modified Chassepot, the Gras rifle of 1874; all these were single-shots.

Single-shot bolt actions in .22 caliber were also widely manufactured as inexpensive "boys' guns" in the earlier 20th century; and there have been a few single-shot bolt-action shotguns, usually in .410 bore.

A revolver houses cartridges in a rotary cylinder and advances them in-line with the bore prior to each shot. Revolvers are most often handguns however examples of rifles and shotguns have been made. The cylinder is most often rotated by manipulation of the trigger and/or hammer although some are semi-automatic using recoil to rotate the cylinder and cock the hammer.

In bolt action firearms, the opening and closing of the breech is operated manually by a bolt. Opening the breech ejects a cartridge while subsequently closing the breech chambers a new round. The three predominant bolt-action systems are the Mauser, Lee-Enfield
Lee-Enfield
The Lee-Enfield bolt-action, magazine-fed, repeating rifle was the main firearm used by the military forces of the British Empire and Commonwealth during the first half of the 20th century...
, and Mosin–Nagant systems.

Lever action firearms uses a lever to eject and chamber cartridges. An example of firearms using lever action are the Winchester Repeating Rifle
Winchester rifle
In common usage, Winchester rifle usually means any of the lever-action rifles manufactured by the Winchester Repeating Arms Company, though the company has also manufactured many rifles of other action types...
and Marlin Model 1894
Marlin Model 1894
The Marlin Model 1894 is a lever-action repeating rifle introduced in 1894 by the Marlin Firearms Company of North Haven, Connecticut. At its introduction the rifle came with a 24-inch barrel and was chambered for a variety of pistol rounds such as .25-20 Winchester, .32-20 Winchester, .38-40, and...
.

Blowback operation is a system in which semi-automatic and fully automatic firearms operate through the energy created by combustion in the chamber and bore acting directly on the bolt face through the cartridge.

Blow-Forward operation is where the firearm lacks a bolt but has a moving barrel that is forced forward by the friction of the projectile against a spring as means of reloading a fresh round.

Recoil operation is a type of locked-breech firearm action used in semi-automatic and fully automatic firearms. As the name implies, these actions use the force of recoil to provide the energy to cycle the action.