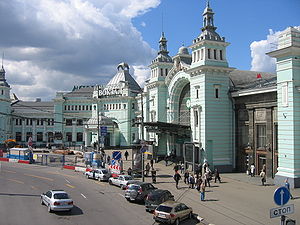 Belorussky Rail Terminal is one of nine rail terminals in Moscow
Moscow
Moscow is the capital, the most populous city, and the most populous federal subject of Russia. The city is a major political, economic, cultural, scientific, religious, financial, educational, and transportation centre of Russia and the continent...
. It was opened in 1870 and rebuilt in its current form in 1910-12.

Construction of the railway from Moscow to Smolensk
Smolensk
Smolensk is a city and the administrative center of Smolensk Oblast, Russia, located on the Dnieper River. Situated west-southwest of Moscow, this walled city was destroyed several times throughout its long history since it was on the invasion routes of both Napoleon and Hitler. Today, Smolensk...
, and then to Minsk
Minsk
- Ecological situation :The ecological situation is monitored by Republican Center of Radioactive and Environmental Control .During 2003–2008 the overall weight of contaminants increased from 186,000 to 247,400 tons. The change of gas as industrial fuel to mazut for financial reasons has worsened...
and Warsaw
Warsaw
Warsaw is the capital and largest city of Poland. It is located on the Vistula River, roughly from the Baltic Sea and from the Carpathian Mountains. Its population in 2010 was estimated at 1,716,855 residents with a greater metropolitan area of 2,631,902 residents, making Warsaw the 10th most...
, started in the second half of the 1860s. Construction of the station, known as Smolensky, began in late April 1869. A grand opening of the Moscow-Smolensk railway took place on 19 September 1870, the station became the sixth in Moscow. In November 1871 after the extension of the railway to Belarus, the station was renamed Belorussky Station. On the 15 May 1910 the right wing of the new station opened, and in 26 February 1912 and the left wing opened. The station was designed by architect Ivan Strukov. On the 4 May 1912 the railway was renamed the Alexander Railway, the station was renamed Alexander Station. In August 1922 the Alexander and the Moscow-Baltic railways were merged into the Moscow-Belarus-Baltic, so the station was renamed Belorussian-Baltic station. In May 1936 and, after yet another reorganization of the railways, the station received its present name - Belorussky Station.