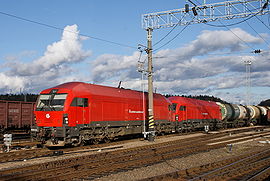 Lithuanian Railways is the national, state-owned railway company of Lithuania
Lithuania
Lithuania , officially the Republic of Lithuania is a country in Northern Europe, the biggest of the three Baltic states. It is situated along the southeastern shore of the Baltic Sea, whereby to the west lie Sweden and Denmark...
. It operates all the railway lines in the country.

Lithuanian Railways' main network consists of 1749 km of broad gauge
Russian gauge
In railway terminology, Russian gauge refers to railway track with a gauge between 1,520 mm and . In a narrow sense as defined by Russian Railways it refers to gauge....
railway of which 122 km are electrified. They also operate 22 km of standard gauge
Standard gauge
The standard gauge is a widely-used track gauge . Approximately 60% of the world's existing railway lines are built to this gauge...
lines. A 179 km narrow gauge
Narrow gauge
A narrow gauge railway is a railway that has a track gauge narrower than the of standard gauge railways. Most existing narrow gauge railways have gauges of between and .- Overview :...
network, listed as an object of cultural heritage, was split into a separate company Aukštaitijos Siaurasis Geležinkelis in 2001. 68 km of narrow gauge, serving five stations, are regularly used, employing 12 locomotives.

In 1851, the government of Russia
Russian Empire
The Russian Empire was a state that existed from 1721 until the Russian Revolution of 1917. It was the successor to the Tsardom of Russia and the predecessor of the Soviet Union...
made the decision to build the Warsaw – Saint Petersburg Railway
Warsaw – Saint Petersburg Railway
The Saint Petersburg – Warsaw Railway, Russian "Санкт-Петербурго-Варшавская железная дорога" is a long railway, built in the 19th century by the Russian Empire to connect Russia with Central Europe. At the time the entire railway was within Russia, as Warsaw was under a Russian partition of Poland...
. The line included a stretch from Daugavpils
Daugavpils
Daugavpils is a city in southeastern Latvia, located on the banks of the Daugava River, from which the city gets its name. Daugavpils literally means "Daugava Castle". With a population of over 100,000, it is the second largest city in the country after the capital Riga, which is located some...
–Vilnius
Vilnius
Vilnius is the capital of Lithuania, and its largest city, with a population of 560,190 as of 2010. It is the seat of the Vilnius city municipality and of the Vilnius district municipality. It is also the capital of Vilnius County...
–Kaunas
Kaunas
Kaunas is the second-largest city in Lithuania and has historically been a leading centre of Lithuanian economic, academic, and cultural life. Kaunas was the biggest city and the center of a powiat in Trakai Voivodeship of the Grand Duchy of Lithuania since 1413. During Russian Empire occupation...
–Virbalis
Virbalis
Virbalis is a city in the Vilkaviškis district municipality, Lithuania. It is located west of Vilkaviškis.As German Wirballen, Polish Wierzbołów, or Russian Verzhbolovo , it is frequently mentioned in historical as well in modern literature...
which was started in 1858 and finished in 1860. When the German
Kaiser
Kaiser is the German title meaning "Emperor", with Kaiserin being the female equivalent, "Empress". Like the Russian Czar it is directly derived from the Latin Emperors' title of Caesar, which in turn is derived from the personal name of a branch of the gens Julia, to which Gaius Julius Caesar,...
army occupied Lithuania in 1915, the railway became the main supplier of food staff and ammunition for the German army. In 1918 Lithuanian independence was restored, and in 1919 the Lithuanian government concluded an agreement with Germany on the hand over of the railway assets to the Ministry of Transport.

During the years after WWI, Lithuanian Railways reconstructed the tracks, connecting them into a complete network. In 1923 the Klaipėda region
Klaipeda Region
The Klaipėda Region or Memel Territory was defined by the Treaty of Versailles in 1920 when it was put under the administration of the Council of Ambassadors...
was annexed by Lithuania and the port of Klaipėda
Klaipeda
Klaipėda is a city in Lithuania situated at the mouth of the Nemunas River where it flows into the Baltic Sea. It is the third largest city in Lithuania and the capital of Klaipėda County....
had became a part of the Lithuanian railway system. In 1940 the USSR occupied Lithuania, and railway activities were reorganized and all the agreements of Lithuania concluded with the neighbouring countries were terminated. In 1941, the Nazis occupying force changed
Gauge conversion
In rail transport, gauge conversion is the process of converting a railway from one rail gauge to another, through the alteration of the railway tracks...
most of the network from broad gauge
Russian gauge
In railway terminology, Russian gauge refers to railway track with a gauge between 1,520 mm and . In a narrow sense as defined by Russian Railways it refers to gauge....
to standard gauge
Standard gauge
The standard gauge is a widely-used track gauge . Approximately 60% of the world's existing railway lines are built to this gauge...
. This was changed back by Soviets in 1944. During Soviet times all of the Baltic states
Baltic states
The term Baltic states refers to the Baltic territories which gained independence from the Russian Empire in the wake of World War I: primarily the contiguous trio of Estonia, Latvia, Lithuania ; Finland also fell within the scope of the term after initially gaining independence in the 1920s.The...
railways were managed from Riga
Riga
Riga is the capital and largest city of Latvia. With 702,891 inhabitants Riga is the largest city of the Baltic states, one of the largest cities in Northern Europe and home to more than one third of Latvia's population. The city is an important seaport and a major industrial, commercial,...
. In 1991, the railways of the Baltic region were once again divided into separate railway companies.