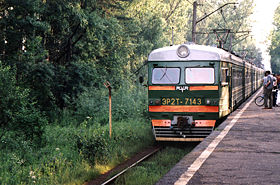 Barvikha is a village in Odintsovsky District
Odintsovsky District
Odintsovsky District is an administrative and municipal district , one of the 38 in Moscow Oblast, Russia....
of Moscow Oblast
Moscow Oblast
Moscow Oblast , or Podmoskovye , is a federal subject of Russia . Its area, at , is relatively small compared to other federal subjects, but it is one of the most densely populated regions in the country and, with the 2010 population of 7,092,941, is the second most populous federal subject...
, Russia
Russia
Russia or , officially known as both Russia and the Russian Federation , is a country in northern Eurasia. It is a federal semi-presidential republic, comprising 83 federal subjects...
. It is the site of the Barvikha Sanatorium, the health resort of the President of Russia. During the Soviet era, Barvikha was known as the site of the most desirable state dacha
Dacha
Dacha is a Russian word for seasonal or year-round second homes often located in the exurbs of Soviet and post-Soviet cities. Cottages or shacks serving as family's main or only home are not considered dachas, although many purpose-built dachas are recently being converted for year-round residence...
s for government officials and leading intellectuals, and many of Russia's wealthiest individuals have built private luxury dachas here since the late 1990s.

The village lies on the Rublyovo-Uspenskoye road leading to the west from Moscow
Moscow
Moscow is the capital, the most populous city, and the most populous federal subject of Russia. The city is a major political, economic, cultural, scientific, religious, financial, educational, and transportation centre of Russia and the continent...
, just outside the Moscow Ring Road and the boundaries of the city of Moscow. There is a Barvikha rail station on a spur of the Belarus direction of the Moscow Railway
Moscow Railway
The Moscow Railway is a subsidiary of Russian Railways that handles half of Russia's suburban railway operations and a quarter of the country's passenger traffic...
, first opened at the current site in 1927.

Barvikha is surrounded by a zone of pine forest nature preserve on the south bank of the Moscow River.

Two villages, Lutskaya and Shulgina existed in the area where modern Barvikha now stands. Later they grew and merged into a settlement, which was originally called Samynki , after the Saminka River, on which the settlement stood. Over time, the name changed to Borikha and later—to Barvikha. By 1890, the population of the village consisted of almost 100 people.

Barvikha contains the Barvikha Sanatorium , a well-equipped medical center which treated several Russian leaders. The sanatorium was designed by architect Boris Iofan
Boris Iofan
Boris Mihailovich Iofan was a Russian Soviet architect, known for his Stalinist architecture buildings like 1931 House on Embankment and the 1931-1933 winning draft of the Palace of Soviets.- Background :...
, and completed in 1935. It was designated as a clinic for leading government officials suffering from illnesses of digestion and metabolism; it was there that Bulgarian leader Georgi Dimitrov
Georgi Dimitrov
Georgi Dimitrov Mikhaylov , also known as Georgi Mikhaylovich Dimitrov , was a Bulgarian Communist politician...
died in 1949. In 1944 and 1945, writer and Communist Party official Aleksandr Shcherbakov
Aleksandr Shcherbakov
Aleksandr Sergueyevich Shcherbakov , was a founding member of the Soviet Writers' Union, along with Maxim Gorky. Following the latter's death in 1936, Shcherbakov was transferred from his role as First Secretary to the lower role of Secretary of the Leningrad Regional Committee where he reported...
was treated at Barvikha for cardiac illness. He died of heart failure in 1945. In 1952, Shcherbakov's death became one of the issues in Doctors' Plot
Doctors' plot
The Doctors' plot was the most dramatic anti-Jewish episode in the Soviet Union during Joseph Stalin's regime, involving the "unmasking" of a group of prominent Moscow doctors, predominantly Jews, as conspiratorial assassins of Soviet leaders...
affair. The deputy director of the medical department of the sanitarium, Roman Ryzhikov, was arrested and interrogated, but later released.

The Rublyovo-Uspenskoye Road, colloquially known as the Rublyovka
Rublevka
Rublevka or Rublyovka is an unofficial name of a prestigious residential area west of Moscow, Russia. The name is derived from the name of Rublyovskoye shosse. The residences of many Government officials and successful businesspeople are located along Rublevka. Real estate prices there are some of...
, has long been a site for dacha
Dacha
Dacha is a Russian word for seasonal or year-round second homes often located in the exurbs of Soviet and post-Soviet cities. Cottages or shacks serving as family's main or only home are not considered dachas, although many purpose-built dachas are recently being converted for year-round residence...
s. During the Soviet period, prominent officials and intellectuals often used state-owned dachas in the vicinity of Barvikha. Writer Aleksey Tolstoy and his family occupied a state-owned dacha in Barvikha from 1938 through his death in 1945.

Beginning in the late 1990s, Barvikha has become a popular site for the dachas of wealthy residents of Moscow. In contrast to the traditional wood-built dachas, these new, privately-owned cottages are often much larger and include mansion-like residences with full amenities and private security. The rapid development has substantially increased property values and has generated some friction with long-term local residents.

The Barvikha Luxury Village, a high-end shopping center including Ferrari
Ferrari
Ferrari S.p.A. is an Italian sports car manufacturer based in Maranello, Italy. Founded by Enzo Ferrari in 1929, as Scuderia Ferrari, the company sponsored drivers and manufactured race cars before moving into production of street-legal vehicles as Ferrari S.p.A. in 1947...
and Harley-Davidson
Harley-Davidson
Harley-Davidson , often abbreviated H-D or Harley, is an American motorcycle manufacturer. Founded in Milwaukee, Wisconsin, during the first decade of the 20th century, it was one of two major American motorcycle manufacturers to survive the Great Depression...
dealerships, opened in 2005.
The source of this article is wikipedia, the free encyclopedia.  The text of this article is licensed under the GFDL.