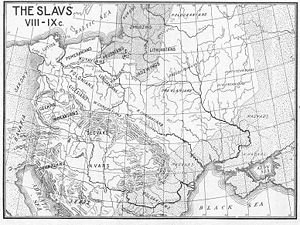 The Dregoviches were one of the tribal
Tribe
A tribe, viewed historically or developmentally, consists of a social group existing before the development of, or outside of, states.Many anthropologists use the term tribal society to refer to societies organized largely on the basis of kinship, especially corporate descent groups .Some theorists...
unions of Early East Slavs, and inhabited the territories down the stream of the Pripyat River
Pripyat River
The Pripyat River or Prypiat River is a river in Eastern Europe, approximately long. It flows east through Ukraine, Belarus, and Ukraine again, draining into the Dnieper....
and northern parts of the right bank of the Dnieper river
Dnieper River
The Dnieper River is one of the major rivers of Europe that flows from Russia, through Belarus and Ukraine, to the Black Sea.The total length is and has a drainage basin of .The river is noted for its dams and hydroelectric stations...
(more exact extents of the tribe's domain are still unknown). The name of the tribe probably derives from the Old Ruthenian word дрегва or дрягва (drehva, or dryahva, which means "swamp
Swamp
A swamp is a wetland with some flooding of large areas of land by shallow bodies of water. A swamp generally has a large number of hammocks, or dry-land protrusions, covered by aquatic vegetation, or vegetation that tolerates periodical inundation. The two main types of swamp are "true" or swamp...
") because the Dregovichs used to live in the marshlands.

The first known reference to Dregovichs is in the Primary Chronicle
Primary Chronicle
The Primary Chronicle , Ruthenian Primary Chronicle or Russian Primary Chronicle, is a history of Kievan Rus' from about 850 to 1110, originally compiled in Kiev about 1113.- Three editions :...
, where they are listed among the twelve nations. However, there is a reference in the De Administrando Imperio
De Administrando Imperio
De Administrando Imperio is the Latin title of a Greek work written by the 10th-century Eastern Roman Emperor Constantine VII. The Greek title of the work is...
of Constantine Porphyrogenitus to the 'Drugovichians'. Since the reference appears in a passage describing the Drugovichians as one of the Slavic peoples who pay tribute to the Kievan Rus, and they are named alongside the Severians and Krivichians, it seems likely these are the same people. By the 12th century they were assimilated into the main East Slavic peoples
Slavic peoples
The Slavic people are an Indo-European panethnicity living in Eastern Europe, Southeast Europe, North Asia and Central Asia. The term Slavic represents a broad ethno-linguistic group of people, who speak languages belonging to the Slavic language family and share, to varying degrees, certain...
.

The chronicle
Chronicle
Generally a chronicle is a historical account of facts and events ranged in chronological order, as in a time line. Typically, equal weight is given for historically important events and local events, the purpose being the recording of events that occurred, seen from the perspective of the...
s do not tell historians much about the Dregovichs. We only know that they had their own prince
Prince
Prince is a general term for a ruler, monarch or member of a monarch's or former monarch's family, and is a hereditary title in the nobility of some European states. The feminine equivalent is a princess...
ly rule in the city of Turov. In the 10th century, the lands of the Dregoviches became a part of Kievan Rus and later—the Turaw Principality. The northwestern part of the land of the Dregoviches became a part of the Polotsk Principality.

The Dregovichs left some archaeological monuments of the 9th and 10th century along the Pripyat, such as the remnants of agricultural settlement
Town
A town is a human settlement larger than a village but smaller than a city. The size a settlement must be in order to be called a "town" varies considerably in different parts of the world, so that, for example, many American "small towns" seem to British people to be no more than villages, while...
s and kurgan
Kurgan
Kurgan is the Turkic term for a tumulus; mound of earth and stones raised over a grave or graves, originating with its use in Soviet archaeology, now widely used for tumuli in the context of Eastern European and Central Asian archaeology....
s with cremated bodies (unlike the kurgans of 11th–12th century with intact bones). There are sepulchral structures that look like small wooden houses with span roofs.
The source of this article is wikipedia, the free encyclopedia.  The text of this article is licensed under the GFDL.