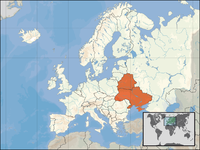 The name Ruthenian is a culturally loaded term and has different meanings according to the context in which it is used. Initially, it was the ethnonym
Ethnonym
An ethnonym is the name applied to a given ethnic group. Ethnonyms can be divided into two categories: exonyms and autonyms or endonyms .As an example, the ethnonym for...
used for the East Slavic
East Slavs
The East Slavs are Slavic peoples speaking East Slavic languages. Formerly the main population of the medieval state of Kievan Rus, by the seventeenth century they evolved into the Russian, Ukrainian, and Belarusian peoples.-Sources:...
peoples who lived in Rus'. Later it was used predominantly for Ukrainians
Ukrainians
Ukrainians are an East Slavic ethnic group native to Ukraine, which is the sixth-largest nation in Europe. The Constitution of Ukraine applies the term 'Ukrainians' to all its citizens...
. With the emergence of Ukrainian nationalism
Ukrainian nationalism
Ukrainian nationalism refers to the Ukrainian version of nationalism.Although the current Ukrainian state emerged fairly recently, some historians, such as Mykhailo Hrushevskyi, Orest Subtelny and Paul Magosci have cited the medieval state of Kievan Rus' as an early precedents of specifically...
in the mid nineteenth-century, the term went out of use, first in eastern and central Ukraine, and later in western Ukraine. In western Ukraine (namely Carpathian Ruthenia
Carpathian Ruthenia
Carpathian Ruthenia is a region in Eastern Europe, mostly located in western Ukraine's Zakarpattia Oblast , with smaller parts in easternmost Slovakia , Poland's Lemkovyna and Romanian Maramureş.It is...
), and among some emigré populations outside of Ukraine, its use has been retained on a small scale (see Pannonian Rusyns
Pannonian Rusyns
Rusyns in Pannonia, or simply Rusyns or Ruthenians , are a Slavic minority in Serbia and Croatia...
).

Originally, the term Rusyn was an ethnonym applied to the eastern Slavic-speaking ethnic group who inhabited the cultural and ethnic region of Rus' (Русь); often written through its Latin
Latin
Latin is an Italic language originally spoken in Latium and Ancient Rome. It, along with most European languages, is a descendant of the ancient Proto-Indo-European language. Although it is considered a dead language, a number of scholars and members of the Christian clergy speak it fluently, and...
variant Ruthenia
Ruthenia
Ruthenia is the Latin word used onwards from the 13th century, describing lands of the Ancient Rus in European manuscripts. Its geographic and culturo-ethnic name at that time was applied to the parts of Eastern Europe. Essentially, the word is a false Latin rendering of the ancient place name Rus...
.

The names "Ruthenians" or "Ruthenes" were the Latin terms referring to Slavic
Slavic peoples
The Slavic people are an Indo-European panethnicity living in Eastern Europe, Southeast Europe, North Asia and Central Asia. The term Slavic represents a broad ethno-linguistic group of people, who speak languages belonging to the Slavic language family and share, to varying degrees, certain...
Orthodox people (those who spoke the Ruthenian dialect) who lived in the Grand Duchy of Lithuania
Grand Duchy of Lithuania
The Grand Duchy of Lithuania was a European state from the 12th /13th century until 1569 and then as a constituent part of Polish-Lithuanian Commonwealth until 1791 when Constitution of May 3, 1791 abolished it in favor of unitary state. It was founded by the Lithuanians, one of the polytheistic...
. They inhabited the area that is now Belarus
Belarus
Belarus , officially the Republic of Belarus, is a landlocked country in Eastern Europe, bordered clockwise by Russia to the northeast, Ukraine to the south, Poland to the west, and Lithuania and Latvia to the northwest. Its capital is Minsk; other major cities include Brest, Grodno , Gomel ,...
, Ukraine
Ukraine
Ukraine is a country in Eastern Europe. It has an area of 603,628 km², making it the second largest contiguous country on the European continent, after Russia...
and Western Russia
Russia
Russia or , officially known as both Russia and the Russian Federation , is a country in northern Eurasia. It is a federal semi-presidential republic, comprising 83 federal subjects...
(area around Bryansk
Bryansk
Bryansk is a city and the administrative center of Bryansk Oblast, Russia, located southwest of Moscow. Population: -History:The first written mention of Bryansk was in 1146, in the Hypatian Codex, as Debryansk...
, Smolensk
Smolensk
Smolensk is a city and the administrative center of Smolensk Oblast, Russia, located on the Dnieper River. Situated west-southwest of Moscow, this walled city was destroyed several times throughout its long history since it was on the invasion routes of both Napoleon and Hitler. Today, Smolensk...
, Velizh
Velizh
Velizh is a town and the administrative center of Velizhsky District of Smolensk Oblast, Russia, situated on the bank of the Western Dvina, from Smolensk. Population:...
and Vyazma
Vyazma
Vyazma is a town and the administrative center of Vyazemsky District of Smolensk Oblast, Russia, located on the Vyazma River, about halfway between Smolensk and Mozhaysk. Throughout its turbulent history, the city defended western approaches to the city of Moscow...
). It was also the ethnonym used by the Ukrainian kozaks to describe themselves.

After the area of White Ruthenia (Belarus) became part of the Russian Empire
Russian Empire
The Russian Empire was a state that existed from 1721 until the Russian Revolution of 1917. It was the successor to the Tsardom of Russia and the predecessor of the Soviet Union...
, the people of the area were often seen as a sub-group of Russians
Russians
The Russian people are an East Slavic ethnic group native to Russia, speaking the Russian language and primarily living in Russia and neighboring countries....
, and were often referred to as "White Russians" due to a confusion of the terms "Russia" and "Ruthenia."

Later "Ruthenians" or "Ruthenes" were used as a generic term for Greek Catholic, who inhabited Galicia and adjoining territories until the early twentieth-century; this group spoke Western dialects of the Ukrainian language
Ukrainian language
Ukrainian is a language of the East Slavic subgroup of the Slavic languages. It is the official state language of Ukraine. Written Ukrainian uses a variant of the Cyrillic alphabet....
and called themselves Русины, Rusyns (Carpatho-Russians).

The language these "Ruthenians" or "Ruthenes" spoke was also called the "Ruthenian language
Ruthenian language
Ruthenian, or Old Ruthenian , is a term used for the varieties of Eastern Slavonic spoken in the Grand Duchy of Lithuania and later in the East Slavic territories of the Polish–Lithuanian Commonwealth....
"; the name Ukrajins’ka mova ("Ukrainian language") became accepted by much of the Ukrainian literary class only in the early twentieth-century in Austro-Hungarian
Austria-Hungary
Austria-Hungary , more formally known as the Kingdoms and Lands Represented in the Imperial Council and the Lands of the Holy Hungarian Crown of Saint Stephen, was a constitutional monarchic union between the crowns of the Austrian Empire and the Kingdom of Hungary in...
Galicia. After the dissolution of Austria-Hungary in 1918 the term "Ukrainian
Ukrainians
Ukrainians are an East Slavic ethnic group native to Ukraine, which is the sixth-largest nation in Europe. The Constitution of Ukraine applies the term 'Ukrainians' to all its citizens...
" was usually applied to all Ukrainian-speaking inhabitants of Galicia.