A beer engine is a device for pump
Pump
A pump is a device used to move fluids, such as liquids, gases or slurries.A pump displaces a volume by physical or mechanical action. Pumps fall into three major groups: direct lift, displacement, and gravity pumps...
ing beer
Beer
Beer is the world's most widely consumed andprobably oldest alcoholic beverage; it is the third most popular drink overall, after water and tea. It is produced by the brewing and fermentation of sugars, mainly derived from malted cereal grains, most commonly malted barley and malted wheat...
, originally manually operated and typically used to dispense beer from a cask
CASK
Peripheral plasma membrane protein CASK is a protein that in humans is encoded by the CASK gene. This gene is also known by several other names: CMG 2 , calcium/calmodulin-dependent serine protein kinase 3 and membrane-associated guanylate kinase 2.-Genomics:This gene is located on the short arm of...
or container in a pub's basement or cellar. It was invented by the locksmith and hydraulic
Hydraulics
Hydraulics is a topic in applied science and engineering dealing with the mechanical properties of liquids. Fluid mechanics provides the theoretical foundation for hydraulics, which focuses on the engineering uses of fluid properties. In fluid power, hydraulics is used for the generation, control,...
engineer Joseph Bramah
Joseph Bramah
Joseph Bramah , born Stainborough Lane Farm, Wentworth, Yorkshire, England, was an inventor and locksmith. He is best known for having invented the hydraulic press...
in 1797. Strictly the term refers to the pump itself, which is normally manually operated, though electrically powered and gas powered pumps are occasionally used; when manually powered, the term handpump is often used to refer to both the pump and the associated handle.

The beer engine is normally located below the bar, and the visible handle is used to draw the beer through a flexible tube to the spout, below which the glass is placed. Modern hand pumps may clamp onto the edge of the bar or be mounted in a more permanent fashion integrated with the top of the bar.

A pump clip is usually attached to the handle by a spring clip giving the name, and sometimes other details such as the brewer's name, beer type and alcoholic strength, of the beer being served through that handpump.

The handle of a handpump is often used as a symbol of cask ale
Cask ale
Cask ale or cask-conditioned beer is the term for unfiltered and unpasteurised beer which is conditioned and served from a cask without additional nitrogen or carbon dioxide pressure...
, although this can also be served by electric pumps, air pressure pumps, or by gravity. By contrast, keg beer dispensers usually feature illuminated countertop fittings behind which a handle opens a valve that allows the gas pressure in the keg to force beer to the attached spout. 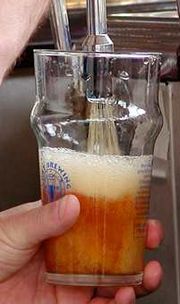 A swan neck is a curved spout. This is often used in conjunction with a sparkler - a nozzle containing small holes - fitted to the spout to aerate the beer as it enters the glass, giving a frothier head
Beer head
Beer head is the frothy foam on top of liquid beer after it is poured in a glass. It is produced by bubbles of carbon dioxide rising to the surface....
; this presentation style is more popular in the North of England than in the South.

A sparkler (also called a sparklet) is a device that can be optionally attached to the nozzle of a beer engine. Designed rather like a shower-head, when beer is dispensed through a sparkler, the beer becomes aerated and frothy which results in a beer that has a noticeable head
Beer head
Beer head is the frothy foam on top of liquid beer after it is poured in a glass. It is produced by bubbles of carbon dioxide rising to the surface....
on it. Some CO2 is carried away into the head, resulting in a softer, sweeter flavour due to the loss of normal CO2 acidity.

There is some dispute about the benefits of a sparkler. There is an argument that the sparkler can reduce the flavour and aroma, especially of the hops
Hops
Hops are the female flower clusters , of a hop species, Humulus lupulus. They are used primarily as a flavoring and stability agent in beer, to which they impart a bitter, tangy flavor, though hops are also used for various purposes in other beverages and herbal medicine...
, in some beers. The counter argument is that the sparkler takes away harshness. A pub may favour sparklers because the presence of the head means a beer with a larger head.

Breweries may state whether or not a sparkler is preferred when serving their beers. Generally, breweries in Northern England
England
England is a country that is part of the United Kingdom. It shares land borders with Scotland to the north and Wales to the west; the Irish Sea is to the north west, the Celtic Sea to the south west, with the North Sea to the east and the English Channel to the south separating it from continental...
serve their beers with a sparkler attached and breweries in the South will serve them without, but this is by no means definitive. The Good Beer Guide
Good Beer Guide
The Good Beer Guide is a book published annually by the Campaign for Real Ale listing what they consider to be the best cask ale outlets in the United Kingdom.-Details:...
indicates that when a brewery has not stated a preference, their beers should be served without sparklers. 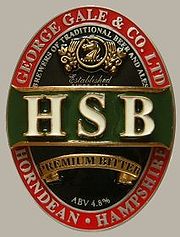 Pump clips are badges that are attached to handpumps in pubs to show which cask ale
Cask ale
Cask ale or cask-conditioned beer is the term for unfiltered and unpasteurised beer which is conditioned and served from a cask without additional nitrogen or carbon dioxide pressure...
s are available.
In addition to the name of the beer served through the pump, they give other details such as the brewer's name and alcoholic strength of the beer.

They can be made of various materials. For beers that are brewed regularly by the big breweries
Brewery
A brewery is a dedicated building for the making of beer, though beer can be made at home, and has been for much of beer's history. A company which makes beer is called either a brewery or a brewing company....
, high quality plastic
Plastic
A plastic material is any of a wide range of synthetic or semi-synthetic organic solids used in the manufacture of industrial products. Plastics are typically polymers of high molecular mass, and may contain other substances to improve performance and/or reduce production costs...
, metal
Metal
A metal , is an element, compound, or alloy that is a good conductor of both electricity and heat. Metals are usually malleable and shiny, that is they reflect most of incident light...
or ceramic
Ceramic
A ceramic is an inorganic, nonmetallic solid prepared by the action of heat and subsequent cooling. Ceramic materials may have a crystalline or partly crystalline structure, or may be amorphous...
pump clips are used. Smaller breweries would use a printed plastic pump clip and for one-off beers laminate
Laminate
A laminate is a material that can be constructed by uniting two or more layers of material together. The process of creating a laminate is lamination, which in common parlance refers to the placing of something between layers of plastic and gluing them with heat and/or pressure, usually with an...
d paper is used. There are variations on the material used, and the gaudiness or tastefulness of the decoration depending on how much the brewery wants to market their beers at the point of sale. Novelty pump clips have also been made of wood
Wood
Wood is a hard, fibrous tissue found in many trees. It has been used for hundreds of thousands of years for both fuel and as a construction material. It is an organic material, a natural composite of cellulose fibers embedded in a matrix of lignin which resists compression...
, slate
Slate
Slate is a fine-grained, foliated, homogeneous metamorphic rock derived from an original shale-type sedimentary rock composed of clay or volcanic ash through low-grade regional metamorphism. The result is a foliated rock in which the foliation may not correspond to the original sedimentary layering...
and compact disc
Compact Disc
The Compact Disc is an optical disc used to store digital data. It was originally developed to store and playback sound recordings exclusively, but later expanded to encompass data storage , write-once audio and data storage , rewritable media , Video Compact Discs , Super Video Compact Discs ,...
s. Some even incorporate electronic flashing lights
Light-emitting diode
A light-emitting diode is a semiconductor light source. LEDs are used as indicator lamps in many devices and are increasingly used for other lighting...
. Older pump clips were made of enamel
Vitreous enamel
Vitreous enamel, also porcelain enamel in U.S. English, is a material made by fusing powdered glass to a substrate by firing, usually between 750 and 850 °C...
.

The term "pump clip" presumably originates from the clip that attaches it to the pump handle. These could consist of a two-piece plastic ring which clamps to the handle with two screw
Screw
A screw, or bolt, is a type of fastener characterized by a helical ridge, known as an external thread or just thread, wrapped around a cylinder. Some screw threads are designed to mate with a complementary thread, known as an internal thread, often in the form of a nut or an object that has the...
s. Plastic and laminated paper pump clips usually have a white plastic clip fixed with a sticky double-sided pad that simply pushes onto the handle.
The source of this article is wikipedia, the free encyclopedia.  The text of this article is licensed under the GFDL.