Encyclopedia
The Battle of Chemulpo Bay ( Jinsen'oki kaisen ) was an early naval battle
Naval battle
A naval battle is a battle fought using boats, ships or other waterborne vessels. Most naval battles have occurred at sea, but a few have taken place on lakes or rivers. The earliest recorded naval battle took place in 1210 BC near Cyprus...
in the Russo-Japanese War
Russo-Japanese War
The Russo-Japanese War was "the first great war of the 20th century." It grew out of rival imperial ambitions of the Russian Empire and Japanese Empire over Manchuria and Korea...
(1904–1905), which took place on 9 February 1904, off the coast of present-day Incheon
Incheon
The Incheon Metropolitan City is located in northwestern South Korea. The city was home to just 4,700 people when Jemulpo port was built in 1883. Today 2.76 million people live in the city, making it Korea’s third most populous city after Seoul and Busan Metropolitan City...
, Korea
Korea
Korea ) is an East Asian geographic region that is currently divided into two separate sovereign states — North Korea and South Korea. Located on the Korean Peninsula, Korea is bordered by the People's Republic of China to the northwest, Russia to the northeast, and is separated from Japan to the...
.

The Japanese protected cruiser
Protected cruiser
The protected cruiser is a type of naval cruiser of the late 19th century, so known because its armoured deck offered protection for vital machine spaces from shrapnel caused by exploding shells above...
had been based at Chemulpo for the past 10 months, and had been keeping watch on the Russian armoured cruiser  and the aging gunboat
Gunboat
A gunboat is a naval watercraft designed for the express purpose of carrying one or more guns to bombard coastal targets, as opposed to those military craft designed for naval warfare, or for ferrying troops or supplies.-History:...
, also based at Chemulpo to look after Russian interests.

After the Russian transport Sungari arrived at Chemulpo on 7 February 1904, reporting the sighting of a large Japanese force approaching, the gunboat Korietz was ordered to Port Arthur to report and request instructions. In the early morning of 8 February, Korietz spotted Chiyoda outside the Chemulpo roadstead, and mistaking it for a fellow Russian ship, loaded its guns for a salute. On closing in, the crew of Korietz realized their mistake and in the ensuing confusion the guns were discharged. Chiyoda responded by launching a torpedo. Both sides missed, but this was the first actual exchange of fire in the Russo-Japanese War, and it is highly unclear which side actually opened fire first. Korietz retreated back to Chemulpo harbor.

Later in the morning of 8 February 1904, Chiyoda rendezvoused with the Admiral Uryu’s squadron outside the entrance to Chemulpo, and reported that several warships from neutral countries
Neutral country
A neutral power in a particular war is a sovereign state which declares itself to be neutral towards the belligerents. A non-belligerent state does not need to be neutral. The rights and duties of a neutral power are defined in Sections 5 and 13 of the Hague Convention of 1907...
were present in the anchorage, including: (Great Britain
Great Britain
Great Britain or Britain is an island situated to the northwest of Continental Europe. It is the ninth largest island in the world, and the largest European island, as well as the largest of the British Isles...
), Pascal (France
France
The French Republic , The French Republic , The French Republic , (commonly known as France , is a unitary semi-presidential republic in Western Europe with several overseas territories and islands located on other continents and in the Indian, Pacific, and Atlantic oceans. Metropolitan France...
), and Elba (Italy
Italy
Italy , officially the Italian Republic languages]] under the European Charter for Regional or Minority Languages. In each of these, Italy's official name is as follows:;;;;;;;;), is a unitary parliamentary republic in South-Central Europe. To the north it borders France, Switzerland, Austria and...
). An American warship—the gunboat —was also present, but she was further up the harbor. Admiral Uryu reasoned that if the Russians remained anchored in the midst of the neutral ships, they could not attack his transports, whereas if the Russians came out to do battle, he had ample force to deal with them. On the other hand, it was against international law
International law
Public international law concerns the structure and conduct of sovereign states; analogous entities, such as the Holy See; and intergovernmental organizations. To a lesser degree, international law also may affect multinational corporations and individuals, an impact increasingly evolving beyond...
to attack the Russians while they were anchored in a neutral port. Admiral Uryu sent a message requesting that the captains of HMS Talbot, Pascal and Elba to shift their anchorage, promising that no attack should be delivered before 16:00.

Admiral Uryu ordered the cruisers Chiyoda, , and his torpedo boat
Torpedo boat
A torpedo boat is a relatively small and fast naval vessel designed to carry torpedoes into battle. The first designs rammed enemy ships with explosive spar torpedoes, and later designs launched self-propelled Whitehead torpedoes. They were created to counter battleships and other large, slow and...
s to proceed up the channel with the troopship
Troopship
A troopship is a ship used to carry soldiers, either in peacetime or wartime...
s to commence the debarkation at once, while the cruisers , and were held in reserve. Three torpedo-boats took refuge near Niitaka far board.

At 18:00 on 8 February, Japanese troopships anchored at Chemulpo, mooring next to the Russians, and disembarked four battalions of soldiers of the IJA 12th Division in an operation that continued into the night. To the amazement of the tense Japanese, The Russians aboard Varyag and Korietz took no action, but continued to air out bunting as if on parade. The troop disembarkation was complete by 03:00 on 9 February, and all Japanese warships and transports withdrew from the harbor except for the Chiyoda.

The latter delivered a letter to the Varyag and neutral vessels, including the British cruiser Talbot, the French cruiser Pascal, the Italian cruiser Elba, and the U.S. gunboat USS Vicksburg and collier
Collier (ship type)
Collier is a historical term used to describe a bulk cargo ship designed to carry coal, especially for naval use by coal-fired warships. In the late 18th century a number of wooden-hulled sailing colliers gained fame after being adapted for use in voyages of exploration in the South Pacific, for...
USS Pompey.

Sir: I have the honor to notify you that as hostilities exist hetween the Empire of Japan and the Empire of Russia at present I shall attack the men-of-war of the Government of Russia, stationed at present in the port of Chemulpo, witli the force under my command, in case of the refusal of the Russian senior naval officer present at Chemulpo to my demand to leave the port of Chemulpo before the noon of the 9th of February, 1904, and I respectfully request you to keep away from the scene of action in the port so that no danger from the action would come to the ship under your command. The above-mentioned attack will not take place before 4 o'clock p. m. of the 9th of February, 1904, to give time to put into practice the above-mentioned request.

If there are any transports or merchant vessels of your nationality in the port of Chemulpo at present, I request you to communicate to them the above notification.

I have the honor to be, sir, your most obedient servant,


A conference was quickly convened on the Talbot by Captain Vsevolod Rudnev
Vsevolod Rudnev
Vsevolod Fyodorovich Rudnev was a career naval officer in the Imperial Russian Navy, noted for his heroic role in the Battle of Chemulpo Bay during the Russo-Japanese War of 1904-1905.-Biography:...
and the captains of neutral warships (except USS Vicksburg), and it was decided that the Russians would fight their way out.

At noon, Captain Denis Bagly of HMS Talbot came to Naniwa with a letter signed by all of the neutral captains except for the captain of USS Vicksburg, W.A. Marshall, declining the request to change anchorage, on the grounds that Chemulpo was a neutral port.

Outgunned and outnumbered, and refusing advice from the neutral captains to surrender, at 11"00 on 9 February, Captain Vsevolod Rudnev of the Varyag attempted to make a break for the open sea. 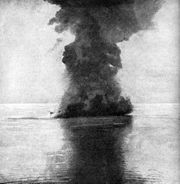 From the "Varyag" logbook:
Although the Russian logbook records damage to Asama, Japanese records indicate that she took no damage.

Unable to break past the Japanese squadron by mid-afternoon, Korietz and the badly battered Varyag returned to Chemulpo harbor at 13:15, where both took refuge near the neutral warships. At 16:00, Korietz was scuttled by her crew by blowing up two powder-rooms. Fragments of the blown-up ship landed dangerously close to neutral vessels. Fearing a greater exposion with potential casualties, the captains of the neutral warships present urged Rudnev not to blow up Varyag in similar manner. At 18:10, scuttled by her crew, Varyag rolled over on her port side and sank. Crewmen from Varyag were dispatched to the Russian transport Sungari, which had remained behind in the harbor during the battle, and set her on fire to prevent her from falling into Japanese hands.

The Battle of Chemulpo was a military victory for the Japanese. Russian casualties on the Varyag were heavy. All of Varyags twelve 6 in (152.4 mm) guns, all of her 12-pounders, and all of her 3-pounders were out of action, she took 5 serious hits at or below the waterline. Her upper works and ventilators were riddled, and her crew had put out at least five serious fires. Of her crew with a nominal strength of 580, 33 were killed and 97 wounded. Most serious cases among the Russian wounded were treated at the Red Cross hospital at Chemulpo. The Russian crews—except for the badly wounded—returned to Russia on neutral warships and were treated as heroes. Although severely damaged, Varyag—not blown up—was later raised by Japanese and incorporated into the Imperial Japanese Navy as the training ship .