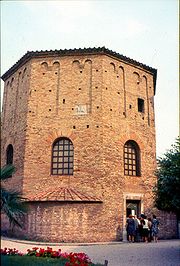 The Baptistry of Neon is a religious building in Ravenna
Ravenna
Ravenna is the capital city of the Province of Ravenna in the Emilia-Romagna region of Italy and the second largest comune in Italy by land area, although, at , it is little more than half the size of the largest comune, Rome...
, central Italy
Italy
Italy , officially the Italian Republic languages]] under the European Charter for Regional or Minority Languages. In each of these, Italy's official name is as follows:;;;;;;;;), is a unitary parliamentary republic in South-Central Europe. To the north it borders France, Switzerland, Austria and...
. The most ancient monument remaining in the city, it was partly erected on the site of a Roman bath. It is also called the Orthodox Baptistry to distinguish it from the Arian Baptistry
Arian Baptistry
The Arian Baptistry in Ravenna, Italy was erected by the Ostrogothic King Theodoric the Great between the end of the 5th century and the beginning of the sixth century, at the same time as the Basilica of Sant' Apollinare Nuovo....
constructed on behest of Ostrogothic King Theodoric
Theodoric the Great
Theodoric the Great was king of the Ostrogoths , ruler of Italy , regent of the Visigoths , and a viceroy of the Eastern Roman Empire...
some 50 years later.

The octagonal brick structure was erected by Bishop
Bishop
A bishop is an ordained or consecrated member of the Christian clergy who is generally entrusted with a position of authority and oversight. Within the Catholic Church, Eastern Orthodox, Oriental Orthodox Churches, in the Assyrian Church of the East, in the Independent Catholic Churches, and in the...
Ursus at the end of the 4th or beginning of the 5th century, as part of his great Basilica
Basilica
The Latin word basilica , was originally used to describe a Roman public building, usually located in the forum of a Roman town. Public basilicas began to appear in Hellenistic cities in the 2nd century BC.The term was also applied to buildings used for religious purposes...
(destroyed in 1734). The baptistery was finished by Bishop Neon at the end of the 5th century, at which time the mosaic
Mosaic
Mosaic is the art of creating images with an assemblage of small pieces of colored glass, stone, or other materials. It may be a technique of decorative art, an aspect of interior decoration, or of cultural and spiritual significance as in a cathedral...
decorations were added. The original floor is now some 3 meters underground, so the proper structure and extent of the building can no longer be seen. The octagonal design of the building, employed in virtually all Early Christian baptisteries, symbolizes the seven days of the week plus the Day of the Resurrection and Eternal Life.

The ceiling mosaic depicts John the Baptist
John the Baptist
John the Baptist was an itinerant preacher and a major religious figure mentioned in the Canonical gospels. He is described in the Gospel of Luke as a relative of Jesus, who led a movement of baptism at the Jordan River...
baptizing Jesus
Jesus
Jesus of Nazareth , commonly referred to as Jesus Christ or simply as Jesus or Christ, is the central figure of Christianity...
(depicted with beard) standing waist high in the Jordan River. To one side stands the personification of the Jordan river, with a reed in one hand and a garment in the other. A procession of the twelve apostles proceeds around the center mosaic in two directions, ending with Saint Peter
Saint Peter
Saint Peter or Simon Peter was an early Christian leader, who is featured prominently in the New Testament Gospels and the Acts of the Apostles. The son of John or of Jonah and from the village of Bethsaida in the province of Galilee, his brother Andrew was also an apostle...
meeting Saint Paul
Paul of Tarsus
Paul the Apostle , also known as Saul of Tarsus, is described in the Christian New Testament as one of the most influential early Christian missionaries, with the writings ascribed to him by the church forming a considerable portion of the New Testament...
. 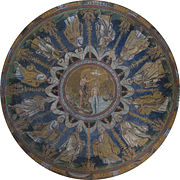 The Baptistry is one of the eight structures in Ravenna registered as UNESCO
UNESCO
The United Nations Educational, Scientific and Cultural Organization is a specialized agency of the United Nations...
World Heritage Sites. According to the ICOMOS evaluation of this patrimony, "this is the finest and most complete surviving example of the early Christian baptistery
Baptistery
In Christian architecture the baptistry or baptistery is the separate centrally-planned structure surrounding the baptismal font. The baptistry may be incorporated within the body of a church or cathedral and be provided with an altar as a chapel...
" which "retains the fluidity in representation of the human figure derived from Greco-Roman art".