Encyclopedia
The Arian Baptistry in Ravenna
Ravenna
Ravenna is the capital city of the Province of Ravenna in the Emilia-Romagna region of Italy and the second largest comune in Italy by land area, although, at , it is little more than half the size of the largest comune, Rome...
, Italy
Italy
Italy , officially the Italian Republic languages]] under the European Charter for Regional or Minority Languages. In each of these, Italy's official name is as follows:;;;;;;;;), is a unitary parliamentary republic in South-Central Europe. To the north it borders France, Switzerland, Austria and...
was erected by the Ostrogothic King Theodoric the Great
Theodoric the Great
Theodoric the Great was king of the Ostrogoths , ruler of Italy , regent of the Visigoths , and a viceroy of the Eastern Roman Empire...
between the end of the 5th century and the beginning of the sixth century, at the same time as the Basilica of Sant' Apollinare Nuovo.

Theodoric was an Arian
Arian
Arian may refer to:* Arius, a Christian presbyter in the 3rd and 4th century* a given name in different cultures: Aria, Aryan or Arian...
and decided to let the Goths (Arians) and the Latins ("orthodox" in the sense that they followed canon doctrine), live together but separately, and so there were separate neighborhoods and separate religious buildings.

Near his palace, the king commissioned an Arian cathedral, now called the Church of Spirito Santo, but originally named Hagia Anastasis (Holy Resurrection). It was re-consecrated as the Catholic cathedral of Saint Teodoro
Theodore of Amasea
See also Theodore StratelatesSaint Theodore of Amasea is one of the two saints called Theodore who are venerated as Warrior Saints and Great Martyrs in the Eastern Orthodox Church. He is also known as Theodore Tiro...
(soldier and martyr of Amasea in Porto) in 526. Little remains of the original church after its reconstruction in 1543; some historians speculate that the original mosaics were lost over a thousand years earlier during its Catholic reconstruction due to Arian themes. During this same period, Theodoric also had the baptistry built, today referred to as "of the Arians" in order to distinguish it from the Baptistry of Neon
Baptistry of Neon
The Baptistry of Neon is a religious building in Ravenna, central Italy. The most ancient monument remaining in the city, it was partly erected on the site of a Roman bath...
(of the Orthodox) which is about one century older.

The Baptistry is octagonal in shape with some little apses and arched openings near the top. Along the external perimeter there was once a walkway that stopped at the eastern apse. Clearly, the building was once part of a larger complex.
Inside are four niches and a dome with mosaics, depicting the baptism
Baptism
In Christianity, baptism is for the majority the rite of admission , almost invariably with the use of water, into the Christian Church generally and also membership of a particular church tradition...
of Jesus
Jesus
Jesus of Nazareth , commonly referred to as Jesus Christ or simply as Jesus or Christ, is the central figure of Christianity...
by Saint John the Baptist
John the Baptist
John the Baptist was an itinerant preacher and a major religious figure mentioned in the Canonical gospels. He is described in the Gospel of Luke as a relative of Jesus, who led a movement of baptism at the Jordan River...
. Jesus is shown as a beardless and naked androgyne, half-submerged in the Jordan. John the Baptist is wearing a leopard skin. On the left stands a pagan god in the guise of a white-haired, old man in a green cloak, holding a leather bag. He is the personification of the river Jordan. Above, the Holy Spirit
Holy Spirit
Holy Spirit is a term introduced in English translations of the Hebrew Bible, but understood differently in the main Abrahamic religions.While the general concept of a "Spirit" that permeates the cosmos has been used in various religions Holy Spirit is a term introduced in English translations of...
in the form of a dove sprays lustral water from its beak.

Below, a procession of the Apostles, led in separate directions by Saint Peter
Saint Peter
Saint Peter or Simon Peter was an early Christian leader, who is featured prominently in the New Testament Gospels and the Acts of the Apostles. The son of John or of Jonah and from the village of Bethsaida in the province of Galilee, his brother Andrew was also an apostle...
and Saint Paul
Paul of Tarsus
Paul the Apostle , also known as Saul of Tarsus, is described in the Christian New Testament as one of the most influential early Christian missionaries, with the writings ascribed to him by the church forming a considerable portion of the New Testament...
circle the dome, meeting at a throne with a jeweled crucifix
Crucifix
A crucifix is an independent image of Jesus on the cross with a representation of Jesus' body, referred to in English as the corpus , as distinct from a cross with no body....
resting on a purple cushion.

It took the artists several years to complete these mosaics, as can be clearly seen from the different colors of the stones used to depict the grass at the feet of the apostles. The designs are quite simple, but the excessive use of a gold background should be noted, as it was typically used in this era to infuse these simple scenes with an ethereal glow.

The entire composition is remarkably similar to that of the Orthodox Baptistry of Neon
Baptistry of Neon
The Baptistry of Neon is a religious building in Ravenna, central Italy. The most ancient monument remaining in the city, it was partly erected on the site of a Roman bath...
. The walls are bare, but were not always so. During archaeological investigations, some 170 kilograms of tessera were found on the floor. Due to the lack of Arian references, it is believed that the artists who created the mosaics were orthodox christians, as the ostrogoths were predominately goldsmiths and not mosaic artists.

In 565, after the condemnation of the Arian
Arianism
Arianism is the theological teaching attributed to Arius , a Christian presbyter from Alexandria, Egypt, concerning the relationship of the entities of the Trinity and the precise nature of the Son of God as being a subordinate entity to God the Father...
sect, this small octagonal brick structure was converted into a Catholic
Catholic
The word catholic comes from the Greek phrase , meaning "on the whole," "according to the whole" or "in general", and is a combination of the Greek words meaning "about" and meaning "whole"...
oratory named Santa Maria. Orthodox
Eastern Orthodox Church
The Orthodox Church, officially called the Orthodox Catholic Church and commonly referred to as the Eastern Orthodox Church, is the second largest Christian denomination in the world, with an estimated 300 million adherents mainly in the countries of Belarus, Bulgaria, Cyprus, Georgia, Greece,...
monks added a monastery
Monastery
Monastery denotes the building, or complex of buildings, that houses a room reserved for prayer as well as the domestic quarters and workplace of monastics, whether monks or nuns, and whether living in community or alone .Monasteries may vary greatly in size – a small dwelling accommodating only...
during the period of the Exarchate of Ravenna
Exarchate of Ravenna
The Exarchate of Ravenna or of Italy was a centre of Byzantine power in Italy, from the end of the 6th century to 751, when the last exarch was put to death by the Lombards.-Introduction:...
and further dedicated the structure to Saint Maria in Cosmedin. Around the year 1700, the structure passed into private hands, and in 1914 it was acquired by the Italian government. The Allied bombardment of World War II
World War II
World War II, or the Second World War , was a global conflict lasting from 1939 to 1945, involving most of the world's nations—including all of the great powers—eventually forming two opposing military alliances: the Allies and the Axis...
helped clear away other structures which had encroached on it from all sides, enabling researchers to view the details of its exterior for the first time. As with other monuments in Ravenna, the original floor is now some 2.3 meters underground. 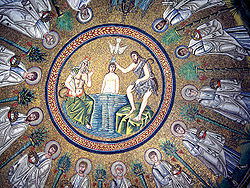 The Baptistry is one of the eight structures in Ravenna registered as UNESCO
UNESCO
The United Nations Educational, Scientific and Cultural Organization is a specialized agency of the United Nations...
World Heritage Sites.