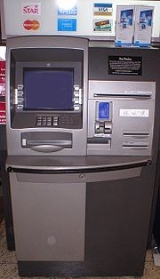 Overview
An automated teller machine or automatic teller machine(ATM), also known as a Cashpoint (which is a trademark of Lloyds TSB
Lloyds TSB
Lloyds TSB Bank Plc is a retail bank in the United Kingdom. It was established in 1995 by the merger of Lloyds Bank, established in Birmingham, England in 1765 and traditionally considered one of the Big Four clearing banks, with the TSB Group which traces its origins to 1810...
), cash machine or sometimes a hole in the wall in British English
British English
British English, or English , is the broad term used to distinguish the forms of the English language used in the United Kingdom from forms used elsewhere...
, is a computerised telecommunications device that provides the clients
Customer
A customer is usually used to refer to a current or potential buyer or user of the products of an individual or organization, called the supplier, seller, or vendor. This is typically through purchasing or renting goods or services...
of a financial institution
Financial institution
In financial economics, a financial institution is an institution that provides financial services for its clients or members. Probably the most important financial service provided by financial institutions is acting as financial intermediaries...
with access to financial transaction
Financial transaction
A financial transaction is an event or condition under the contract between a buyer and a seller to exchange an asset for payment. It involves a change in the status of the finances of two or more businesses or individuals.-History:...
s in a public space without the need for a cashier, human clerk or bank teller
Bank teller
A teller is an employee of a bank who deals directly with most customers. In some places, this employee is known as a cashier. Most teller jobs require cash handling experience and a high school diploma. Most banks provide on the job training....
. ATMs are known by various other names including ATM machine, automated banking machine, and various regional variants derived from trademark
Trademark
A trademark, trade mark, or trade-mark is a distinctive sign or indicator used by an individual, business organization, or other legal entity to identify that the products or services to consumers with which the trademark appears originate from a unique source, and to distinguish its products or...
s on ATM systems held by particular banks.

What are the requirements to qualify for free ATM machine placement ?

Dear All, i am getting some problem in installing,software at one of my atm machine,atm model is wincor nixdrof 1500xe front loading,i am using t...
More

How atm is connected to mainserver? what kind of network is established between atm and server? how is the information transferred quickly?

2. What can be the danger of using Automated Teller Machine?