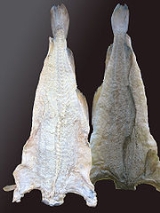 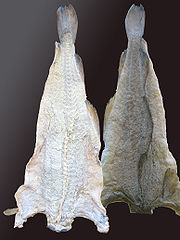 Bacalhau is the Portuguese
Portuguese language
Portuguese is a Romance language that arose in the medieval Kingdom of Galicia, nowadays Galicia and Northern Portugal. The southern part of the Kingdom of Galicia became independent as the County of Portugal in 1095...
word for codfish and—in a culinary context—dried and salted codfish. Fresh (unsalted) cod is referred to as bacalhau fresco (fresh cod).

Bacalhau dishes are common in Portugal
Portugal
Portugal , officially the Portuguese Republic is a country situated in southwestern Europe on the Iberian Peninsula. Portugal is the westernmost country of Europe, and is bordered by the Atlantic Ocean to the West and South and by Spain to the North and East. The Atlantic archipelagos of the...
and Galicia, in the northwest of Spain, and to a lesser extent in former Portuguese colonies like Angola
Angola
Angola, officially the Republic of Angola , is a country in south-central Africa bordered by Namibia on the south, the Democratic Republic of the Congo on the north, and Zambia on the east; its west coast is on the Atlantic Ocean with Luanda as its capital city...
, Macau
Macau
Macau , also spelled Macao , is, along with Hong Kong, one of the two special administrative regions of the People's Republic of China...
, and Brazil
Brazil
Brazil , officially the Federative Republic of Brazil , is the largest country in South America. It is the world's fifth largest country, both by geographical area and by population with over 192 million people...
. There are said to be over 1000 recipes in Portugal alone and it can be considered the iconic ingredient of Portuguese cuisine (but curiously the only fish that is not consumed fresh in this fish-loving nation). It is often cooked on social occasions and is the Portuguese traditional Christmas dinner in some parts of Portugal.

Similar recipes can be found across Europe. It is also found in the cuisines of other territories and regions like Dominican Republic
Dominican Republic
The Dominican Republic is a nation on the island of La Hispaniola, part of the Greater Antilles archipelago in the Caribbean region. The western third of the island is occupied by the nation of Haiti, making Hispaniola one of two Caribbean islands that are shared by two countries...
and Puerto Rico
Puerto Rico
Puerto Rico , officially the Commonwealth of Puerto Rico , is an unincorporated territory of the United States, located in the northeastern Caribbean, east of the Dominican Republic and west of both the United States Virgin Islands and the British Virgin Islands.Puerto Rico comprises an...
. In Norway
Norway
Norway , officially the Kingdom of Norway, is a Nordic unitary constitutional monarchy whose territory comprises the western portion of the Scandinavian Peninsula, Jan Mayen, and the Arctic archipelago of Svalbard and Bouvet Island. Norway has a total area of and a population of about 4.9 million...
where most of the salted and dried cod are produced, bacalao is one special dish, usually prepared with dried fish, potatoes, and onion.

The essential ingredient, salted dried codfish
Dried and salted cod
Dried and salted cod, often called salt cod or clipfish , is cod which has been preserved by drying after salting. Cod which has been dried without the addition of salt is called stockfish....
, usually comes from Norway
Norway
Norway , officially the Kingdom of Norway, is a Nordic unitary constitutional monarchy whose territory comprises the western portion of the Scandinavian Peninsula, Jan Mayen, and the Arctic archipelago of Svalbard and Bouvet Island. Norway has a total area of and a population of about 4.9 million...
(bacalhau da Noruega), Iceland
Iceland
Iceland , described as the Republic of Iceland, is a Nordic and European island country in the North Atlantic Ocean, on the Mid-Atlantic Ridge. Iceland also refers to the main island of the country, which contains almost all the population and almost all the land area. The country has a population...
(bacalhau da Islândia) or Newfoundland (bacalhau da Terra Nova). It used to be very affordable, but with the collapse of the cod stocks
Overfishing
Overfishing occurs when fishing activities reduce fish stocks below an acceptable level. This can occur in any body of water from a pond to the oceans....
and dismantling of Portuguese bacalhoeiro fleet, it became more expensive, especially near Christmas time, since it's a part of many traditional dishes of the holiday season.

Salt cod has been produced for at least 500 years, since the time of the European discoveries of the New World
New World
The New World is one of the names used for the Western Hemisphere, specifically America and sometimes Oceania . The term originated in the late 15th century, when America had been recently discovered by European explorers, expanding the geographical horizon of the people of the European middle...
. Before refrigeration
Refrigeration
Refrigeration is a process in which work is done to move heat from one location to another. This work is traditionally done by mechanical work, but can also be done by magnetism, laser or other means...
, there was a need to preserve the codfish; drying
Drying (food)
Drying is a method of food preservation that works by removing water from the food, which inhibits the growth of microorganisms and hinders quality decay. Drying food using sun and wind to prevent spoilage has been practised since ancient times, and was the earliest form of food curing...
and salting are ancient techniques to preserve nutrients and the process makes the codfish tastier.

The Portuguese tried to use this method of drying and salting on several varieties of fish from their waters, but the ideal fish came from much further north. With the "discovery" of Newfoundland in 1497, long after the Basque
Basque people
The Basques as an ethnic group, primarily inhabit an area traditionally known as the Basque Country , a region that is located around the western end of the Pyrenees on the coast of the Bay of Biscay and straddles parts of north-central Spain and south-western France.The Basques are known in the...
whaler
Whaler
A whaler is a specialized ship, designed for whaling, the catching and/or processing of whales. The former included the whale catcher, a steam or diesel-driven vessel with a harpoon gun mounted at its bows. The latter included such vessels as the sail or steam-driven whaleship of the 16th to early...
s arrived in Channel-Port aux Basques, they started fishing its cod-rich Grand Banks
Grand Banks
The Grand Banks of Newfoundland are a group of underwater plateaus southeast of Newfoundland on the North American continental shelf. These areas are relatively shallow, ranging from in depth. The cold Labrador Current mixes with the warm waters of the Gulf Stream here.The mixing of these waters...
. Thus, became a staple of the Portuguese cuisine
Portuguese cuisine
Portuguese cuisine is characterised by rich, filling and full-flavored dishes and is closely related to Mediterranean cuisine. The influence of Portugal's former colonial possessions is also notable, especially in the wide variety of spices used. These spices include piri piri and black pepper, as...
, nicknamed (faithful friend). From the 18th century, the town of Kristiansund
Kristiansund
Kristiansund is a city and municipality on the western coast of Norway, in the Nordmøre district of Møre og Romsdal county. It was officially awarded township status in 1742, and it is still the major town for the region. The administrative center of the municipality is the city of Kristiansund...
in Norway
Norway
Norway , officially the Kingdom of Norway, is a Nordic unitary constitutional monarchy whose territory comprises the western portion of the Scandinavian Peninsula, Jan Mayen, and the Arctic archipelago of Svalbard and Bouvet Island. Norway has a total area of and a population of about 4.9 million...
became an important place of purchasing bacalhau or klippfisk (literally "cliff fish", since the fish was dried on stone cliffs by the sea to begin with.)Since the method was introduced by the Dutchman Jappe Ippes in abt 1690, the town had produced klippfisk and when the Spanish merchants arrived, it became a big industry. The bacalhau or bacalao dish is sometimes said to originate from Kristiansund, where it was introduced by the Spanish and Portuguese fish buyers and became very popular. Bacalao was common everyday food in north west Norway to this day, as it was cheap to make. In later years it is more eaten at special occasions.

This dish was also popular in Portugal and other Roman Catholic countries, because of the many days (Fridays, Lent
Lent
In the Christian tradition, Lent is the period of the liturgical year from Ash Wednesday to Easter. The traditional purpose of Lent is the preparation of the believer – through prayer, repentance, almsgiving and self-denial – for the annual commemoration during Holy Week of the Death and...
, and other festivals) on which the Church forbade the eating of meat. dishes were eaten instead.

Bacalhau is also popular in Sfax
Sfax
Sfax is a city in Tunisia, located southeast of Tunis. The city, founded in AD 849 on the ruins of Taparura and Thaenae, is the capital of the Sfax Governorate , and a Mediterranean port. Sfax has population of 340,000...
where this dish is eaten in the first day of Eid ul-Fitr
Eid ul-Fitr
Eid ul-Fitr, Eid al-Fitr, Id-ul-Fitr, or Id al-Fitr , often abbreviated to Eid, is a Muslim holiday that marks the end of Ramadan, the Islamic holy month of fasting . Eid is an Arabic word meaning "festivity," while Fiṭr means "breaking the fast"...
with charmoula.

There are numerous bacalhau recipe variations, depending on region and tradition.In Portugal, it is said there are more than 365 ways to cook bacalhau, one for every day of the year; others say there are 1,001 ways. Whatever the exact number, bacalhau is an ubiquitous ingredient in Portuguese cuisine.

Bacalhau is often served with potatoes. Green (Vinho Verde
Vinho Verde
Vinho Verde is a Portuguese wine from the Minho region in the far north of the country. The name literally means "Green Wine" , referring to its youthful freshness that leads to a very slight green color on the edges of the wine. The region is characterized by its many small growers, which...
) or mature wines (Alentejo Wine, Dão Wine, or Douro Wine) are served alongside.

Some Regional Bacalhau dishes include:

Besides the dishes listed above, there are the bolinhos de bacalhau (term used in the north of Portugal and in Brazil
Brazil
Brazil , officially the Federative Republic of Brazil , is the largest country in South America. It is the world's fifth largest country, both by geographical area and by population with over 192 million people...
) or pastéis de bacalhau (term in the south of Portugal): literally "Codfish cakes", made up of potatoes, eggs
Egg (food)
Eggs are laid by females of many different species, including birds, reptiles, amphibians, and fish, and have probably been eaten by mankind for millennia. Bird and reptile eggs consist of a protective eggshell, albumen , and vitellus , contained within various thin membranes...
, parsley
Parsley
Parsley is a species of Petroselinum in the family Apiaceae, native to the central Mediterranean region , naturalized elsewhere in Europe, and widely cultivated as an herb, a spice and a vegetable.- Description :Garden parsley is a bright green hairless biennial herbaceous plant in temperate...
, and some minor ingredients with dry salted codfish. The bolinhos or pastéis de bacalhau are fried and served cold before meals. Similar delicacies are the "pataniscas de bacalhau" and the "iscas de bacalhau", which are often only served in traditional tabernas (taverns) in Northern Portugal and often preferred by older people.

"Bolinhos de bacalhau" in Brazil are usually served in bars as an appetizer consumed with beer.